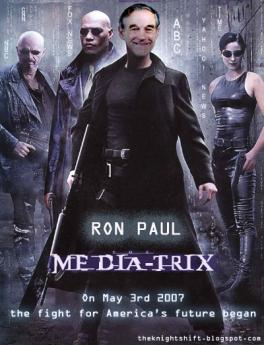 We witnessed an amazing event November 5th when the Ron Paul campaign raised some $4.2 million, almost entirely over the internet; thanks to the independent www.ThisNovember5th.com effort involving over 36,000 donors. The lamestream media were forced to take notice and report the unprecedented result that day. Indeed the Lamestream Idiot Media Pundits (LIMPs) were so impressed that some managed to report the event without adding their usual comment that Ron Paul has no chance of winning. Could it be that it’s starting to occur to them that he might?
If so, then maybe we should find a way to bring their nightmare into sharper focus. I mean, seeing as how they’ve been so fair and balanced in their coverage of Ron Paul to date. It’s a rare report indeed where the LIMPs aren’t dismissive, disingenuous, and downright dishonest in their coverage of Ron Paul, his campaign, and his supporters. To be fair, outlets such as The Daily Show and The Tonight Show have treated Paul with the dignity and respect he deserves; but those are entertainment shows rather than news outlets.
If at first you DO succeed
There’s no point in whining or worrying about it though. As November 5th has proven, nothing succeeds like success. We’ve shown them we can do something they hadn’t imagined possible. We simply need to do it again, only bigger and better this time. It’s time to convince them that we can do something that they believe is impossible. Once we convince them of that, they’ll do the job of convincing their audiences – intentionally or not.
In other words, it’s those of us who support Ron Paul who will decide the outcome in 2008; thanks to our ability to bypass the lamestream media. We need to both co-opt and correct the cynical Fox News slogan – We Decide. You Just Report. At some point, the LIMPs will try and convince everyone, including themselves, that they were the deciding factor. Of course, by that time they’ll probably have to wait for their audiences to get home from a Ron Paul rally.
How deliciously ironic. Can’t you just picture it now – Rupert Murdoch at the Republican convention delivering Ron Paul’s nominating speech. Sweet! Okay, maybe not. I guess we’ll have to settle for savoring the look on John Roberts’ face as he delivers the oath of office to Ron Paul.
Anyhow, this is all just my rather lengthy lead in to what I’m really getting at. Namely, how to top November 5th in such a way that everyone will sit up and take notice. In fact, I think the only downside to November 5th is that we have to do better before anyone will notice this time. Anything less is passé at this point. Fortunately, I think we’re positioned do much better and here’s how.

It’s a helluva start…
First take the basic blueprint and duplicate it. Done, thanks to the talented people who brought us www.ThisNovember5th.com. Enter www.TeaParty07.com. As before, the goal is to get 100,000 people online to donate $100; this time on December 16th to commemorate the Boston Tea Party which took place on that date in 1773. This is a great idea, as it’s only fitting that our latter day revolution should pay homage to its historical ancestor.
It could be made into a monster…
TeaParty07 is a great opportunity to multiply our media coverage this time around. To do so we need only add a little splash of political theater to the effort. Supporters around the country can gather together that day, dressed as Indians, to take turns sitting at a computer to make their donations. It will be a nationwide rally with an online fundraising twist. Naturally, you can dress it up as you see fit by serving tea, maybe tossing teabags into a body of water, or whatever. But a group of people gathered together dressed as Indians to make their TeaParty07 contribution should be the common theme.[i] This provides a great LOCAL media hook and each local event should be independently planned, and promoted accordingly.[ii]
…If we all pull together as a team!
The great strength of the Ron Paul Revolution is in the number and diverse talents of its supporters, who all share a love of the ideas that Ron Paul embodies. There are hundreds of MeetUp groups, as well as countless individuals and informal groups blanketing the country. They’ve all done incredible things to promote Ron Paul to date. TeaParty07 is a unique opportunity for all of them to join together for one day in a common effort. The best part is that the effort needs no central planning. It’s simply an idea to be voluntarily adopted and implemented by Ron Paul supporters in their own home towns, and tailored to suit each locality.

Throughout the campaign to date, the lamestream media and online opponents have tried to pass the Ron Paul Revolution off as the work of either nefarious  Spambots or a few geeky “Paultards” who don’t really exist outside of some online poll. The time is ripe for us all to step out from behind our computers and emerge simultaneously in both local and national news media in a way that leaves no doubt that we’ve gone off the reservation to reclaim our birthright.

You can read more from Mike Dugger at his blog.
________
[i] Not that this is a particularly original idea on my part; I know of at least one group in the Midwest that is planning an event along these lines. I have no doubt that others are planning, or at least considering, activities for December 16th as well. This is merely a natural expansion of the TeaParty07 idea that should be considered by supporters while there is still plenty of time to prepare.
[ii]  See my quick and dirty TeaParty To-Do List for my suggestions and some important considerations for a rally of this nature.

One way or the other, our LiberTea Party is going to make news... and Mike is right, we can make it even MORE memorable!

One suggestion I've heard is to place a Ron Paul sign/bumper sticker on the steps of your Capitol Buildng with a box of tea. Can you picture it? Piles and piles of Ron Paul signs and boxes of tea!

I'd also urge you all to check out VoteFraud.org. I have nothing to do with this site personally, but it is a real eye opener.