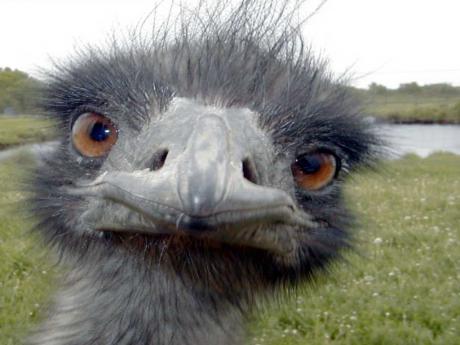 It's a short story,... but it definitely registered high on my 'Weird Shit-o-Meter'.
I live in a quiet neighborhood in a middle class part of Central Phoenix that is unremarkable.
It is rare that my wife and I have the living room to ourselves with no kids or their friends coming in and going out. Donna was on her computer sitting in her chair while I just sat down from working in the back yard. The 100th episode of "Dirty Jobs" was on the Discovery Channel so I took a rare moment to watch TV with my wife 'home alone'.
"Knock Knock Knock" on the door. Which was followed immediately by our two small dogs going into their barking fits and my wife and I both yelling, "Come in". Often the knocking is followed immediately by friends of ours or our children just walking in after a 3 Mississippi count that gives us time to say, "just a minute" in case we are naked or something (kind'a the deal we made with our kid's friends :)
When nothing was said and the door didn't open I said "come in" louder (I think Donna did too). Then we heard a voice that sounded like it was from the front yard saying "Phoenix Police mumblemumble".
WHATEVER!
Not only are the police here but I just sat down and now they are going to make me get up off the couch.
I think I had to turn on the front light,...then I squeezed past the dogs at the front door that start freaking out when they saw uniforms. Our mailbox is right next to the door and the daily mail carrier show the dogs put on is a sight to behold. I walk out with Donna following me a few moments later with our toy poodle (hey, it's my wife and son's dog).
A few words were exchanged about the dogs and uniforms and then one of the '20 something' officers said, "We are just randomly checking homes in the neighborhood due to a few anonymous reports of strange smells. Have you smelled any gas or anything else this evening?" They seemed pleasant enough and I wasn't too irritated since my 9 pound attack dogs had them in their sights. I also took them at their word and thought for a moment about their question. My wife told them that I was using a torch in the back yard doing some repairs on our small trailer  but I knew that wasn't it.
It was then that I think the spokesperson for the group saw my mental processing wasn't making sense of what was happening and they excused themselves and were on their way
This all took place in less than 90 - 120 seconds.
Since they were quick and didn't make any focused effort to piss me off (other than being there in the first place), I chose a pleasant photo to represent "officer Friendlies"

But I do have some questions.
As a reader of FreedomsPhoenix you could think of many reasons why I might get such a visit, 'just to say hello', but what if this is 'normal'?
I've had officers come to my home before when someone sat on the phone and accidently hit the speed dial number for 911. But this was definitely a first.
Three officers? Why police and not utility guys? This is what they spend their time on?
All it takes to get a sweep done of a neighborhood is to anonymously report a smell? Hell, if you get your car stolen right in front of you the Phoenix police do a report over the phone.
What I truly fear is that soon these sort of "visits" will become common and won't be so friendly.
Ernest Hancock
Publisher - FreedomsPhoenix

They were looking for a meth lab.

It sounds like the SOP for checking houses that are reported (by "someone") to be eminating smells associated with covert drug labs.

It doesn't mean that Phx. P.D. is in on it. Someone may have taken it upon themselves to harrass you, and is using their ability to report annonymously to get Phx. P.D. to do it for them. It COULD be as simple as someone who doesn't know what welding smells like calling in that there's a lab next door!

If you wanted to followup, you could request a copy of the police report or dispatch record associated with the alleged anonymous report of strange smells that prompted three cops to show up on your property.

If they balk at giving you a copy (assuming one exists) then the State Open Records Law can be invoked.

If they claim such a report doesn't exist, you could request a copy of their departmental guidelines for generating police reports to determine under what circumstances police reports and/or dispatch records are required to be generated....

One wonders why they were not separately going door to door, since they could cover the houses in the affected area in a third the time. Something generally considered critical in a gas leak. Kaboom!

Perhaps it was the recent purchase of a bottle of Febreze at Fry's detected by the NSA/Homeland Security's computers and relayed via the DEA to the Phoenix PD for investigation.