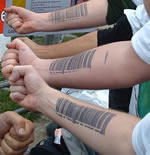 Dear Ron Paul Friends
Today is our first round in our fight to take back our freedoms and this I the biggest OK we can give to those of us who think we are only cattle.
The Real ID Act of 2005
I have important information on it if you want it to use to get informed on this and to inform others. The most Disturbing thing that even surprised me is that this is not a National ID card but an International ID
Mark Lerner was one of the people working on the Read ID Act when his eyes were opened to what this was going to be used for.
Here is only a part of the information I can send you when you ask but this is something we cannot wait on and some we can do right now.  So tell your friends or anyone else what is happen.
REAL ID-BIOMETRIC FACT SHEET
Final Rules
The Final Chapter in a Systematic Plan for a Single Global Biometric ID System
Submitted by the STOP REAL ID COALITION –an association of concerned citizens
The REAL ID ACT of 2005 does not create a national ID card but an INTERnational BIOMETRIC ID card
The world is being enrolled into a single global biometric ID system through driver’s license/ID cards (DL/ID cards),
passports and other ID documents. Biometrics, like facial recognition, digital fingerprinting and iris recognition, are
already being used by many states and nations. The federal government attempted to impose biometrics on state ID in
1986i. International biometric plans were laid in 1995ii. Both predate 9/11. The biometrics required by REAL ID,
other security laws, initiatives, treaties and agreements, are not needed tools against terrorism, but the fulfillment of a
global biometric ID system.
On March 1st, 2007 REAL ID’s “Notice of Proposed Rulemaking” (NPRM) was issued, revealing REAL ID’s global
biometric connectioniii. The three main entities driving this system are:
1. The Department of Homeland Security (DHS)
2. The American Association ofMotor Vehicle Administrators (AAMVA)
3. The International CivilAviation Organization (ICAO)
AAMVA is an international association of motor vehicle and law enforcement officialsiv. AAMVA is responsible for
international biometric DL/ID card standards and an international information sharing agreement, the “Driver License
Agreement” (DLA)v. Themost recent AAMVA DL/ID standard is the 2005 “Personal Identification –AAMVA
International Specification- DL/ID Card Design.vi”This DL/ID standard, DLA and other document standards are
requirements, cited in REAL ID HR418vii and/or NPRMviii. AAMVA’s influence over international, federal and state
DL/ID card laws is evident in REAL ID (mentioned 30 times in NPRMand 150 times in REAL ID final rules 01-11-
08) viii.
A Letter from A Ron Paul Supporter
Dear Friends,

This is a supplement to what I sent you about the Real ID act*, and the opportunity for us to convince our Assemblymen and Senators to opt out of it here in California , if done before May 11.

I looked up the numbers, wrote up something, and called both my Assemblyman and my State Senator's offices (both Democratic)

The response was interested, cordial, not hasty --  and both receptionists thanked me for calling them - they wanted details on the bill I was supporting - the number and what it was called,(AJR 51 by Assemblyman Pedro Nava), my name and phone number. The Assembly office wanted my address and email address, too.   The Senate office said, in addition," I really appreciate your calling.  It would help if you write and send emails also."

This corroborates what I have heard before:  Assemblymen do not  receive many calls from their constituents, so they get the impression we don't care what they do!

And when someone does call, they really appreciate it .   This probably means that one person calling is really speaking for hundreds more voters who don't call.

A few people calling can make a difference.  So don't conclude that your call will not have an effect.  It will.  One extra call could well be the one that pushes the assemblyman over the top to vote in a certain way.   If they have support from a few voters who represent actually many more than that, they can stand up to lobbyists by saying,’” well, my constituents don't want that."

So, give it a try. I had to overcome some resistance to do it, but I'm so glad I did.   Emails are still effective, faxes and letters more so, but calls have   the greatest impact I think, especially on a State level. And all three or four are even better.

I've only just learned about Biometric ID since my driver's license is about to expire in 2 weeks and I've heard I must now get a 'Real ID'.. I live in Arizona now but my license was issued in Maryland. Is there any way to opt out? Thank you!