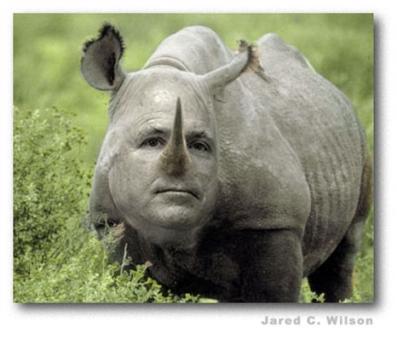 http://www.dailypaul.com/node/47172
(Here is your Scoop!) What really happened at the Nevada GOP Convention....
(UPDATES ADDED at end as news comes in)
Ron Paul Speaks Part 1
Ron Paul Speaks Part 2
HOW MUCH YOU WANT TO BET THAT THE NEVADA STATE GOP CALL THE CONVENTION BACK TO ORDER SUNDAY MORNING? - Think the Ron Paul supporters will hear about it? - I'll bet the rules allow them to call it with as few as however many delegates they need. So even 50 Ron Paul Supporters there might be good insurance,... but then you'd have to find the Denny's they are at :)

Thats how the scumbags lookout for their own,
now is McCain a scumbag or what?

OK! This was yesterday ... old news! Did anybdy think to get video of the "other" activities after Ron left the podium? Has anything happened since? Any follow-up at all? I'm sure we would all appreciate hearing & or seeing it! Yesterday sounds like it was very invigorating ... like dry sex ... lol!

Well,...this has gotten big enough that it is getting hard to hide. As of now, the story has made the Top News Headlines of the Yahoo.new Politics Page.

I'm really looking forward to the details of how a bunch of "non-existent" freedom supporters exposed the GOP for what it is. THIS is the WIN that I have been working very hard for. It is the "system" that is the enemy (and the Bad Guys that always wind up in charge of it).

This is the salient reason for Ron Paul supporters to go to their relevant convention. To see the games that are played when things do not go as scripted by the bad guys. This is how the system is set up. How else does a 71-year old politically broke and mentally crippled candidate with no money suddenly get new life when the media has declared him dead? The rules of the system (and laws of the nation) are ignored with impunity by the very Senator who wrote them with nary a peep from our guarantors of the 1st Amendment: The formerly mainstream media. They are ignored by the Federal Elections Commission. They are ignored by every state and county elections department. And virtually every local to state to national GOP.

The rules are made to keep the "wrong" person from getting elected, not to ensure the people have a choice -- but to make sure they do not, while making it appear the selection process if fair and open in all steps along the way. This exposes for some the entire sham. Beautiful!

I think all of these law breakers should have their pictures pasted all over their neighborhood.
These scum bags should be exposed for what hey are.
%90 of America has no idea of what these crooks are doing to us. Let everyone know what these traitors are up to,even their children,pastor.

another account from an attendee:
http://www.youtube.com/watch?v=bknGz9TtEHE
He states he'll be uploading more vid from the convention, check his profile for updates.

Here is a link to my account of the events.

The number of seated delegates was 1347, the larger number was the total attendees with delegates, press, and guests.