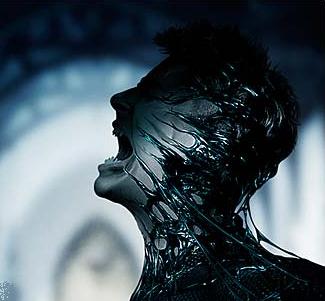 In Joe**Q**s Place, no one can hear you scream!
I am no longer trying for objectivity here. After reviewing a lot of court documents I am 95% certain Mr. Stuart has a good self defense case.

John Stuart had a hearing today for his false paperwork filing felony charge.

Recap: John Stuart was returning home from hanging Ron Paul signs with his fiancée one night when he was attacked by a road raging drunk driver at an intersection. He certainly did things that exacerbated a bad situation. He ultimately was charged with murder after a gun went off in his car and the dead guy was left lying in front of his own vehicle. John fearing for further action from the dead guy's wife or his friends fled to his house which was a mile and a half away. Where his fiancée left in her car to go to her fathers and to call police on the way. Mr. Stuart was pulled over and arrested on his way to his lawyers, eight minutes after leaving the scene of the shooting.

In Arizona you have a Constitutional Right to bail, and not excessive bail. His fiancée paid his bail of $46,000. As I have found out, the state really, really hates it if you can afford to pay your bail rather than going through a bail bondsman who will constantly track you without it costing the government a dime.

So bolstered by protests from friends of the deceased the Maricopa County Attorney's office arranged for a new bail hearing. Not that Mr. Stuart was not cooperating with his bail conditions, which included the unusual requirement he wear a tracking device (--he was not considered a flight risk). He was fully cooperating, but the County Attorney wanted a half million dollar bail to break Mr. Stuart's ability to pay for good legal representation and to keep Mr. Stuart in jail. A balless judge compromised at a bit under a quarter million for new bail.

Now keep in mind, nothing had changed. Mr. Stuart was no more a flight risk at the initial bail hearing than he was at the new one. He had cooperated along the way. He was a home owner. A businessman whose business required that he be contactable and responsive at all times. His self defense case looked good. He had hired one of the best attorneys available. But a balless judge just couldn't tell the County Attorney “no” to a bail increase. Why? Because a quarter million dollars bail put Mr. Stuart in need of a bail bondsman who monitored his movements – risking a $230,000 loss if Stuart skipped. Mr. Stuart was now out 10% or $23,000.

This was not good enough for the Maricopa County Attorney's office Mr. Stuart or someone filed additional paperwork with the court. This paperwork was accepted, then later rejected because it did not come from Mr. Stuart's attorney (like that is an excuse for rejecting filed documents), [As a note, it turns out these documents may very well have “come” from Mr. Stuart's attorney -- who laid the paperwork upon the bailiff's counter top in Judge Steinle's courtroom, causing the judge to both accept and then reject the paperwork.] and this was then used by the Maricopa County Attorney to file felony charges against Mr. Stuart alleging false documents. Mr. Stuart was rearrested and held without bail under Arizona law allowing no bail in situations where a person charged with a felony is rearrested on a second felony.

So here you have it; two cases, one involving homicide the other filing false paperwork. A couple of weeks ago I showed up to a hearing on the criminal case in which the judge was asked to either dismiss all charges or remand the case back for consideration by the grand jury. Instead the judge withdrew from the case due to prejudice. Wow!

So now we have a hearing on the other case; false document filing.

What went on? Two issues:

This case was designated by Judge Steinle -- who later recused himself -- as a “complex case,” on April 25, before it was assigned to Judge Mroz. And there is no minute entry explaining or crediting this designation. I am not sure what the ramifications of this were, but neither the defense nor the prosecution apparently knows who requested such a designation. In addition, neither sees why this would be a “complex case.”  The judge seems determined to either find an explanation for this designation or to remove it.

Do I know what this means? I have not a clue.

The second aspect of the hearing was done off microphone and off record. June 5th, Judge Mroz will hold a evidentiary hearing in which the prosecutor must provide proof that a crime has taken place. There are some strong indications the prosecution will be unable to do this. That this will turn out to not be a crime, that what transpired cannot be declared a false filing. [Additionally, according to minute entries, the prosecutor is coincidentally  supposed to answer the defendants numerous motions by June 6th. ]

This means with charges dropped with prejudice Mr. Stuart should be back to being bailable, probably at the $230,000 of the prior bail.
However, it should be noted that this new charge was deliberately done by the prosecutor to get Mr. Stuart in jail without the possibility of bail. Why a prosecutor would do this is open to debate. That the prosecutor did it says they do not want Stuart out and about assisting with his defense. Interesting.
Bottom line: Expect the taxpayers to pay out a sizable false arrest and imprisonment claim in the next few years. My understanding is his fiancées had lost tens of thousands of dollars so far on this new charge, and hundreds of thousands on defending and bailing her future husband. [And RICOing Stuart's SUV and its contents is a prosecutor top priority - hence the added  "drive by shooting" charge.] A guy who is no risk to the community, no flight risk and has a pretty good case of self defense. Justice Andrew Thomas style. 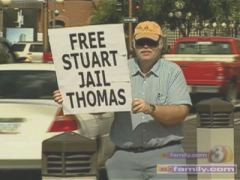 [Very nice! The judge wants to get this done.]

I just got the word that Commission Newell contacted judge Rosa Mroz and asked her to move up the date of John Stuart's hearing on the filing a false instrument case to 10:00 on Monday June 2, 2008. Superior Court, Central Court bldg. 201 W. Jefferson 11th floor suite 11 E.

Please show up if you can. This is the case with the bogus charge of filing a false instrument. This case could be thrown out on Monday, and John should be able to get bail again on the self defense case. We need to have as many people there as we can. Thanks in advance everyone!

The next court date for John Stuart's filing a false instrument case is June 5, 2008 at 8:30. 201 W. Jefferson in the Superior Court Central Court building 11th floor suite 11 E. The judge is Rosa Mroz. After today's hearing, there is a good change this case may get dismissed on the 5th. Thanks to all of you that came today or wished John well. I hope we can fill up the court room again on the 5th!

Thanks Powell for your article and dedication to getting the truth out about this case. A complex case designation would push back the hearing dates, for the filing a false insturment case, to at least September, and perhaps a year. This is done when preparing for a long trial, and need to have time to prepare for witnesses that are out of town. Certainly not necessary in this case.
It should also be noted, this is not the first time the prosecutor falsely charged John. She had him arrested before when the IRS only put a lien on the bail I posted. They specifically said they were not confiscating the bail, only liening it. She had him arrested claiming his bail was revoked. Since I posted the bail, I hired an attorney to prove the bail money came from me, and I was able to get John released the next day. It should be noted, John has never been taken to court by the IRS. He has asked them over and over for a verified assessment of how they determined the amount they claim he owes them.