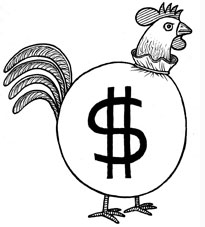 by U.S. Rep. Ron Paul, M.D. (R-TX)
Recently Congress sent the latest Farm Bill to the president. The bill features brand new federal programs, expansion of existing subsidies, more food stamps and more foreign food aid. This bill hits the taxpayer hard, while at the same time ensuring food prices will remain elevated.  The president vetoed the bill, citing concerns over its costs and subsidies for the wealthy in a time of high food prices and record farm income. Nevertheless, this over-reaching, government-expanding Farm Bill will soon be law.

The truth is most farmers simply want honest pay for honest work. However, if the government is providing competing farms with advantages, and one wants to remain a farmer, one must seek a proportional advantage from government.  It is a difficult position for the farmer.  Some are better at qualifying for taxpayers’ largesse than others as evidenced by the fact that more than 60% of the subsidies go to just 10% of recipients, edging out the small family farm.  This entire system is unfair and demoralizing.  It disproportionately benefits big agribusiness at the expense of struggling family farms.

Third world countries also lose with these continued government manipulations. Agricultural subsidies lead to overproduction, which leads to foreign food aid as a form of dumping.   By “dumping” government-created agricultural surpluses, agrarian economies are artificially kept in a constant state of economic depression. The would-be third world farmer cannot compete with “free” grain, thus he and his countrymen remain perpetual beggars rather than competitive producers.  Also, by keeping food prices high, we keep more of our own citizens dependent on government food stamps, instead of paying fair market prices for food.

Free trade helps farmers and consumers much more than this convoluted system of subsidies, surpluses and central planning.  Newly opened markets would create increased demand for what we produce. There is absolutely no reason we trade with China , yet not with Cuba .  With energy and transportation prices as high as they are, opening up trade with a country as close as Cuba just makes sense.  The recent power shift from Fidel Castro to his brother Raul, and the somewhat positive steps he has taken, provides an opportunity to lift the embargo.

Removing unreasonable, confiscatory tax policies would also make good farm policy. We need to permanently repeal the estate tax, which would again take a devastating 55% cut of family farms upon death of an owner. This tax will force the sale of many family farms, and further huge corporate agriculture.

Those who believe federal farm programs benefit independent farmers, should take note that after 70 years of this type of government intervention, small farms continue to struggle while large corporate farms control an ever-increasing share of the agricultural market.  Subsidies for agribusiness should be stopped and the free market should be allowed to work. With commodity and food prices on the rise, Congress had an opportunity to scale down government controls and taxpayer funding of agriculture. Instead, despite the warning sent by an 18% approval rating, Congress stubbornly opted for more of the same.
source