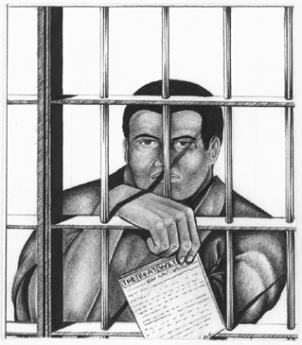 
Two hearings, back to back.  First (CR2008-006332) involved the filing of false documents charge [filed to deny him bail].  This was mainly administrative, and the judge ruled upon no objection from either side, that this case was a "simple case" and not a "complex case" as it had been labeled by party unknown, which would have delayed the trial needlessly.  A hearing to schedule a trial date will take place in August.  Clearly the trial will not be scheduled before September, due to conflicts of both sides and the judge.

The second hearing (CR2008-106594) was more interesting.  It involved the murder charge and presumably the drive by shooting charge [filed to RICO his vehicle and melt down his guns]. Here, the defense was requesting the charges be dismissed or remanded back to the grand jury.  The judge had the choice of denying the motions and letting the trial proceed, dismissing the charge with or without prejudice, the latter allowing the charges to be refiled, or remanding the case back to the grand jury for them to reconsider the charges.

I figured there was no way in hell the judge would dismiss the charges unless prosecutor misconduct could be overwhelmingly demonstrated.  While there have been some problems, they did not appear to me to compel a judge to dismiss the charges, particularly with prejudice.  But I thought there was a reasonable chance the judge would remand this back into a grand jury's lap.  It costs the judge nothing to do this.  It may clean up much of the can of worms this case has become.  And he may or may not get a case returned to his docket.  To Stuart, remanding back to the grand jury gives him a chance the grand jury will refuse to indict; in which case the prosecutor will probably resubmit -- because I am fairly certain Stuart will not do a plea agreement if it was offered -- to a third grand jury.  But it does eliminate the charge.  He would be bailable on the felony false filing charge.  But he does not get his vehicle back...innocence matters not when the state grabs your property.  It will delay his trial -- if any -- by a few weeks if the second grand jury indicts.

Cari McConeghy-Harris started things off for the defense, essentially reviewing the request for dismissal/ remand back to the grand jury.   You really ought to read this document.  It spells out how a prosecutor gets a ham and swiss sandwich indicted if she wants it.  Needless to say the request is due to defense claims of prosecutoral and police misconduct and collusion in front of the grand jury to get the outcome they desired rather than have the grand jury decide if enough evidence exists for the charges to proceed to a courtroom.  Presenting only facts likely to get an indictment, and avoiding facts indicative of self defense.  The grand jury is entitled to all the facts and to know what the law provides as defenses.  Ms. Charbel the prosecutor was being accused of presenting one side to secure the indictment -- a violation of grand jury procedure.  This document does a great job of explaining the grand jury system.

Ms. Charbel did not deny the litany of the presentation except to initially claim that all pertinent defenses were presented to the grand jury.  But the Judge clearly was having none of that.  He acknowledged the 404, and 405 defenses, but wanted to know if she had mentioned the 418 defense? She first lied to the judge [Yes lied, she is an officer of the court and not entitled to use lawyer weasel words to not answer a direct question from the judge.] by distracting with a statement that all required defenses were presented and the grand jurors had a copy of the statutes that they could look up if they wanted to.
Keep in mind the grand jurors are people like me and you.  No legal background.  How would you like a copy of ARS Title 13  and be expected to see if there was justification to proceed or not proceed with charges?
Since there were transcripts of the grand jury proceedings and Charbel clearly did not inform the grand jury of the fact that there was no obligation of someone to retreat when being attacked in their occupied vehicle, and that use of deadly force can be justified if reasonable fear of life or harm is present and if the person killed was in the process of unlawfully or forcefully entering, or had unlawfully or forcefully entered, a occupied vehicle, or had removed or was attempting to remove another person against the other person's will from the occupied vehicle.  ... well lets just say it was fun to watch Charbel essentially claim she was unfamiliar with 418.
The judge charitably said, well it is a new statute, only on the books the last three years.  Still, the John Stuart case is a high profile case.  You would think Charbel could be bothered to read the defense petition.  The judge clearly had.  He hammered her on 418.  Then he quietly paused and let her look it up and read it.  Gosh your honor, I guess it could be pertinent to this case.

She also kept using the plural of witnesses have said Beasley was clearly backing away when he was shot, when in fact it is one witness. [15 Mb, PDF, Phoenix police report - witnesses]  Many others say something quite the opposite, that Beasley had entered the vehicle with his hands before being spun around when shot.

She also said blood alcohol levels (0.19 extreme DUI) in Mr. Beasley were not mentioned to the grand jury because they were not yet available at that time.

I am guessing from the questioning the judge had already made up his mind based upon the defense's petition and was trying to give Ms. Charbel every opportunity to convince him not to remand the case back to the grand jury.

In the end Mr. Cantor offered a few more facts of the case for the record.

The judge then denied Mr. Stuart's request to dismiss the charges.

The judge however, granted Mr. Stuart's request to remand back to the grand jury not due to excluding material facts, but due to a failure to present 418 as a possible defense.

So the grand jury will again consider the homicide charges (and presumably the drive by shooting charges).  The defense will be able to make a series of requests of facts and issues they would like the prosecutor to present before the grand jury.  She is not obligated to do so, but each point she decides not to present makes further appeal possible.  My understanding is that Mr. Stuart would like to testify before the grand jury.  But the grand jury is under no obligation to hear him.  He would be subject to complete questioning under oath without his lawyer present (I believe) should he so testify.

Minute order for new court hearing date for false filing charges.  Trial management conference is set for Aug. 18.  While the trial is set for Aug. 25, the judge, prosecutor and defense made it clear they are not able to do that date, and the judge made is clear the actual trial date will be worked out at the management session.
Minute order in the homicide case.  Confirms the remand back to Grand Jury.