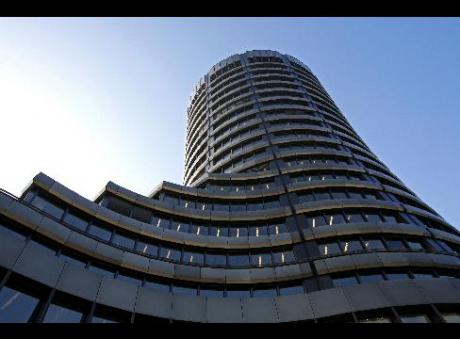 The Bank for International Settlements stands in Basel, Switzerland

Understanding Just How Screwed We All Are

(Rescheduled to run again on the Front Page of FreedomsPhoenix 09-18-2008. The original publication date was 07-23-2008. But I think that this 'prediction' will help people understand more about what is coming,... it's just starting)

Stuck in the Baltimore/Washington airport for 8 hours due to a canceled flight, I had time to listen to an Interview posted on FreedomsPhoenix by Editor Mike Dugger (over the next 24 hours I would listen to the program 3 times). This started us down a path of news coverage that exposed a whole new level of understanding about just how much the planet has been plundered by those,… that can.

Central bankers devised a way of taking physical possession of all of the stocks in every Initial Public Offering (as far as I can tell it seems like _ALL_). This allows for selected entities (broker friends etc.) to use the stocks as "collateral" in such a way that they are counterfeited into many many many many times their value into 'the market'. The term most associated with this practice is "Naked Short Selling".

Sooner or later someone is going to want to see the actual stock that they purchased or whatever is being used as collateral. Well, the 'settling of accounts' has been going on in Europe unknown to the general public in America for many months in an attempt to lessen the damage to Europe's Economy.

The stories below include press releases by MARKIT and the DTCC announcing their combined efforts to make an accurate accounting of all of the trades in the world so that they can be balanced with what is actually available. What was interesting to me was how cryptic the stories were about who/what MARKIT and DTCC was. In none of the articles did they even provide the full name of the DTCC (so I took a look and did some research after a friend told me about their nickname that he read about in 1999. CEDE (as in turning over something to another) comes from: "Depository Trust Company (DTC)

A central securities certificate depository (also known as "CEDE" by virtue of its nominee name, CEDE & Co.) It seems that the holders of the actual stocks have a sense of humor,... kind'a like the Total Information Awareness logo designers (the Pyramid/Earth logo below a few paragraphs down is real. We thought it was joke too back in 2002/03 when this was rolled out, but it was real. After a lot of criticism it was changed)

DTCC is a member of the Federal Reserve System

(they are the "holders" of the actual stocks as far as I can tell). Now we have "The BANK" (the Central Bankers we have been warned often about by those tracking such things), The Bank of International Settlements has just announced their plan to "audit" the Federal Reserve (something that even the US Government can't do).

(Speculation: Oh,... and if The Bank of Settlements has some auditing 'authority' over the Federal Reserve, and Public companies have their stock in the Deposit Trust that is part of the Federal Reserve,... then what happens to those stocks should the Bank of International Settlements decide that the Federal Reserve is insolvent and they should be 'taken over'? This could be the structure for the consolidation of most of the wealth of the planet into the hands of a select class that the conspirists have been screaming about for decades)

I am of the opinion that we have all been the victims of the largest robbery in Human history. Computer technology allowed for the creation of electronic counterfeiting that allowed for the nearly unlimited pillaging of every form of financial instrument used in America and in much of the world. Pensions, Retirement funds, 401Ks, Money Market Funds (Government or Municipal) and the relatively new financial instrument called Derivatives,... and it's all gone. It's not an "if" thing,… it is an "already happened" thing.

Now the Banking system will do its best to "control" the news, and who gets the blame, by leading the investigation of the crime that they were very much involved in and profited from.

Things are going to get much worse than I ever feared.

There is enough recent news below and some background to help us all understand much more about what happened and what is to come.

(Comment on this article by: hemingway811
Entered on: 2008-07-24 09:29:49
I just wanted to post a link to deepcapture as it is directly related to counterfeiting securities. This site was founded by Patrick Byrne, CEO of Overstock.com, who has been fighting against counterfeiting and other abuses in our markets. This site contains much researched information you will not find anywhere else.

I can't find the new logo right now but I've seen it on the net before. It is a stylized TIA with the "A" in the shape of a pyramid with a hoop through the "A" to look like there is something 'in orbit'

Derivatives are a much larger part of the planet's finances than is understood by the general public (and sure as heck not by the media). The unraveling of the economy is just starting to trigger the collapse of the derivative market. This chart will help make the point.

While it may look superficially similar to the recent implosions of such investment giants as Fannie Mae, Freddie Mac and Lehman, the takeover and bailout of AIG is quite different, and means that the market is entering the next and even more dangerous phase.  What is driving the fall of AIG ??" and potential government losses that may far, far exceed the $85 billion bailout announced late on September 16th - is not mortgages or real estate ( directly), but fears that AIG's huge, global credit-default swap positions will unravel.  The $62 trillion dollar credit derivatives market is 50 times the size of the subprime mortgage derivatives market, and is indeed larger than the entire global economy.

Unfortunately, few people understand credit derivatives, or the full risks to the United States and global markets and economies.  In this article, I will take a Credit Derivatives Primer that I published in the spring of 2008 - which anticipated this exa ct type of event - and update it for the current situation.  Through reading this article, you should be able to greatly increase your knowledge of what credit derivatives are, and why they are a far greater danger than subprime mortgages.  We will end with introducing some concepts about how individuals can protect themselves and even profit from these unprecedented market conditions ??" something you won't find in recent financial history or conventional investments. 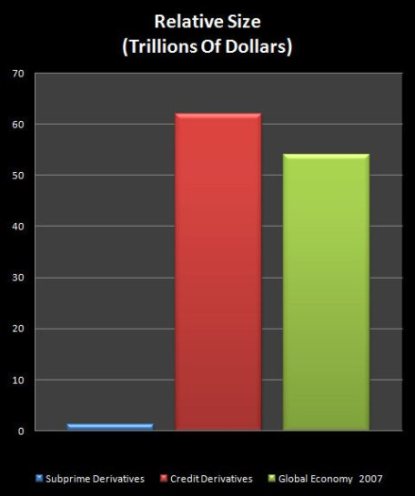 News Link  • Economy
The Greatest Crime in History (Publisher: Audio - This you need to know)
06-13-2008  •  Finacial Sense Newshour
(Audio) Mr. Bud Burrell of Scottsdale, Arizona, who has worked in high finance for over 35 years, lays bares the truth of how Americans have had their wealth stolen from them. Naked shorts, counterfeit stocks, and other means have cost Americans...  Read Full Story

News Link  •  Economy
8,500 Banks may soon die
7-21-2008  •  Daily Kos
Want to know what happens next? It's ape ass ugly and it's going to happen to you, so don't say I didn't warn you. Let's tackle the topic at hand: The Ginormous Banking Enema of 2008
Make a Comment  •  Send Letter to Editor
Reported by Powell Gammill

News Link  •  Economy
Eurex Will Offer Central Clearing Service for OTC Derivatives
07-22-2008  •  www.securitiesindustry.com
Designed to address industry concerns about systemic risk due to backlogs of transaction confirmations in the credit derivatives arena. (this means that the real value of $100's of Trillions in derivatives will be settled, stay tuned)
Make a Comment  •  Send Letter to Editor
Reported by Ernest Hancock

The Depository Trust Company (DTC) is a member of the U.S. Federal Reserve System, a limited-purpose trust company under New York State banking law and a registered clearing agency with the Securities and Exchange Commission. The depository brings efficiency to the securities industry by retaining custody of some 2 million securities issues, effectively "dematerializing" most of them so that they exist only as electronic files rather than as countless pieces of paper. The depository also provides the services necessary for the maintenance of the securities it has in custody.

DTCC's Board is made up of 18 directors. Fourteen are from participants, including international broker/dealers, correspondent and clearing banks, mutual fund companies and investment banks. Two directors are designated by DTCC's preferred shareholders: NASD and the New York Stock Exchange. The remaining two are the chairman and the president and chief executive officer of DTCC itself.

DTCC operates its clearing, settlement, distribution and information-based businesses through several operating subsidiaries. Each serves a specific segment and risk profile within the securities industry.

A central securities certificate depository (also known as "CEDE" by virtue of its nominee name, CEDE & Co.) through which members effect security deliveries among each other via computerized bookkeeping entries, thereby reducing the physical movement of stock certificates. "

"Depository trust company - a central securities certificate depository.
Members of the depository deliver securities between each other via computerized bookkeeping entries.
This reduces the physical movement of all the stock Certificates."

Depository Trust Company (DTC): A central securities certificate repository that is a member of the Federal Reserve System and is industry-owned. The New York Stock Exchange is the majority owner. DTC members deliver securities to each other via computerized debit and credit entries. This reduces the need to actually move paper certificates.

System and the Depository Trust and Clearing Corporation

The Federal Reserve System ("FRS") and The Depository Trust Company ("DTC") are pleased to announce that a new automated interface has been established between the organizations that will significantly improve the process of pledging and withdrawing securities to and from various collateral accounts maintained by the FRS and the U.S. Treasury. Effective immediately, DTC-eligible securities pledged to the FRS or the U.S. Treasury will be processed via this automated interface.

Assessment of Compliance with the

HERE IS SOME MORE INFORMATION ADDED TO HELP UNDERSTAND THE PROCESS...

2. How The Banks Bought Bitcoin | The Lightning Network

Treat this video as a menu to start at. As i add videos i will link the relevant ones. Upcoming videos on Bitcoins censorship by r/theymos, Blockstreams connections to the banks, How Blockstream took over Bitcoins development, as well as videos on Asicboost, Jihan Wu, Roger Ver and a variety of other topics.

Anybody who doesn't realize how very screwed we are, should go back to church and continue praying to their invisible friend for a miracle to happen.  And right after that, they should have another Prozac or two and a couple six-packs of beer.

I highly recommend listening to this very instructional talk show on a subject I never knew anything about.

Heck, if the US government uses tax payer dollars (what other kind do they have?) to bail out two government lending companies who made a pile of unwise lending (of taxpayer money) -- okay, they actually just put some numbers on a loan app and "lended" it effectively printing up money without there ever actually being money -- .in which they end up with the deeds on a bunch of repoed houses it will be the greatest land theft since we stole all that land from the Indians or the Mexicans.