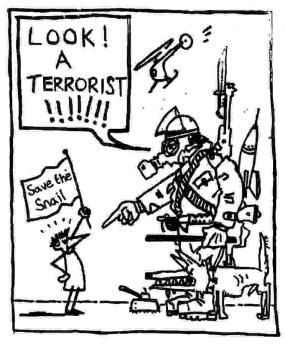 There is not a whole lot to report on updating the Jason Shelton arrest story.

KTAR asked about Shelton's case at the Scottsdale PD press conference on the Scottsdale Police Officer who gunned his Police Dog down -- Accidental discharge?  At any rate, the SPD talking head did not want to comment.  Well, it let the SPD know the press was paying attention to other things besides the deep and sincere regret of a dog killer.  They were watching the possible harassment of protesters opposing the cult of the omnipotent state.  [There is an audio recording I will try to get my hands on of the exchange to post.]

This case will be discussed on the Barry Hess show on 1480AM here in Phoenix, Sunday at 10 A.M. (MST).  Listen live, call in.  This story has legs.

Shelton's foot is still quite sore.  He has left Scottsdale for a few days for Labor Day vacation R&R at a friend's place elsewhere in the county where he is finalizing the raw footage of the tape he made the night of his arrest.  Neighbors have reported the Scottsdale police were pounding on Shelton's door this morning.  Interesting.  One might think they would lay low rather than give the obviously forthcoming lawsuit more juice.  Shelton will be meeting his criminal defense attorney Tuesday.  We will let you know when his hearings start for those who would like to attend.

I am sure CameraFraud wishes to thank its new sponsor, the Scottsdale PD, for arranging all the recent free publicity.

5 Comments in Response to Update on Shelton

I for the life of me don't understand why certain cops mess with people that actually know their rights and understand the constitution.

You know you keep poking at a rattle snake enuff you will get bit. Maybe they should stick to poking the milk snakes and leave the rattlers alone! It's much more cost effective and it keeps embarassments like this out of the media.

Well,...actually the cops are not required to read you your rights until after you are brought in from the field. Upon being processed at the station,...THEN you MUST be Mirandized.

i cant wait to see this video!

ill bet that is why SPD was banging on his door.
they dont want this video getting out.
especially since it shows they never read him his rights LOL

I am rather disappointed in the lack of donations from those who really deep down get offended by all this police surveillance. Here a guy pays the price for you, doing something you would rather no risk in opposing the omnipotent state, and you cannot part with ten bucks. We die separate or we die together. Of course I vote we not die at all. What was it George C. Scott said as Patton?

KTAR 620 am News Talk Radio has been running hourly news updates (very cool). The New Times will be doing a story ( no matter what angle they take, the ball keeps rolling :)

Shelton was advised to 'get out of Dodge' until he meets with Marc Victor (attorney) early next week. The press know Marc and have already called him to confirm that he will be representing Shelton (they know what hat means :)

Shelton's mother lives here in the valley but he is from Kansas City and has been traveling across the country video taping the r3VOLution. I have met Shelton in California, Nevada and New Hampshire at many of the major events. He knows how important and central the Camera/Video surveillance issue is to a 'free America' and has decided to spend some time covering the issue hee in Arizona by following the efforts of CameraFraud.com.

Shelton chose well,... and the world is watching.