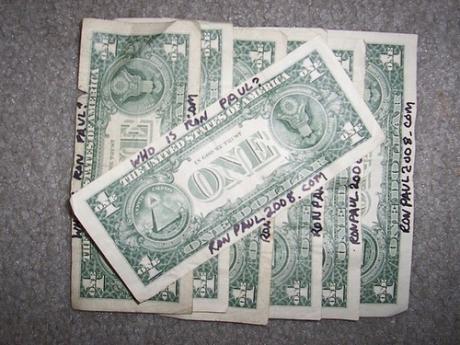 Spreading the Word
by Ron Paul

Many who agree with me on a lot of other issues, do not understand my enthusiasm for gold and sound money or why I spend so much time studying and talking about monetary policy.  It's true that I talk about money differently than most, but the fact is sound money offers many benefits.  For example – peace.

Can sound money really bring about peace?  Actually, it plays a big part in peaceful international relationships.  Money based on commodities, rather than paper, is not subject to government manipulation, and is a key component to free and honest trade.  History shows that if countries engage in trade with each other, their governments tend to find ways to get along for the same reason you do not kill your customers at your place of business, even if they occasionally annoy you.  If someone outright cheats you, however, you may engage in “war” by taking them to court, for example, and the relationship will sour.  Governments and central banks with unfettered power to manipulate currency also have the ability to cheat their creditors.  One way they do this is to simply create enough currency to pay off debts.  This devalues the currency and “cheats” the recipient out of what they are owed.  It would not be fair if you watered down your product the way our government waters down its currency, so it is not hard to understand, in these simplified terms, why loose monetary policy contributes so much to ill will and war around the world.

Sound money, on the other hand, simply is what it is.  Removing governmental power to manipulate money, removes the temptation for government to spend, print and cheat.  Sound money ensures that our government’s spending priorities would be brought into sharp focus and reduced to only what we can afford.

Sound money also limits the ability to wage wars of aggression.  Imagine how much more careful Washington would have to be about starting a war if they did not have this financial sleight of hand at their disposal!  Fiat currency allows government do expensive things they should not be doing while paying the bills with cheap money.  The Federal Reserve has lately been auctioning off large amounts of treasury bills as a way to finance the wars in Iraq and Afghanistan, and our crushing entitlement burden.  The resulting devaluation of the dollar is quickly eroding our image as a good trading partner in the world.  As a consequence, there is therefore more talk of economic isolation and war.

This vicious cycle of spending, fighting and inflating is not what Americans want.  It is what the government wants, and it has had to deceive the citizens into allowing and supporting it.  Sound money curbs the government’s ability to engage in these shenanigans and reduces the wars we fight to only truly defensive ones, for which Americans are more than willing to stand and fight.  So in these ways, sound money is very conducive to peace.
source