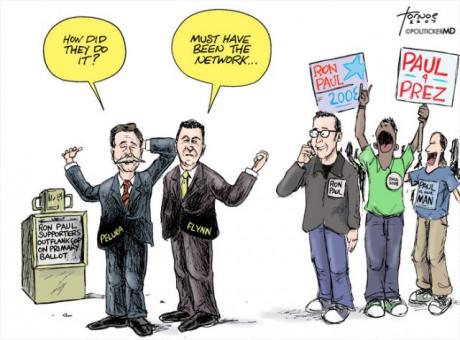 by Ron Paul
Last week I discussed how sound money contributes to peaceful relationships around the world.  It is not gold, in and of itself that excites me, but the many benefits of sound money.  Another benefit is financial security.

Can sound money give you financial security?  There is something very comforting in knowing that what you earn today will retain its purchasing power in the years to come.  Indeed, the same silver dime that bought a loaf of bread in the 1960's can still buy a loaf of bread with its precious metal content – which is worth about $1.00 today.  An ounce of gold has always been about evenly exchangeable for a finely tailored men's suit, which these days is roughly $800.  And in these days of fluctuating gas prices, when priced in gold, oil has been stable.  Meanwhile, since the creation of the Federal Reserve, the fiat dollar has lost 94% of its purchasing power.  The erosion of purchasing power rapidly accelerated when it was completely uncoupled from gold in 1971.  This sort of fluctuation in the medium of exchange creates a lot of uncertainty in the marketplace and necessitates that you either take extraordinary defensive maneuvers, or face financial ruin.  Trusting in government for financial security in retirement is not a safe option.  Indeed, a recent study by the Consumer Bankruptcy Project shows that bankruptcies among those 75 and older has more than quadrupled since 1991.  This represents wealth and savings that have been eroded by inflation, and trust in entitlement promises that were more fantasy than reality.  Even with the pittance that social security pays to seniors, it is bankrupt and bringing the economy to its knees.  It is no wonder that many in the younger generations want no part of it, and they should not be forced into a failed system.

On the other hand, holding physical gold can defend against aggressive government monetary policies that threaten to inflate away the value of your life savings.  During the hyperinflation in post WWI Germany, what used to be a comfortable nest egg was suddenly the value of a postage stamp.  If one held just a portion of their savings in precious metals, the crisis was greatly softened.   Gold will never be worth nothing, even if the exact price fluctuates.  There is a famous photograph, however, of a German woman during this time period burning piles of tightly bound banknotes to keep warm.

Imagine if the money you earned had honest, stable value, or even appreciated like an investment!  No such special measures, like converting dollars to gold, would be required to ensure that your savings would sustain you in your golden years.  That is the way it could be and is supposed to be.  However, the government's thirst for power will not be easily, or cheaply, quenched.  Fiat currency is one tool governments have to extract wealth quietly from the working class.  It is time for the people to wake up to this ruse and look to the Constitution to restore sound currency.