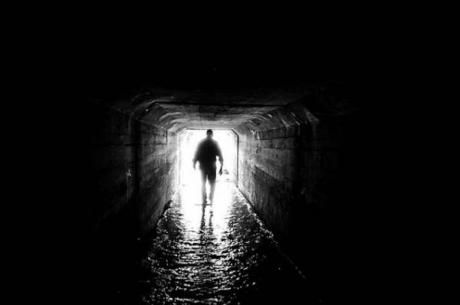 Finally, some light at the end of the tunnel
[I have added an update and may add a second update if anyone has any magazine or other information, or corrections.]
John Stuart's murder trial update:

Pretrial conference today in Judge McMurdie's courtroom.  Besides the judge,  representing the state was  Susie Charbel, Deputy County Attorney, who is also trying Stuart's false paperwork case -- despite being a witness in that case and for the defense, criminal defense attorney Cari McConeghy Harris.

This was a procedural hearing so no new news.

The motion to dismiss was extended for the state to respond without the objection of the defense to Sept. 30.

Oct. 10 was set as the date to reply to evidence under consideration.

Oct. 17 set for oral arguments (these should be interesting) in the murder trial.

Under Stuart's indigent status, the appointment of an investigator for the defense was granted.

Motion for release (bail) was deferred pending his upcoming hearing on the fraudulent submission of paperwork charges which do seem to be lacking in substance.  This motion will be ruled on after Oct. 31, which is the last day to modify the motion.

The BIG News:  Stuart continues to press for a quick trial, and the prosecutor said she could not do a November trial so the judge and both sides agreed to a December 1st trial on homicide (2nd degree) starting at 9:30 a.m. and scheduled to last for four to eight days.  This is it.  Stuart has fully declared he expects to go to trial and will not plea bargain.

The other news which did not come out at the trial was the prosecutor failed to inform the grand jury about 13-419, which is a adjunct to a 418 defense. [note the bottom for all of those hoping to defend yourself against shooting up a  no-knock SWAT team serving a criminal speeding warrant for arrest three in the morning --  the King's Men cannot be defended against.
------------------------------------------
UPDATE:
John really needs others to write to him.  He has been there for five months, and so far only received mail from Cindy, and a very few others.  He needs all of our help to get through this.
Unfortunately, due to Sheriff Arpaio's inhumane conditions you can only send him a post card (PDF) that has a metered stamp.  No stamps are allowed and no letters are allowed.  I buy pre-stamped post cards at the post office.  The stamps are officially copied onto the postcard itself.  This is the easiest way.  Otherwise you can take your post card to the post office and ask for a metered post mark.  Do not let them stamp a white sticky and adhere it to your card as I have seen happen.  One other option is to use obviously your own postal meter if you have one, or use online postal software to make you own stamps.

The other reason is to let the state know John has people interested in his well being.  You can boost John's morale by sending a brief message that bumps the state and those who run the jail at the same time. It lets them know you are watching and are willing to be active in his defense. Tell him what you have done this week, what is going on. -- Powell

He has requested magazine subscriptions.  It appears as long as they are coming from a reputable third party (i.e., the publisher/ distributor) there is not strict policy.  I doubt Playboy or Guns & Ammo will pass, though I seem to recall an ACLU case, still, I will see if I can get an idea on what he likes (cars, computers, libertarian, audiovideo????).

I can tell you he is lonely, manipulative, desperate, his spirit depressed, self absorbed and feeling abandoned.  Pretty typical of anyone trapped in a cage with little to do but focus on his own survival.  He has been in there now for five months!  I'm told by my felon friends by now he has lost a lot of his initial fear and knows he can survive, but I cannot imagine what a terrible time he is having.  I can tell you he is penniless, in debt, finally facing trial dates with an unknown, unpredictable future.  Perhaps my friends would have magazine suggestions.

From John: "I could really use donations to buy food. We are only fed twice a day and without extra food I am hungry most of the time. At least one meal a day is inedible. Thanks for actually giving a damn!"

For donations: Postal money order only, nothing else in envelope, must say "for deposit only" on envelope.

To send him money it must be in the form of a money order payable to: 4th Ave Jail

There should be nothing else in the envelope and it should be addressed as follows:

For Deposit Only
to account of John Stuart
P405881

Yes you can go and visit.

If John can make bail in November, he will need a place to live before his trial in December.  Anyone wishing to volunteer let me know.  Truthfully, a temporary job would be good too, to keep him occupied, and it looks good to the court if anyone knows of one falling for a few weeks in November.

Did this guy get convicted?

I called jail information and the recording said you needed to include more informaiton. Here's what I have

Yes, but what makes people open up the link, murder or self defense?

I think it's a self defense trial not "murder" trial?