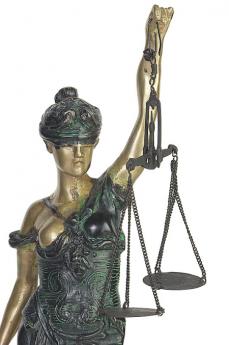 A few days ago, John Stuart, after becoming impoverished, malnourished and perhaps disoriented after spending five months in the self described "Toughest Sheriff in America" Joe Arpaio's detention center due to his bail being permanently revoked because of an additional bogus felony charge [1 count of filing false public records (CR2008-006332)] tacked on by the Maricopa County prosecutors, John Stuart accepted a plea deal yesterday.  He plead guilty to a class II misdemeanor (PDF minute entry 1), Solicitation to Commit Presentment of a False Instrument for Filing, in exchange of an agreed four months prison sentence (PDF minute entry 2) reduced to timed served.  Now that this charge is out of the way, his bail hearing is set for October 1st.

Stuart was forced to accept this deal despite prior good indications twice from the prosecutor to the court that they were going to likely have to drop the charges for lack of evidence.  What was he guilty of?  Paying Rabbi Shawn Rice [if web site link not working, try the Google cache (1) (2)], a "lawyer" (but not an Arizona Bar member), $10,000 to advise and prepare legal paperwork to recover bail money which was filed and is the basis of this charge.  So Stuart was following the advice of his lawyer.  This "lawyer" wisely disappeared when Stuart was rearrested and charged with the false public records felony filing.  He certainly exists, but is nowhere to be found.

So why did Stuart hire this guy?  Mr. Stuart was represented by ostensibly one of the finest criminal defense lawyers in the state, and had fronted this lawyer $262,000.  His lawyer without stating a reason [I can only guess it was some of the statements his client, Mr. Stuart, had made or posted or someone else had posted regarding sovereignty, admiralty or maritime law.] dropped Stuart.  At the time, Mr. Stuart was under the belief -- not a hard one to make because I got to witness the uncertainty first hand of what this was going to mean -- that he was without an attorney, close to broke, with little money likely forthcoming and in big need of help.  He turned to a person he had met 6 months before, whom introduced himself as a rabbi and a lawyer for free legal advice.  This "lawyer" assured him for $10,000 he could make these charges go away (close the case) by filing paperwork under maritime law.  He filed paperwork.  How could Stuart be so dumb?  He was broke, just given the boot by his lawyer and turned to someone whom befriended him a few months before seeking some no money legal advice ... that would cost him dear.

In the meantime, Mr. Stuart's former attorney returned $100,000 which Stuart used to hire a new criminal defense attorney.  During a hearing his new attorney was presented these "legal documents pertaining to maritime law" by the judge (Steinle?).  He told the judge he had no idea whom filed them and they were nothing he was pursuing and handed them back to the bailiff.  This constituted the legal filing...and if it sounds like a can of worms it was.  It involved two judges, the county prosecutor's office and a "lawyer" and Stuart's current attorney.  And a lot of questions over whom filed what for whom?  And how did the papers get brought to the prosecutor's office notice so that felony charges were filed?

Mr. Stuart had to hire a separate attorney in this new false instrument case, Jeremy Geigle, who has just  surprisingly quit without notice or explanation cutting off all contact with the defendant (or his girlfriend, Cindy Cantrell, who is coordinating his defense) two weeks ago, despite good indications he had won leaving Stuart to a potential trial defended by a overworked public defender's office.  Geigle did represent Mr. Stuart at this last hearing but filed his severance paperwork with the judge.
Mr. Stuart was under pressure to accept this agreement.
So why did Jeremy Geigle quit?  I can only speculate because he is keeping mum.  Mr. Geigle impressed me as an upstanding Mormon attorney, a young Jimmy Stewart type, idealistically believing in the law.  He correctly notified the state of his intention to interview (depose) two judges (Ryan and Steinle) and the county attorney Andrew Thomas in this case.  [Geigle had already called prosecutor Charbel to the stand as a witness to the exchange of paperwork by Mr. Stuart's current defense attorney in the murder trial and the bailiff/ judge.] And oh, were there some juicy questions that have been raised as to whom introduced the paperwork, which judge's signed off and accepted it, then retroactively tried to refuse it, how the paperwork got from the court to the prosecutor's office, whom made the decision to file the additional charge to revoke Mr. Stuart's bail (costing him $23,000 after being out less than a week), did the detective in charge perjure himself on the stand????  But I speculate here that calls were made from the prosecutor's office to the senior members of Mr. Geigle's firm.  Mr. Geigle was informed that 'lawyers do not depose sitting judges or prosecutors in this state.'  [This is pretty much how things operate throughout the USA, outside of a Hollywood script.] Speculation now over: And to terminate the case the state bar was consulted and came back with 'boot your client, give him no reason, case closed.'

A. A person, other than a peace officer acting in his official capacity within the scope of his authority and in the line of duty, commits solicitation if, with the intent to promote or facilitate the commission of a felony or misdemeanor, such person commands, encourages, requests or solicits another person to engage in specific conduct which would constitute the felony or misdemeanor or which would establish the other's complicity in its commission.

B. Solicitation is a:

1. Class 3 felony if the offense solicited is a class 1 felony.

2. Class 4 felony if the offense solicited is a class 2 felony.

3. Class 5 felony if the offense solicited is a class 3 felony.

4. Class 6 felony if the offense solicited is a class 4 felony.

5. Class 1 misdemeanor if the offense solicited is a class 5 felony.

6. Class 2 misdemeanor if the offense solicited is a class 6 felony.

A person who acknowledges, certifies, notarizes, procures or offers to be filed, registered or recorded in a public office in this state an instrument he knows to be false or forged, which, if genuine, could be filed, registered or recorded under any law of this state or the United States, or in compliance with established procedure is guilty of a class 6 felony. As used in this section "instrument" includes a written instrument as defined in section 13-2001.

In theory, this conviction should not effect any aspect of Mr. Stuart's self defense trial, other than clearing this distraction out of the way.

He will have a bail hearing Oct. 1st.  But seeing he is indigent, I see little likelihood he will make any bail, or be released on his own recognizance. But if you want to help, showing up at his bail hearing on Oct. 1st, can reinforce to the court that Stuart has many friends in the area.  Many polite and respectful friends.  That he has roots here.

We can finally get to the real trial.

-----------------------------
update:
John Stuart has a bail hearing on October 1st at 8:30 Judge McMurdie room 413 East court building of Superior court. If any of you can make it to the bail hearing we really appreciate it. This case has bankrupted John and he has no way to post his current $182,000 bail. We are hoping he can be released on his own recognizance's pending the trial December 1st. He needs a lot of support at the hearing so he has a chance of the reduction in bail. Thanks in advance to all of you that can be there.

If anyone would like to write to him, his address is: (He can only receive metered postcards with no stamps)


Lets have a decent turnout so the Judge will see that he has people who care about him!