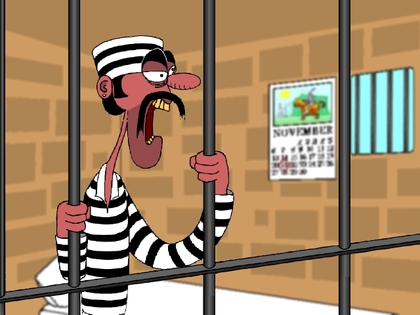 John Stuart's remand hearing was well attended by John's supporters.  Mrs. Beasley, whose husband was killed, was there with a friend and several supporters.

Two events occurred at the hearing.  A hearing to confirm conditions for bail have been met, and a motion to remand the case once again to a grand jury.

A "third party bond" was arranged a week ago by Mr. O. Joseph Chornenky, who happens to be a licensed attorney with the AZ Bar Association.  This was accomplished by finding someone willing to put their Colorado home up as collateral to cover the $184,000 bail [an additional $10,000 personal loan was made by another person to cover a shortcoming].  To do this -- and anyone can (I will see if Cindy will send me the information which everyone in AZ should know) -- you have to get all the checks crossed off a list.  It has been done in the past by Mr. Chornenky at the Superior Court on 19 prior occasions.  It is rarely done, most defense lawyers do not know about it, and this Judge had apparently never experienced it before.  Because of the manner in which it is done, a judge must approve of it.

Ms. Charbel had emailed her objections to the judge yesterday (but not to Mr. Chornenky telling the judge she had not because he was not Mr. Stuart's attorney).  Mr. Chornenky said he had not seen the email.  The judge read a list of objections from the email raised by the state:  No notice of appearance, violation of count one motion of appearance, lawyer (Mr. Chornenky) is not on record, this may be a violation, improperly violating policies of this court. In addition, Mr. Chornenky is a potential witness in this case [Interesting: Was he the lawyer Stuart was going to meet to surrender to police when he was pulled over and arrested?].

Mr. Chornenky countered that he was not acting as Mr. Stuart's attorney, but merely a person filing paperwork meeting the requirements of the state to arrange bail for Mr. Stuart's release.  That absolutely anybody was free to prepare and file such paperwork.  Bottom line: The judge agreed with him.

The one concern the judge had was being named in person on the paperwork in the matter of assurity (?).  Mr. Chornenky used this opportunity to state he had filed many similar claims to using property to successfully meet bail for people in the past (20 times) before in the Superior Court of Arizona, and this was proper procedure as listed by the state and that listing the judge by name was done so as to confer on him the sole power to cancel the bond.

The prosecutor requested a week to respond (I thought she had by email).  The judge gave her until Wednesday.  He gave Mr. Chornenky until Friday next week to respond to her response.  And he said he would rule a week from this Monday.

It looks to me that if everything is up and up and all the boxes have been checked there is not a thing either the prosecutor or the judge can legally do to prevent Mr. Stuart from being granted bail that day.  It is time for these unconscionable delays to end.  Unfortunately, my understanding is Andrew Thomas' County Attorney standard operating practice is to delay release 24 hours after it is granted.  And the courts go along with it.  Keep in mind from an earlier writing of mine that YOU are entitled under the Arizona Constitution to reasonable bail.

The first remand hearing was interesting from the standpoint that information gets released that otherwise would remain for the trial.

The transcripts of that grand jury (PDF) hearing were released and the judge's instructions appear to have been ignored, the police officer who testified last time literally lies under oath to the jury this time (and last time too) and the prosecutor steers the jury away from questions they lawfully demand to get that reindictment.  Amazing to anyone who doesn't know that they will get away with it.  This ain't Hollywood.  It is the real world and how you can expect to be treated if you get arrested.

The autopsy report (PDF) is brought up in the grand jury testimony so I will finally include it here.

This hearing was to present oral arguments for why the case should be submitted a third time to a grand jury due to prosecutoral misconduct.

Reasons presented by the defense for another "remand" hearing (PDF of motion from defense.  Please keep in mind the lawyers cannot make misstatements in this document to a judge.)

In court interestingly oral arguments on the motion did not ensue.  Instead, Defense Attorney Cari McConeghy-Harris raised two objections to the prosecutor.  She objected to an response the prosecutor had sent to the judge (and to her) the previous morning alleging that she was "blackmailing the prosecutor" with this remand by stating Mr. Stuart had every right to request a remand.  Mr. Stuart was the one incarcerated, he was entitled to a speedy trial and had rights in remand.  The arraignment was now over three months old.

Her second objection was the prosecutor stating in the email as a matter of fact that numerous scheduled interviews by the defense of witnesses were canceled.  Cari McConeghy-Harris said this "was a lie."  That she had been involved in every defense request to interview a witness (eight total) and only one had refused.

Ms. McConeghy-Harris asked that Keith Plain (Charbel's paralegal) could shed light on interfering with witness interviews if his testimony was sought.  That the lead defense attorney at her firm, David Cantor tried to reschedule an interview and was "horrified at the response" from this witness who stated the prosecution had told them they do not need to be interviewed.  That there was an open violation of Charbel's ethical duty at this point if the court would investigate.

Prosecutor Susie Charbel countered that the canceled interviews did not refer to the witnesses.  But either I missed it or she didn't say whom it referred to.  Tat her office had never told witnesses they shouldn't cooperate with defense, but rather they had the right to have a representative from the county attorney's office present at any interview by the defense.

The judge seemed to pretty much ignore the whole exchange and move the process along.

The defense requested the case be (re-)designated as a "complex case," due to the number of witnesses that still need to be interviewed by the defense (estimated at 40).  The State had no objections and it was so ordered.

[NOTE: If a speedy trial is sought by the defendant (and it is in this case), the State has 120 days from the date of arraignment.  In this case when John Stuart's case was resubmitted to the grand jury and they handed down an indictment and he was rearraigned a day or so later the clock reset and the countdown restarted.  April 26 is the last day now.]

February 19 -- Jury questionnaires authorized (questions to be agreed upon prior to TMC),  jury prescreen scheduled

February 20 -- Trial Management Conference (TMC; argue motions and other matters)  This will be a lengthy hearing starting at 10:30 a.m. and scheduled for 90 minutes long.

There was a Sept. 8th filing of a motion to dismiss by the defense.  Sept. 12 hearing:  Resulted in the judge entering these commands in a minute entry:

The judge ignored his own deadline, the court system's deadline (that you can bet your life on the defense would have been held to) and gave the state two weeks to respond.  [This is the first time I have been rather disappointed in the judge --- in this case for a complete lack of respect for his own court shown in allowing the prosecutor to do what she wishes without consequence.  It is his court.]

As to bail hearing or remand hearing...as far as I can see they really didn't take place.  Both were essentially delayed.  I think a week from Monday we will have a bail (bond) decision.

If anyone knows of a place where John can stay when he gets out or of a job -- even a spot or temp job -- please contact me or Cindy Cantrell.  John has been rendered penniless now, without his fiancée, without a home or source of income and he will need to get started on getting his life back together soon.  If anyone has any ideas let us know.  Donations are still sought right now to keep John fed in jail, and your postcards addressed to John at the prison still bring hope to a dejected man.


Synopsis: A dozen links to this case listed in the order of posting from May to present.  The Beginning

A prosecutor admits a problem