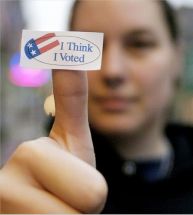 I've been a registered voter in Maricopa County, at the same address, with the same name, since October 2004.  I've voted in a few elections, and in February 2008, I voted in one of the primaries.  (By the way, if someone wants to explain to me why state governments are handling the primary elections for what should be private parties, please do.)  I'd never had a problem until recently.  The only thing I did this year was to switch the party for which I was registered so I could vote in the primary, and then I switched it to libertarian after that.

My husband is registered to vote, and he received his sample ballot several days ago.  I did not.  I pulled out my most recent voter identification card and verified that all of the information was correct (see attached image).

I went to the Maricopa county recorder's website to verify my registration.

I entered all of the information correctly, using the voter ID on this card.  I received the following message:

I checked all of the information and tried again.  Then I tried again using my driver's license number.  I got the same message.

Well, I wasn't going to bother going down to the polling location until I figured out whether they considered me registered or not.  I called the phone number above and talked to a woman, whose name I
didn't record, who presumably looked me up in their database by name.
She said there was no record for me.  I said I had been registered before and had voted in several elections, including this year's primary.  She offered no solutions, no apologies.  She said she would transfer me to a "specialist," whatever that is.

I waited on hold for a while longer for this specialist.  I then talked to this other woman, whose name I also didn't record.  First she looked up the voter ID I read her off the card.  Then, she asked, "Who is Heather Dehaven?" in a rather rude way.  I said "I don't know," then went on to explain that it was not a name I had ever used and that something must be wrong.

After talking with her for a few more minutes, it became apparent that the vote ID on my card is now associated with a different person's information.  The specialist said that it was as if my information was mixed up with hers.  She asked me for my date of birth, address, and name a number of times.  Obviously the address is different, or I might have gotten a sample ballot at this address with the name Heather Dehaven on it.

This specialist proved to be as unhelpful as the first person I talked to.  I asked her what my options were.  The only answer I got was for her to take down my phone number, but she never explained what would happen - an investigation?  Who knows?  I asked her if I could vote today.  She said I could go down to the polling location and fill out a provisional ballot, but that once they determined I was not registered, the ballot would not be counted.  Gee, thanks!  She offered no way for me to re-register today, or after the fact, but I am going to try that.  And, of course, there was no recognition that they potentially messed up (or I'm lying, or delusional, or have the wrong card?).

When I went to the elementary school where voting was taking place, I was not on the list.  The woman who was checking the list actually advised me to "go to another precinct" (???) because they had "split them up."  She didn't say where this location would be.  This, in spite of what it says on the voter ID card I presented.  I told her to give me a provisional ballot.

The lady handling the provisional ballots was much nicer and more optimistic than anyone else I had talked to today, but just as useless as everyone else.  I filled it out, dropped it in the box, and left.

The provisional ballot status inquiry webpage of the recorder's website is saying this right now:

"Provisional Ballot Status information is not yet available for the current election. Please check back after 5pm on 11/11/2008."

As a side note, I find it humorous that though I am not registered to vote, I am eligible for jury duty.  I received a summons a couple of months ago, postponed it once, and recently postponed it again.  I've attached images of the front and back of the card recognizing my second postponement.

Well, that's the sum of it...please let me know if you need more information.  The only other thing I've done so far is call 866-OUR- VOTE and file a report with them.  I'll get back to the county recorder tomorrow.

6 Comments in Response to I Wanted to Vote but...

Yet another update - I just checked the status of my provisional ballot on the Recorder's website! Oh boy!

YOUR PROVISIONAL BALLOT HAS NOT BEEN COUNTED BECAUSE

YOU WERE NOT ELIGIBLE TO VOTE IN THIS ELECTION.

Gee, thanks, Helen Purcell. After your office assured me my vote would be counted after all. Guess it's time to make another phone call.

Another update. They sent me a new voter ID card, with the same voter ID as before. Not what I expected - I thought they told me on the phone that I was getting a new ID?

I went to http://recorder.maricopa.gov and verified my voter information. This time, it worked, unlike Nov. 4:

"***HEATHER, your registration status is active and you are eligible to vote.***"

"Provisional Ballot Status information is not yet available for the current election. Please check back after 5pm on 11/19/2008."

Maybe their current legal troubles have tied them up.

Hmm, it looks like the Maricopa County Recoder's website changed its date for checking your provisional ballot status.

"Provisional Ballot Status information is not yet available for the current election. Please check back after 5pm on 11/19/2008."

The list of names that is used to call people for jury service is created by combining the County's voter registration list and Arizona Department of Transportation records. Names are randomly selected from that master list by a computer program.

I am certain that your article here on FreedomsPhoenix didn't hurt :)

Update: today I talked to Henry, "the only Henry there," in the recorder's office. At some point he said I had put myself on the permanent early voting list in July - I said no I didn't! From what little he told me, it seems they mashed this other person's permanent early voter list request, with the wrong voter ID, with mine. He said our "signatures looked similar" - why would that matter? Clearly we had different names. This is why I didn't want to be on the permanent early voting list (and now that I read about the outsourcing...confirms my belief that it's a terrible idea, not that voting at the polls is secure).

So, it seems that someone used my ID, probably unintentionally, and wanted to be on the early voting list. This person's first name happened to be Heather. All of the other information was different. You'd think the DOB might have given that away, no matter how "similar" our handwriting was, or what scheme they assumed (maybe that I'd changed name and address).

So Henry assures me that they have transferred all of my information (they still had some record of it) to a new voter ID, and that my provisional ballot will be counted. I'll hold my breath for that.