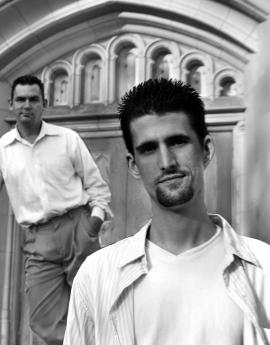 Against a backdrop of Lauren Canario spending 30 days in lockup for failing to stop at a closed security checkpoint, another Free Stater has found a new home in a New Hampshire jail – over a couch on his tenants' lawn.

Ian (Bernard) Freeman is the host of the internationally-syndicated Free Talk Live, broadcast on over 40 stations in the United States (7-10 pm ET, Mon-Sat). In August, Ian received a Notice of Violation from the City of Keene, NH for the couch used by his tenants for bird-watching in their yard.

Ian formally asked the City of Keene to show his obligation to abide by city ordinances. The city answered with a notice to appear.

Rather, the city brought a hearing before judge Edward Burke where Ian formally offered to remove the couch for an opportunity to meet with the complainer.
The city did not reply, but through the code enforcer that was replaced as the complainant, Ian was told the original complainer did not want to meet with him.
Ian offered to remove the couch if the City of Keene would clarify his obligation under their ordinances. The city did not reply.

Today, Ian appeared again before judge Burke; 15 seconds (charitably) later he found himself in handcuffs charged with contempt of court. Whisked away to another courtroom, Ian was charged with two more counts of contempt and sentenced to 90 days in jail, with another 3 days for fighting the notice of violation.

Make no mistake, Ian Bernard used this conflict to show the violence that is part and parcel of government. In that, he has succeeded spectacularly.

We all know that there is no commonly-accepted contract wherein we submit to the rule of other men or the tyranny of the majority. We also know that the humans entrusted with a monopoly of violence by the tyranny of the majority will not hesitate to use that violence against other humans. This case exposes that sham in such a public way, the only government solution is to silence that voice for over three months. Here's the raw video (Simon says?):

Watch the raw video again. Notice how four enforcers are in place prior to the judge's entrance, one moves immediately to arrest Ian, two take positions to repel observers, and two appear out of nowhere. With a game plan in place to remove Ian from the public court to a private tribunal, the question of guilt or innocence is irrelevant.

Here's the gun in the room. Here's your violence. All in one neatly-wrapped package. This is naked man against naked state.

A judge that shows as little self control as this one does shou;ld be removed from the bench as soon as possible. Men like that think they are above courtroon etiquette and can wield incarcreation as therir own little way of getting even for some imagined slight. I didn't see what slight it was as the guy only asked one question before he was arrested.

The remedy is at http://ruleoflawradio.com/

Every state has laws against Official Oppression, and Kidnapping. When the State starts a fight, they loose their shield from prosecution and are no longer protected by Sovreign Immunity.

ALSO - Szandor Blestman has a great editorial on this case:

Excellent video! Couch my ass, Ian was subdued because HE WOULDN'T SIT DOWN WHEN ORDERED TO!

Fascism at it's finest.

The Free State Project has a lot of work to do - just one more reason I don't want to live in New Hampshire (besides the snow LOL).