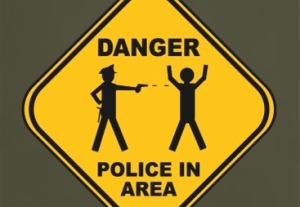 CameraFraud held a one hour protest rally on the 16th street bridge (overpass) that spanned I-10 (202) at 4:30 PM rush hour traffic.  About 15 people showed up.  Plenty of signs.  Right below us on either side of the freeway were photo radar cameras getting both directions of traffic. [Note: Truth is, according to the Department of Public Safety (DPS), these cameras are in test phase and flashing a lot of times when nobody is speeding.]  Either way, traffic is crunched up at this hour and moving slow so they got plenty of time to read as they pass underneath us.  We got a stream of horn honks by passing cars.  A cacophony of pissed off Arizonans who should be calling the Obama Administration and telling them NOT to offer our beloved Governor Napolitano a position in his administration because of her proven track record at using surveillance -- just like the current administration has been tarred with -- to literally loot her constituents.  Does Obama really need the aggravation of a Bush like fiasco in waiting?  Of course it would be nice to be rid of her, but do we have a moral right to sick her on the nation?

We had an initial visit from a DPS car who threatened to call her supervisor.  We never heard back.  But while we were there a DPS motorcycle showed up down on the freeway.  Then a DPS cruiser and a unmarked gray SUV.  Then another cruiser and a couple of other unmarked DPS vehicles [one may have been a white Redflex service vehicle.]

So we spent the better part of 40 minutes dealing with the heavier westbound traffic, until the sun was setting low enough that it made more sense to switch to the other side for the final 20 minutes.  The sun would hit our signs better, and traffic was getting heavier in the eastbound direction.

It was almost 5:30PM, getting ready to pack up.  The photographer/ videographer from TheNewspaper and our own Sheldon were down on the freeway shoulder filming the protest from the car's vantage when they packed up and start to come back up the off ramp.  Sheldon doesn't make it.  A DPS cruiser comes flying up slamming on his brakes and chases Sheldon down.  He gets arrested ... AGAIN ... while filming a lawful protest for Freedom's Phoenix as a properly credentialed videographer.  He in fact identifies himself as such.  Doesn't matter.  This cop has been waiting for an excuse to bust someone and it ticks him that he can't get the protesters on the bridge. [Though he does threaten us with arrest for impeding the flow of traffic for waiving signs on the bridge (which is Phoenix PD jurisdiction) ... like the photo radar cameras aren't causing cars to brake!]

Sheldon was arrested for criminal trespass.

Four DPS vehicles with nothing to do but hope the angry mob doesn't tear them to pieces ... at least that was my impression, that four well armed DPS officers were sweating a crowd of a dozen chanting, "Let him go! Let him go!"  Ah, flashbacks without the smell of tear gas.

Well one of the DPS vehicles stops at the top of the off ramp and he (the arresting officer) gets out.  Blah, blah, blah.  Bottom line he will take Sheldon around the corner and then let him go.  I hand him my business card, state my name and identify myself as the Senior Editor for Freedom's Phoenix and state Sheldon is my videographer filming this protest for Freedom's Phoenix.  Just so we are clear.  So four DPS vehicles pull onto Portland St.  With Sheldon in one of the first two vehicles.  Then as the crowd migrated there the first two take off with Sheldon.   We are left across the street making phone calls to various parties.  Matt calls the DPS to speak to a watch commander.

About half an hour later they show back up and drop Sheldon off on the other side of the parking lot where we are standing.

I am not surprised with the response.  We have three articles that must have embarassed the DPS, and they are just looking for an excuse to crack down on a bunch of demonstrators opposing the Governor's new oppressive program.  Nobody likes to have their new power questioned.  And cops hate a lack of genuflection.

I am really getting sick of Sheldon getting arrested every time he films an event.  I am getting tired of the guy with the camera getting grabbed.  It does make for a easy eventful story though.  But until there is a price to pay, the cops will feel the power to grab a media person whomever, whenever they like without reason to fear.  Can anyone think of a price?  I would love to read an creative and realistic idea.... 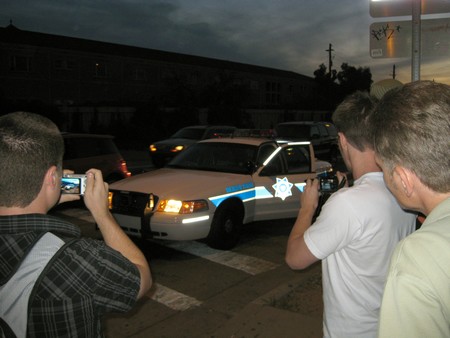 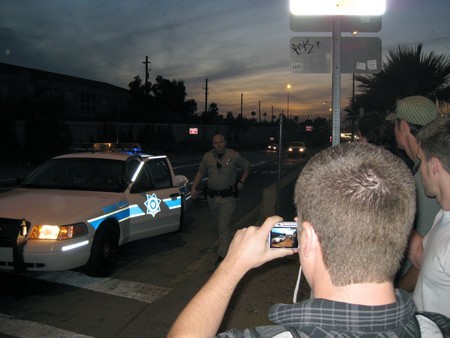 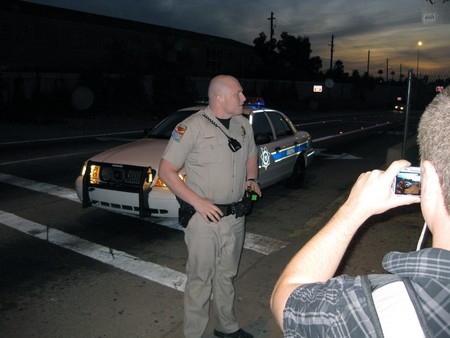 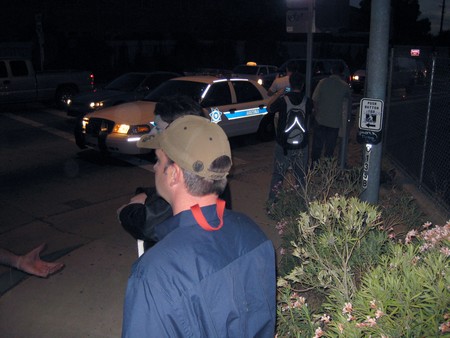 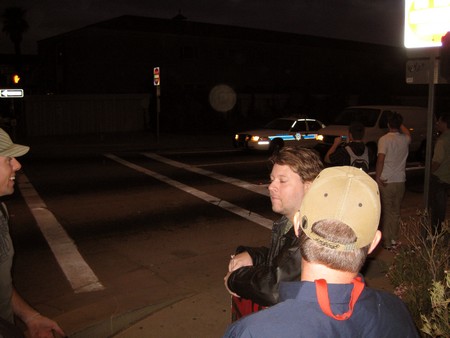 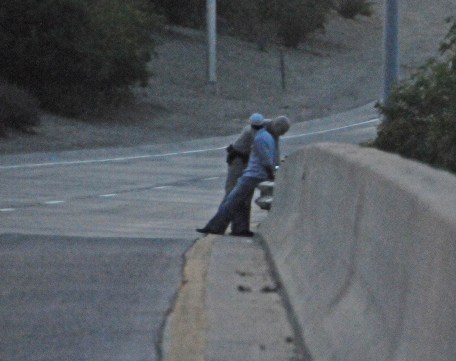 I think I`ll tell his mother on him....but that,most likely, won`t do any good...hell!! she raised him.
I can see his Children now...Yeah Daddy...Go Daddy...we love you Daddy.I`m sure his Kids have been conditioned.
Poor Kids didn`t have a chance.

I apparently did not use the stated link template properly since none of the links came through and left out the link text making 2 sentences less than fully clear. I'm now simply providing a reprint of the sentences where 2 were lost and the link text. (A preview tool would have prevented this.)

Next to last paragraph: It is the practice of using social preferencing, based on rational discrimination, towards individuals that many in society have not yet come to realize is a perfectly valid and most powerful way of influencing [http://selfsip.org/solutions/Social_Preferencing.html] (and by giving reasons, persuading) others towards or away from ideas and/or actions. ...

Powell closed the article with:
"I am really getting sick of Sheldon getting arrested every time he films an event. I am getting tired of the guy with the camera getting grabbed. It does make for a easy eventful story though. But until there is a price to pay, the cops will feel the power to grab a media person whomever, whenever they like without reason to fear. Can anyone think of a price? I would love to read an creative and realistic idea...."

Negative is the solution! In this type situation you have made a good start by photographing and publishing the image of one of the officers involved in this arrest. Now in addition to closeups of him and others, print their names (it's on their badges and they must identify themselves) and the district they are working; if you know their addresses, I'd say use that information too as a means of fully identifying each them. The point here is to let others know which particular law enforcement officers are performing which particular acts of force initiation, or making threats to do so if an individual does not act in a certain manner. Behind each of these enforcers is the government's claim of the monopoly on the use of initiation of force and these individuals are very willing to carry out any order. Therefore, making all the facts of situations widely known is important for social preferencing purposes.

Negative social preferencing is a powerful tool for an individual to make clear to others that s/he does not approve of some action performed by or idea held by another. And when large numbers of individuals stop frequenting a business or organization because of the practices of one or more of its management or owners *and* make it publicly known why it is being done, that most certainly will get the attention of those being preferenced against, and may also influence others to do the same, which will strengthen that attention getting.

Social preferencing is positive when one openly supports another verbally and in action because one approves of some action performed by or idea held by such person (as social value from that person), or because of a material value obtained from that person - ie. buying in a store that one thinks provides good/excellent service. This is done routinely by most people every day, often without much conscious thought about it. In a free market, the most highly used and successful businesses are those that have been the recipients of the most positive social preferencing. Likewise, individuals are also practicing negative social preferencing when they purposely choose not to use certain business establishments for any number of reasons. When done in concert with others who hold the same disparaging view of the management of an establishment, negative social preferencing can be the most powerful of methods for persuading owners/management to change the practices that have been identified as being so highly disliked.

It is the practice of using social preferencing, based on rational discrimination, towards individuals that many in society have not yet come to realize is a perfectly valid and most powerful (and by giving reasons, persuading) others towards or away from ideas and/or actions. Those who choose not to associate with and verbally disagree with those who socially preference against the original parties are practicing social preferencing too. When these actions are done openly and without the use of anonymity it lets everyone know just what everyone else thinks and does - what social preferencing direction (negative or positive) and degree each one is taking on a particular subject and what one's individual reasons are for such choices and actions. This provided information, when it is expanded to all subjects or areas of human interaction, allows each individual to make choices of association (types and degree) based on what will most likely maximize hir lifetime happiness, the purpose of each individual's life whether or not s/he consciously recognizes it.

Unfortunately, when the dictates of government interfere with social preferencing, the ultimate effector of social order, by preventing some interactions and requiring others, the social maturation of the majority of a population is prevented from occurring and effective, complete social preferencing can never be realized - and consequently natural social order is greatly diminished as a result.

First they mock you.
Then they fight you.
Then you win.

Sheldon you just have to run faster buddy! Maybe some early morning jogs and some nice running shoes will help out. But seriously, your efforts, courage and sacrifices are appreciated.
Thank you,
Rick