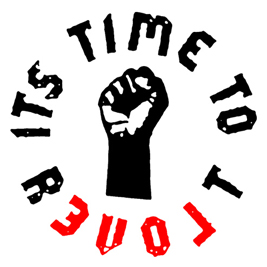 (Publisher: To all that bring up the subject of internal politics, I am quick and clear about my opinion that these structures are there to distract and divert individual actions that would actually have an impact on a freer society. Individual actions that focus on friends, family, neighbors, co-workers, neighbors, in-laws, associates, business partners etc. are a far more effective means of spreading the truth.... IMNSHO. Soooo, examples of just how 'rigged' the "system" is will continue to be published on FreedomsPhoenix for their educational value)

Help spread the word!
To All,
Please find below the YouTube video links of the LD-4 meeting (debacle) which took place on November 17th (shortened and compressed to fit on YouTube).  Combine these videos with Lyle Tuttle's e-mail sent previously under the subject:  HOW NOT TO RUN A MEETING (attached below the YouTube Links) and you will have a good idea of what transpired."    Many of us are concerned that if Chairman Burges does not call a meeting then all of the LD4 PC’s votes are meaningless because Randy Pullen can appoint the officers and state committeemen.  That’s just not right especially when Bob Burges knew he did not have the votes to win and the Nomination Committee’s nominations did.  Why not find a way to shut down, adjourn any meeting / election that is not going your way so the State Chairman can appoint his people.  If this happens it just shows that the Republican Party in Arizona really doesn’t care about its members.  It doesn’t care about their votes.  It doesn’t care about all those people who took the time to become PC’s in their communities to try to make a difference.  It’s just all about power and control.  Keep and put the people in power who have doubled the size of government in the last 8 years, helped vote for the bailout, passed the Patriot Act Twice which takes more rights and liberties away from us than any other act, passed the F.I.S.A bill which allows the government to listen to our phone conversations, look at our e-mails, access our back accounts, etc. and so on and so on and so on.  It’s appalling that so many Republicans are looking the other way as our country becomes a “police state”.  Some care – Judy Burges I commend you for standing up to the “Real ID Act” – thank you.
Please take the time to watch the LD4 meeting.  It’s time to vote a new group of LD4 officers who truly care about the many things and more that I mentioned above; who truly care for less government, are fiscal conservatives and who will up hold the Republican values of old.
We are asking Bob Burges to help all of the 180 PC’s who are going to be robbed of their vote and responsibilities.
Video One
http://www.youtube.com/watch?v=SwCEd-G87QY
Video Two
http://www.youtube.com/watch?v=qHqVS-hVyYc
Thank you for your time,
Tom Platt
Precinct Committeeman LD4
P.S. Lyle Tuttle’s original e-mail below:
Please bear with me on this -- I will show you how 180 Elected PC's in LD-4 have been robbed of their vote.

2.  FACT:  LD-4 Chairman Burges hired a Certified Parliamentarian for $100 per hour to assist in any procedural ruling that might come up during the meeting.

3.  FACT:  There were 151 votes represented at that meeting.  73 in person, 76 by 'accepted' proxy and there were 7 proxies in question at the time of the credentials report.

4.  FACT:  Prior to the credentials report, a question was raised by a PC, stating that she had brought two notarized proxies with her to the meeting from elected PC's who knew they would be out of state on the date of the Nov 17 meeting.  They filled out our usual proxy, and inserted the proper meeting date, had it notarized and gave it to the PC to carry for them.  Because the location of the meeting had changed after the date the proxy was given, the location was wrong.  They denied her proxies on the basis of the wrong location.

5.  FACT:  When the credentials report was given -- after committee deliberation over those proxies, they upheld their original ruling, thus denying the proxies based on 'special rules' for the meeting that had yet to even be voted on -- they were not in force.

6.  FACT:  When the motion for a vote on the credentials report was proffered, confusion reigned, as there was little direction or control by the chairman.  After some confusion, the chairman repeated the motion, stating that we would be voting on the "RULES".....then credentials, and some debate followed.

7.  FACT:  A vote was held, and the motion (which motion??) was defeated handily.

8.  FACT:  More confusion, as it was announced that the motion to pass the rules failed.  (At least the vote outcome was correct)

9.  FACT:  After more confusion, it was determined that the actual vote had been on the motion to accept the credentials report.  (Even the Parliamentarian misstated the motion after the vote, and was corrected.)  He then asked that since we had voted down the credentials report (many voters, myself included, thought we were voting on the rules), what did we want to do?  Confusion, but one Elected PC moved that we vote again as there had been so much confusion over what we were voting for.  The chair failed to recognize her motion.

10.  FACT:  The Chairman announced that the meeting was adjourned.

Here are my thoughts on what happened In LD-4 at our organizational meeting, and what I feel is still happening:

1.  FACT:  There are two opposing factions within LD-4, each looking for officer and delegate positions.  (That is called competition -- good for business and for leadership)

2.  FACT:  The faction currently "looking for positions" suddenly became very visible at the October LD-4 meeting by running a slate of people for the nominations committee, which they won by a large margin.

4.  FACT:  When the call was sent out, it contained proposed "special rules" for the November meeting, and also had a "special' proxy, with some small changes contained thereon.  (The rules were in conflict with our bylaws, and therefore not in order, as per Robert's Rules.  They would be voted down by the majority -- it would take a 2/3 majority to approve them, anyway.)

5.  FACT:  Now, after the meeting was closed down (umm, an "error"?), the LD-4 Chairman seems now to be in 'hiding' -- will not answer the phone nor emails -- at least not for those who opposed his slates' election

6.  Conjecture on my part:  I feel our Chairman is stonewalling -- he knows that he and his team can't win a fair election, and he also knows that if he waits long enough, it will be impossible for LD-4 to hold another meeting under the bylaws, and at that point, the officer and delegates are APPOINTED by the State Chairman, the County Chairman and the District Chairman.

7.  This afternoon, I ran into our Chairman at a local store.  I asked him what was happening, and he told me that they were "negotiating".  I asked who with, and he said the State.  I asked who on the "other side" were they talking to, as I was in close contact with them, and no one had stepped up yet.....  I also want to know WHY you would even WANT to negotiate Elected PC's votes away from them?  Why not just hold a meeting, and allow the PC's to vote -- that is what they were elected to do.  I also told him I thought he was "stonewalling", and asked him to stop it, and do the job he was elected to do.  In response, he walked away.

8.  We have looked the bylaws over high and low, and we cannot see any way to FORCE him to call another meeting, nor for our 1st vice-chair to take over in his place in a timely fashion.  Without some action and assistance from YOU, 180 Elected Precinct Committeemen and Women are going to be denied their right to vote on this issue, simply because someone wants to take their ball and go home.  Please call or email Bob, and ask him to stop being so childish, and do his job!

SUGGESTIONS:
Elected PC's in other Districts need to be aware of this, and make sure it does NOT happen in YOUR District.  In a meeting such as this, Robert's Rules says that it requires a motion and a vote to adjourn such a meeting.....but.......if he says the words without a motion or vote, too bad for you.......IF you hire a certified Parliamentarian, make sure he has the integrity to step in without being asked if needed -- after all, that is what you pay them for.

OTHER INFORMATION:
Just so you all know, the meeting was taped, and DVD's of the proceedings are being produced.  I suggest that if you want a real-life lesson in how to NOT run a meeting, take a look at the DVD.  If you have any questions about what I have said above, watch the DVD.  I will also tell you that there is much more on the DVD than I have talked about here.  For example, I did not tell you about the proxy that was presented for a DEAD person......yes, is was disallowed, as it should have been.

There is a LOT more on the DVD's, and I must say, it is a pathetic sight.

I contend that for a nation to try to tax itself into prosperity is like a
man standing in a bucket and trying to lift himself up by the handle.
-Winston Churchill