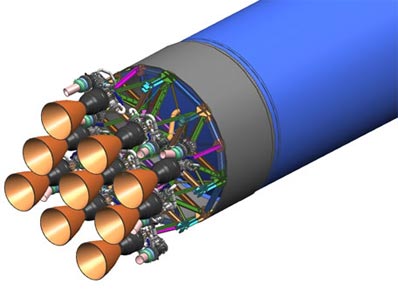 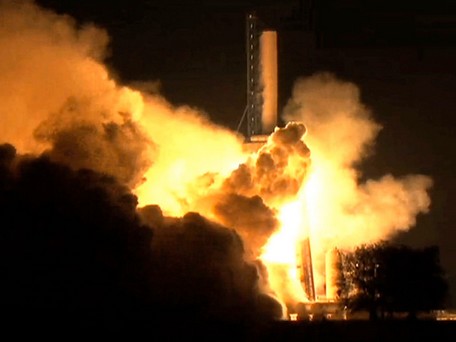 Hawthorne, CA - November 23, 2008 – Space Exploration Technologies Corp. (SpaceX) successfully conducted a full mission-length firing of its Falcon 9 launch vehicle's first stage at its McGregor Test Facility in Texas, on November 22. For the static test firing, the first stage remains firmly secured to the massive vertical test stand, where it fired for 178 seconds or nearly three minutes – simulating the climb of the giant rocket from the surface of the Earth towards orbit.

At full power, the rocket generated 855,000 pounds of force at sea level. In vacuum, the thrust increases to approximately one million pounds or four times the maximum thrust of a 747 aircraft. The test consumed over half a million pounds of propellant. All nine engines fired for 160 seconds, then two engines were shut down to limit the acceleration and the remaining seven engines continued firing for 18 more seconds, as would occur in a typical climb to orbit.

The test firing validated the design of SpaceX's use of nine engines on the first stage, as well as the ability to shut down engines without affecting the functioning of the remaining engines. This demonstrates the ability of Falcon 9 to lose engines in flight and still complete its mission successfully, much as a commercial airliner is designed to be safe in the event of an engine loss. Like an airliner, the Falcon 9 engines are enclosed in a protective sheath that ensures a fire or destructive loss of an engine doesn't affect the rest of the vehicle.

The Falcon 9 will be the first vehicle since the Saturn V and Saturn 1 to have the ability to lose any engine/motor and still be able to complete its mission without loss of crew or spacecraft. Engine out reliability proved crucial to mission success on two of the Saturn V flights.

"In the past month, we performed significant upgrades to the test stand and flame trench in preparation for this test," said Tom Mueller, Vice President of Propulsion for SpaceX. "We added the flight base heat shields around the engines to protect the bottom of the rocket from the prolonged blast of heat and vibration."

"The full mission-length test firing clears the highest hurdle for the Falcon 9 first stage before launch," said Elon Musk, CEO and CTO of SpaceX. "In the next few months, we will have the first Falcon 9 flight vehicle on its launch pad at Cape Canaveral, preparing for lift-off in 2009."

SpaceX is developing a family of launch vehicles intended to increase the reliability and reduce the cost of both manned and unmanned space transportation, ultimately by a factor of ten. With its Falcon line of launch vehicles, powered by internally-developed Merlin engines, SpaceX offers light, medium and heavy lift capabilities to deliver spacecraft into any altitude and inclination, from low-Earth to geosynchronous orbit to planetary missions.

On September 28, 2008, Falcon 1, designed and manufactured from the ground up by SpaceX, became the first privately-developed liquid fuel rocket to achieve Earth orbit.

As a winner of the NASA Commercial Orbital Transportation Services competition (COTS), SpaceX is in a position to help fill the gap in American spaceflight to the International Space Station (ISS) when the Space Shuttle retires in 2010. Under the existing Agreement, SpaceX will conduct three flights of its Falcon 9 launch vehicle and Dragon spacecraft for NASA, culminating in Dragon berthing with the ISS. SpaceX is the only COTS contender with the capability to return cargo to Earth and demonstrate the capability to carry crew to and from the ISS.

And scared the crap out of people! :-D