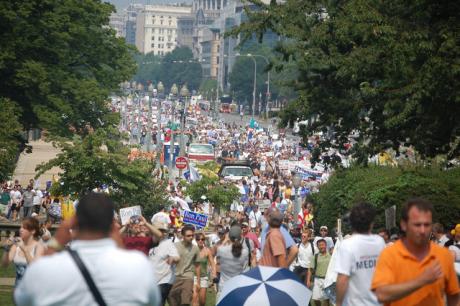 by Ron Paul
Billions of dollars were recently lost in the collapse of Bernie Madoff’s self-described Ponzi scheme, in which too-good-to-be-true returns on investments were not really returns at all, but the funds of defrauded new investors.  The pyramid scheme collapsed dramatically when too many clients called in their accounts, and not enough new victims could be found to support these withdrawals.  Bernie Madoff was running a blatant fraud operation.  Fraud is already illegal, and he will be facing criminal consequences, which is as it should be, and should act as an appropriate deterrent to potential future criminals.  But it seems every time someone breaks the law, politicians and pundits decide we need more laws, even though lack of laws was not the problem.

The government itself runs a fraud much bigger than Madoff’s.  Our Social Security system is the very definition of a Ponzi, or pyramid scheme.  If the government truly had an interest in protecting people’s savings, they would allow people to opt out of Social Security altogether.  We would cut wasteful spending, such as our overseas empire, to honor current obligations to seniors, and eventually phase the program out.  Instead, as with Enron and Sarbanes Oxley, I expect new, unrelated legislation to be proposed that further damages freedom in the name of protecting us, amidst loud proclamations that they have made the world safe.

Merely passing a law does not fix any problems, just as throwing paper at a recession does not stop it.  How can a government so complicit in mandatory public fraud effectively pre-empt private fraud?   I see no reason to believe that any new law, or regulatory agency will solve anything.  But I do see liberty slipping away every time Congress decides to “do something”.  We already have an oversight agency, the SEC, which did a poor job overseeing and preventing this, but does a great job hamstringing honest, productive businesses and driving them overseas.

Total trust in government solutions only creates moral hazard, and amplifies risky behavior.  Trust in government got us here.  We trusted government to eliminate risk, but it just made risk more creative and dangerous.  We trusted the Federal Reserve, a supra-governmental cabal of private banks, to know better than the free market what interest rates should be, and how to stabilize the business cycle, but like a spinning top that loses its balance, it has instead spun the business cycle and the economy wildly out of control.

No governmental activity can negate market forces or nullify the cardinal rule of caveat emptor.  Government can however, use our fears against us and promise unrealistic outcomes as a means to consolidate power and erode our liberties.  Liberty comes with risk.  This is a fact of life.  But life without liberty is not much of a life at all.

The only way the American people will get through these difficult times is through our own resilience and ingenuity.  At best, the government is irrelevant in finding prosperity again.  At worst, government can present a massive obstacle for the economy to overcome.   If we do not wise up and rein government back in to its Constitutional limitations, bloated government could be a cumbersome unnecessary weight the economy will continually have to support to stay afloat.

If the government does it , it is legal. The purpose of the government is to tell you what is legal and you should not question that. Now put on your nice brown uniform with that pretty red and black arm band and go outside and march.