President-elect Barack Obama opined today, “[A] lack of spending leads to lost jobs which leads to even less spending; where an inability to lend and borrow stops growth and leads to even less credit.” There it is, neatly wrapped up in one sentence: the infamous and much-ballyhooed Liquidity Trap(tm).

The solution to breaking a Liquidity Trap(tm), apparently, is to spend, spend, spend. It doesn't matter what you buy, just spend. In fact, quit reading this article right now, gather your belongings, and trade them all for Sea Monkeys. If every man, woman, child, and business did that, right this instant, all the economic woes of the world would magically disappear overnight. The Sea Monkey economy can save the world!

This is, of course, nonsense on a stick.

Perhaps I'm over-simplifying. Maybe “spend, spend, spend” means “be judicious in your investments and products you choose to consume, but, by all means, invest and consume.” I'll buy that, but I have to point out that that is what consumers and investors do all day, every day, with or without your urging. 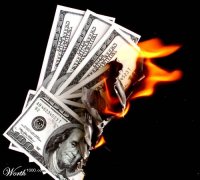 There are very, very few people who cash their paychecks, bring the money home, pile it on the kitchen table, and wonder, “what am I going to do with all this cash?” There are even fewer who are so immobilized by their indecision that they take the pile out back and burn it. However, if “spend, spend, spend” means “be judicious, but invest and consume”, the money-burners are the only target of that message.

Is there really such a rash of money-burning that it is crippling the world economy?

No. The third, and correct, possible meaning of spend3 is “spend your money on the products and investments which I choose for you.” That is the heart and soul of Keynesian and classical economics: “I don't like how you are spending money, so I'll invent highfalutin terms like Liquidity Trap(tm) and aggregate demand to make it sound as if you are not spending money.”

All I Got was this Lousy T-Shirt

For illustration, let's examine a simple economy in which the only consumer product is shirts. Shirtland manufacturers produce t-shirts, in men's and women's styles. There are two families in Shirtland, only one of which has a child, so it is easy to model the demand for shirts:

Total demand for t-shirts, then, is: 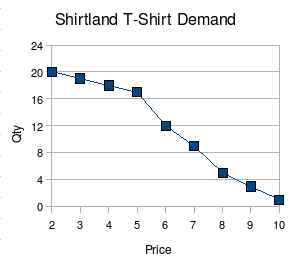 This assumes that “t-shirts” is a homogeneous product. Since it's unlikely, though, that Tom and five-year-old Lucy wear the same size t-shirt, different size shirts will have to be manufactured, and each size will have it's own demand schedule: 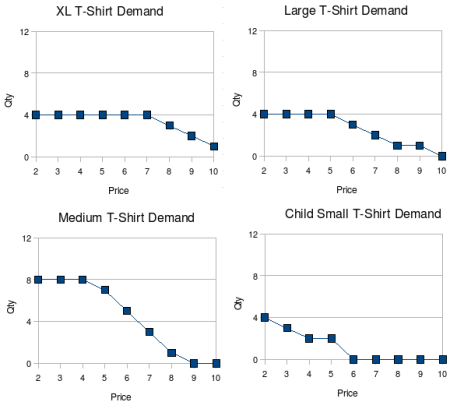 Even that assumes that one XL t-shirt is the same as every other. Tom's not picky, but his demand for pink t-shirts isn't as high as, say, black or blue shirts. So, each color-size combo has it's own demand schedule. Likewise, Lucy is into Pooh this year, but next year it may be Hello Kitty, both on pink shirts, but she will have grown, so a new size, etc.

If t-shirts are manufactured in child S-M-L and adult S-M-L in both men's and women's styles with two different types of appliqués for the child sizes, XL only in the men's style, and four colors (blue, black, white, and pink) that's 76 different products with 76 different demand schedules. All still very manageable, but it begs the first question:

How do you add the demand schedule for pink girl's child mediums with Pooh appliqué to the men's blue XL demand schedule and arrive at a meaningful number called “aggregate t-shirt demand”?

Of course, the manufacturers don't use any such thing. When estimating demand for their products, they use the individual demand schedule for each product. They create a production process that includes so many yards of such-and-such color cloth and thread and so much tailoring time for each size and style of shirt. Each t-shirt factory and retail outlet allocates so much floorspace for production and sales. Each factory determines the number of sewing machines they need. 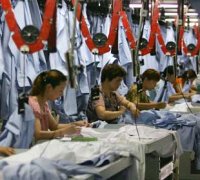 Each weaver uses the demand estimates to determine what color and how much cloth to produce, and how many looms they'll need. Cotton farmers buy land, tractors, cotton gins, and fuel. Steel is needed for the sewing machines, looms, tractors, factories, and the machines that make those items, so add coal, iron, and electricity to the list.

Wow! Our simple economy, who's only consumer good is t-shirts, has blossomed to an array of products and services and we haven't even considered food and housing for the various types of labor employed by the various stages of production.

That begs question number two:
How do you add tons of coal to bales of cotton, sewing machines, hours of labor, and men's blue XL t-shirts to arrive at a number that you can call “aggregate demand”?

As it turns out, both questions 1 and 2 (which are really the same question) are more than trivial. As a t-shirt manufacturer, you need to know whether it is better to purchase an additional sewing machine or hire two seamstresses for an equivalent output of t-shirts per hour. As you can't compare hours to machines, you must convert both to their cost. 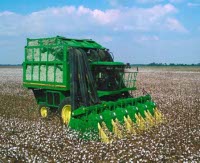 Translated through the various stages of production, the prices of the inputs transmit the t-shirt demand functions. Without ever speaking with Tom, the farmer can decide how many acres to put into cotton production, and how many tractors to purchase. No one at the steel mill has to go to Lucy's school and ascertain whether she is leaning towards Pooh or Hello Kitty.

Put simply, it is the price mechanism that tells all the actors in an economy what resources to put to use where and when.

Prices are also the answer to questions 1 and 2. To add tons of coal to bales of cotton, one merely has to convert both to their unit price. Twenty tons of coal at 50 units per ton + 100 bales of cotton at 5 units per bale equals a total of 1,500 units. In a modern economy, that is exactly how aggregate demand is calculated.

If we take total domestic Consumption plus Government spending plus Investment plus eXports less imports we arrive at the measure of aggregate demand called Gross Domestic Product.

Take a moment to marvel at the awesome scope of such a simple equation. It takes each item purchased in an economy, multiplies it by its price, and adds it all up into one very big number (the US GDP was $14.3 trillion in 2007).

GDP, or any other measure of aggregate demand, is useful to the individual actors in an economy only as a lagging indicator of trends. It transmits no information useful in the allocation of scarce resources that the price mechanism and profit and loss don't already transmit. So, that begs questions 3 and 4:

Why would anyone need to calculate aggregate demand, and, what does that have to do with President-elect Obama's description of a Liquidity Trap(tm)?
I'll answer those questions tomorrow in Part II.