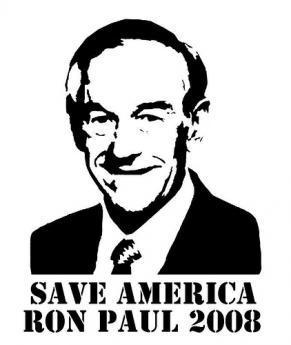 by Ron Paul
With attention turning to the next big economic stimulus package, questions are still swirling about our economic troubles.  How did we get here?  How do we get out?  As usual, Washington has all the wrong answers.  According to many politicians, we got here by not spending enough, not consuming enough, and not regulating enough.  Now government, like some mythical white knight, is going to ride in to save the day by blanketing the economy with dollars, hiring an army of new bureaucrats, creating make-work jobs, and sending everyone some form of a bailout check.  The debate seems to focus on whether this will cost enough to save the economy, or if this is just a “down payment” with much more government spending to come.  Talk like that would be comical, if the results weren’t going to be so tragic.

The results will be worsening economic woes until we learn our lesson.  But instead Congress is behaving like drug addicts who must hit rock bottom before they are ready to face reality. They are playing foolish games with the economy now because they are thinking only of political expedience.  This talk of job creation is a perfect example.

Contrary to the belief of many, the goal of the economy is not job creation.  Jobs can be a sign of a healthy economy, as a high energy level can be a sign of a healthy body.  But just as unhealthy substances can artificially give the addict that burst of energy that has nothing to do with health, artificially created jobs just exacerbate our problems.  The goal of a healthy economy is productivity.  Jobs are a positive outcome of that.   A “job” could be to dig a hole one day, and fill it back up the next, or perhaps the equivalent at a desk.  This does no one any good.  But the value in that paycheck ultimately has to come from taxing someone productive.  Some think this round-robin type of economic model is supposed to get us somewhere.

Politicians and bureaucrats have already done their fair share to ensure that jobs in the private sector are prohibitively complicated and expensive to create.  They are now shocked that the economy is shedding jobs, and want to simply create hundreds of thousands of jobs to make up for the job losses, through another so-called economic stimulus package. The private sector must be permitted to do that, but instead they are massively burdened with taxes and webs of red tape and regulation.  Washington’s bandaids will only prolong this agony.  The Austrian school of economics teaches that only a free market economy, unencumbered by onerous government controls, creates long-term prosperity.  Politicians, however, tend to be notoriously short-sighted.

I am left with these questions – who is going to be left standing to tax in the private sector to pay for all these public sector make-work jobs?  Is Washington really to be considered some sort of savior for creating unproductive jobs in place of the productive jobs they eliminated?

We are at an economic dead-end and those in power are in denial.  The truth is our economic problems are due to loose monetary policy, central economic planning, and the parasitic expenses of government.  Unless we assess these problems honestly, we unfortunately have a long way to go until, like the junkie, we hit rock bottom.
source