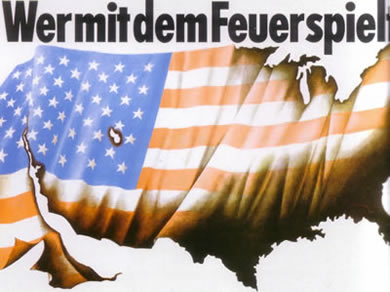 Those who play with fire....
I have recently become involved with a group of people who have started a statewide protest of photo enforcement cameras, that is spreading nationwide. When they first came to me (actually I was just along for the ride), I was impressed by their reasoning: Here is a cause that a wide variety of people really ... really hate.  Photoradar.  And as they taught me, it is photo enforcement, as many of these systems no longer use radar to measure speed.

I really thought this movement could have legs after the Ron Paul R3VOLution.  I was right.

These guys had some ground rules.  And they have worked well.  Don't be involved in anything illegal.  Cause no damage.  Protest your liberties being violated.  Always be polite. Get the word out.  Support those elsewhere who rally to your cause.

In this CameraFraud has been a growing success.  What started out a few short months ago as four guys is now almost 1,200 members and growing.  People from all walks of life, especially law enforcement personnel are coming over in overt or covert support.  The movement grows bigger after every protest.  So your presence counts. 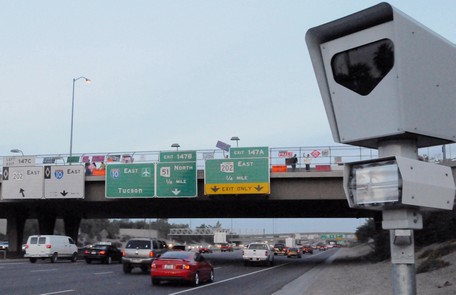 The Republican Party of Arizona sees the potential in using this as a rally point in 2010 to get out the vote.  Which of course means they won't want to see anything change until after that election and maybe not even then.  Hopefully the Progressives see this for what it is as the looting of the poor and surveillance state tactics being deployed by the state.  But I will take support from wherever I see it.  I may only trust it so far, but we all have our agendas.  It is the common things we can agree on here that drive progress to bring these surveillance cameras down.

When this began, the governor had not yet overtly come out and stated that this photo enforcement was about revenue generation.  She subsequently did, and then of course once she got her legislation, now baldfaced and unashamedly lies stating it is 'all about public safety and not revenue.'
Yet no drunk or reckless driver has ever been pulled over by a camera.

It is from this that the governor has directed her fascist guards to implement her program of statewide looting and surveillance.  Along the way she has made sure her quislings and toadies bullied any obstacle into forbearance.  And now that she is headed for the head of the U.S. Department of Homeland Security I greatly fear not just for my state, but further for my countrymen.  Neither your security nor your safety are secure from the ravenous appetite of this tyrant.

She has ordered without lawful authority her gendarmes at the DPS to place surveillance cameras upon the highways both permanent and mobile.  She has connected them into a 24 hour, seven day a week, 365 day a year video taping and storage operation, in which any vehicle's license plate is noted as it passes by for later retrieval as to where and when it passes any camera.  This data is stored for at least six months to comply with the statues of limitations in any ticket issued.  I suspect its storage is only limited by whatever price for storage capacity is willing to be paid.  And photo enforcement is lucrative.  So lucrative that where the money comes from would not be a problem.  Nor would funding ever more cameras.

What is the purpose of the Department of Public Service (DPS; aka the State Police)? In the past I said the DPS was the most highly trained and educated police force in the state.  And that they were also the most useless.  Not through any fault of their own.  But now that all the counties are perfectly capable of providing Sheriff's coverage their sole purpose has become the issuance of tickets on the highways of the state.  That is it.  Traffic enforcement.  Expensive cops for such a trivial need.

Oh, I know they assist stranded motorists, and report and even fix all sorts of problems.  But the plain truth, every other function they do could be provided by private businesses [roadside service] for far less cost.  No.  The only thing they can do that private business cannot is issue tickets.   Until now.

Now along comes a machine operated by either no one or a single individual who doesn't need much education that can sit in a van and ticket the crap out of passing cars all day.  A single parked van generates hundreds, if not thousands of tickets a day.  No cops need be present.  Does it make sense to you that the DPS has wholeheartedly embraced this obvious cost cutting parable?  It sure must to the DPS, because they are expending considerable resources to monitor and suppress the activities of CameraFraud who are only trying to bring an end to photoenforcement.

Now there are plenty of municipalities that don't like protesters disrupting ... well anything.  But in this regard, there are a lot of cops in all jurisdictions who are on our side in this.  As long as we stay on the public easements, don't block anyone on the sidewalks and don't cause any vandalism they don't care, and grant us a lot of slack.  A surprising number of beat cops and promoted former beat cops support us even if it has to be covertly on their part.  But I don't know whether it is because it is new, or because the leadership is under pressure to rake in the dough, but we see a lot of DPS officers where there shouldn't be any lately, surveilling protesters who are opposing machines that threaten their jobs in the long term.  [In fact, any police who wish to autonomously forward copies of memos you have received on photoenforcement and what happens to you if you get your car flashed while carrying out your duties, send it to me: Powell Gammill, PO Box 15061, Phoenix, AZ 85060.]

So what is wrong with the DPS spying on a first amendment protest?  Do protesters have an expectation of privacy?  Are Rights being violated?  Are crimes being committed?

Does anybody have a expectation of privacy in public? No.  Well, except some cops who really don't like being photographed...even if they happen to be photographing people.  Hey, what can I say?  I have seen arrests made for endangering police for filming police.  They do this because they can.

Is there something wrong about the cops surveilling protesters in public?  I greatly prefer the Phoenix PDs overt, yet subdued presence.  They tolerate protest.  As a result they don't get a black eye, and frankly it is a mature response... a couple of nonuniformed low key but clearly identified detectives make sure everyone is reasonably respectful to property and one another.  Works great.

The DPS on the other hand...well as can be seen prefers to spy and arrest.  The problem with police surveillance (overt and covert) is it intimidates the public from expressing their Rights.  It puts fear into the public in attending meetings and rallies. 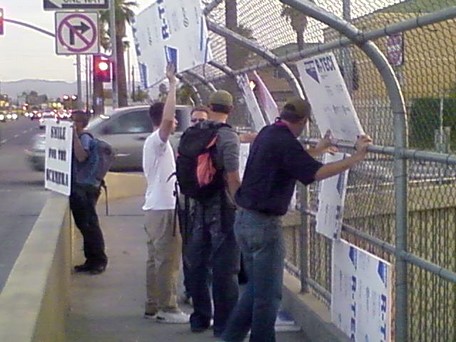 Nov. 23 I-10 & 16th St.
Freedom's Phoenix cameraman Jason Sheldon (photo #7), clearly badged "Press" and retreating off of the freeway when nabbed at the off ramp (photo #1).  I identified myself, gave my business card as Senior Editor and identified my cameraman as working for me getting news video shots of the protest.  All of the protestors on the overpass were threatened with arrest by this arresting officer on the overpass (photo #9) for interfering with the flow of traffic (distracting drivers) for waiving signs.

It breeds suspicion that people who attend may in fact not be there for similar cause, but are in fact infiltrating authorities conducting up close surveillance or hired informants placed by authorities as disruptive agitators (agent provocateurs), whose mission is to set up protestors for arrest on criminal charges.  We have seen this where the most violent advocating "protesters" at the GOP and Democratic National Conventions turned out to be undercover cops, who's actions were clearly meant to discredit peaceful protesters and provide cover for crackdowns by authorities.  This is standard operating procedure by politically appointed police chiefs. 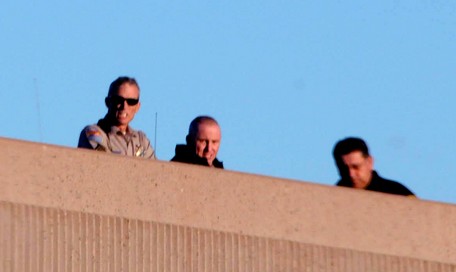 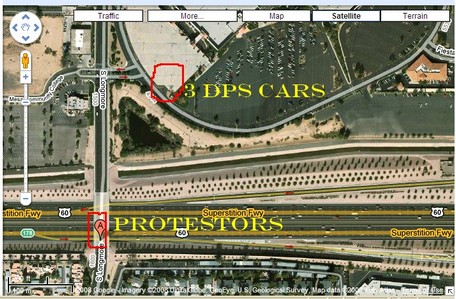 The people in this nation have an absolute Right to assemble and peaceably protest whatever they wish.  To communicate and distribute their grievances in whatever manner they wish so long as private property Rights are not violated.  No legitimate law or court ruling exists contrary to this.

So come join me today, (Friday, Jan. 16, 2009) in what will be an enormous protest being held at two locations in the Phoenix metro area.   Oppose the surveillance nation.  Oppose being looked upon as a revenue source.  Oppose the fascist police state.

There will be plenty of signs for everyone, or you can bring your own (as you can see I do in large letters). 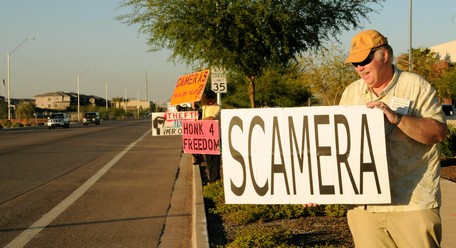 You do not have to be a CameraFraud member.  Are you pissed off enough about these cameras on our highways and on our streets to donate a bit of time and have some fun?  Lets break 100 people protesting in both locations!  Weather is nice.  We go until sunset.  Starts at 4PM.

East Side Speed Camera Protest (51 to attend)
http://tinyurl.com/EastsideGoogleMap (across from Fiesta Mall)


West Side Speed Camera Protest (77 to attend)
http://tinyurl.com/WestsideGoogleMap (across from some Mall)