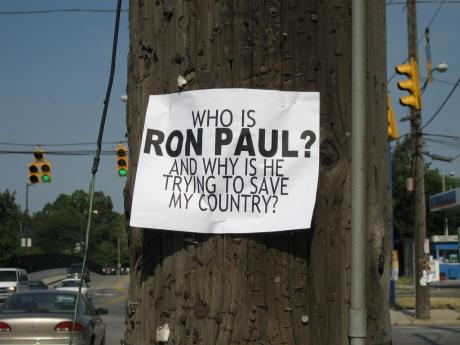 This week the House is expected to pass an $825 billion economic stimulus package.  In reality, this bill is just an escalation of a government-created economic mess.   As before, a sense of urgency and impending doom is being used to extract mountains of money from Congress with minimal debate.  So much for change.  This is déjà vu.  We are again being promised that its passage will help employment, help homeowners, help the environment, etc.  These promises are worthless.  This time around especially, Congress should know better than to pass anything of this magnitude without first reading the fine print.  There a many red flags that I have found in this bill.

At least $4 billion is allocated to expanding the police state and the war on drugs through Byrne grants, which even the Bush administration opposed, and the COPS program, both of which are corrupt and largely ineffective programs.

To help Big Brother keep a better eye on us and our children, $20 billion would go towards health information technology, which would create a national system of electronic medical records without adequate privacy protection.  These records would instead be subject to the misnamed federal “medical privacy” rule, which allows government and state-favored special interests to see medical records at will.  An additional $250 million is allocated for states to nationalize individual student data, expanding Federal control of education and eroding privacy.

$79 billion bails out states that haphazardly expanded their budgets during the bubble years, but refuse to retrench and cut back, as their taxpayers have had to, during recession years.

$200 million expands Americorps.  $100 million goes to “faith-and-community” based organizations for social services, which will further insinuate the government into charity and community service.  Private charities are much more efficient and effective because they are directly accountable to donors, while public programs tend to get rewarded for failure. With its money, the Federal Government brings its incompetence and its whims, while creating foolish dependence.  This is sad to see.

Of course the bill is rife with central planning projects.  $4 billion for job training, much of which will be used to direct workers into “green jobs”.  $200 million to “encourage” electric cars, $2 billion to support US manufacturers of advanced batteries and battery systems, which is yet another function of government I can’t find in the Constitution. Not to mention $500 million for energy efficient manufacturing demonstration projects, $70 million for a Technology Innovation Program for “research in potentially revolutionary technologies” in which government, not supply and demand, will pick winners and losers.  $746 million for afterschool snacks, $6.75 billion for the Department of Commerce, including $1 billion for a census.

This bill delivers an additional debt burden of $6,700 to every American man, woman and child.

There is a lot of stimulus and growth in this bill – that is, of government.  Nothing in this bill stimulates the freedom and prosperity of the American people.  Politician-directed spending is never as successful as market-driven investment.  Instead of passing this bill, Congress should get out of the way by cutting taxes, cutting spending, and reining in the reckless monetary policy of the Federal Reserve.
source

4 Comments in Response to Stimulus for Who?<br>by Ron Paul

AnAJLibertyLover, $6,700 per person is based on the cash value of the bill. Since the gov doesn't have $825 billion to spend, it has to borrow it, and pay interest.

This is a great article by Ron Paul.

I am always interested in how the figures of the costs are calculated for every man woman and child. This article references an $825,000,000,000 stimulus bill and calculates it will be $6,700 debt burden for each American. I referenced this number to a colleague who said it was incorrect. So I calculated it using 300,000,000 as the population and I only compute $2750.

I would like to be able to accurately quote numbers from well written articles such as this, especially those that speak of the $50 Trillion future debt promises we have coming at us.