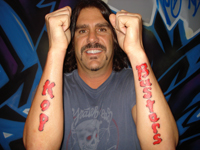 Via a sharp-eyed reader:  KWES NewsWest 9 has a poll on their website asking the nebulous question, "do you think any charges should be filed in connection to the KopBusters case?"

In case you are unfamiliar with the KopBusters "case":  Barry Cooper and some close confidants set up a grow house in Odessa, TX.  In that grow house, they placed two miniature Christmas trees.  Based on an anonymous tip, Odessa Police raided the home, only to find they were the stars of a new reality show called Kop Busters, in which the police pretend they have probable cause for a warrant, the judge pretends he cares, and the unsuspecting raid team finds themselves broadcast as home invaders.

Wh‎ile many have focused on the existence of a warrant, what really matters is the police investigation and affidavits leading to the production of the warrant.

In this "case", on the say-so of anonymous tipster, Odessa police surveyed the home and verified that, from the outside, it looked exactly as the anonymous tipster alleged.  On that basis alone, the Odessa PD sought, and secured, a warrant to search the home.  The entire point of the Kop Busters operation was to prove that the police investigation into illicit operations was lacking, and, in that respect they succeeded spectacularly.


Now, it's time for you to act.  If you believe the police officers who failed to properly investigate this anonymously-alleged grow house were justified in their actions, please vote "no" in the NewsWest 9 poll.
While we encourage everyone to vote, due to the nebulous nature of the question the more important part is to email the news desk as to why you voted as you did.
If you feel these police officers overstepped their bounds in securing this warrant, it is very important to  please vote "yes" in the poll AND copy/paste the following message to mkurtz@kwes.com :

I voted "yes" in the NewsWest 9 Kop Busters poll because I believe the police officers who instigated this raid should be held accountable for violating the sanctity of a resident's home without probable cause to believe there was illegal activity happening within the home.

MAGA Arizona Candidate Kari Lake: Under My Plan We Will Shoot Down the Cartel Drones (VIDEO)

How the Drug War Dies