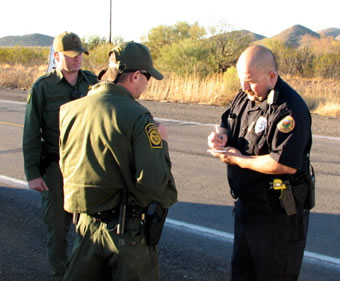 This is a quick update regarding the December 20, 2008 U.S. Border Patrol/tribal police encounter I previously discussed here.

Tribal police Officer Robert Carrasco, Badge #166, with the Tohono O'odham Police Department worked closely with U.S. Border Patrol Agents to maliciously cite me for impeding traffic while I was being seized by armed federal agents in front of two stop signs at a Homeland Security checkpoint.

Officer Carrasco appears to the right in the photo above while the two Border Patrol agents who left their checkpoint posts to assist Officer Carrasco with impeding my right to travel after waving me through the DHS checkpoint appear to the left.

The initial court date on the citation was set for January 16, 2009 but was delayed until February 17th. In lieu of appearing, I submitted a written plea of "not responsible" along with a Motion for Pre-Hearing Discovery. I'm now waiting for a new hearing date to be set by the Pima County Justice Court along with the court's ruling on the discovery motion.
Normally, pre-hearing discovery isn't allowed for civil traffic infractions but court rules make an exception for extraordinary circumstances. The extraordinary circumstance justifying discovery in this case are discussed in the motion and if granted, will enable me to pursue discovery through the tribal police and U.S. Border Patrol.

Further information will be posted as it becomes available.

Homeland Security's 'Disinformation Board' is Even More Pernicious Than it Seems

Biden's New 'Minister Of Truth' DEMANDED The Government Lock People Down, She Is ORWELLI

Oh God It's Going To Get SO Much Worse