The Groundswell Has Begun 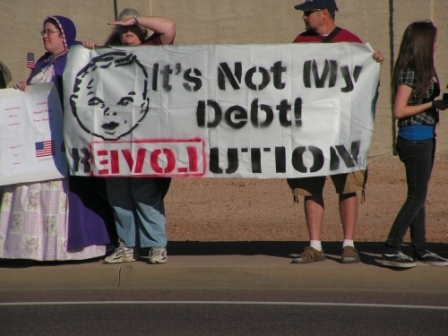 In a well-insulated “free speech zone” outside Mr. Obama’s appearance at Dobson High School in Mesa, AZ , citizens questioning Barack Obama’s intentions for America outnumbered Obama supporters by at least 20:1.  Scores of hand-made signs and banners were carried by the citizenry, some hoping to alert the President of their concerns, others simply offering their support. However, the 1000+ in attendance outside did not get as much as a glimpse of Mr. Obama.  As the heavily-guarded Presidential motorcade entered school property, it was at least 150 yards from the nearest boundary of the pre-set “free speech zone.”

The lack of access to the President did nothing to damper the free exchange of ideas among those in attendance.  The event was not marred by violence of any sort, but discussions did get heated on numerous occasions.  A small minority of Obama supporters were overheard accusing detractors of racism for not supporting the first black President, but for the most part the discussions remained issue-oriented.

Ed Vallejo, organizer of the Ron Paul “Campaign for Liberty” Meetup group in Phoenix offered the use of his bullhorn to anyone who wished to be heard among the crowd.  Many people, from all walks of life and with widely divergent points of view, took advantage of the opportunity to voice their opinion above the din of the crowd. It proved to be an extremely powerful exercise of the first amendment’s guarantee of the right to free speech.  One woman took the opportunity to lead a prayer for peace, while another tearfully pleaded for everyone “to just get along and get behind the President.” Many others who wished to be heard cited various erosions of individual rights, the illegitimacy of the Federal Reserve, or the rise of the police/surveillance state as the focus of their concern.  One particularly handsome and eloquent individual (ok, it was me) took the bullhorn and shouted Alex Jones’ immortal rebel cry, “The answer to 1984 is 1776.”

Muhammad Ali once said “A rooster crows only when it sees the light.  Put him in the dark and he’ll never crow.  I have seen the light and I’m crowing.”  It would appear that many Americans are starting to feel similarly.  As the title states, it is apparent that the groundswell has begun as more and more people continue to lose their jobs, their homes, their pensions, and their investments.  At the same time, many are also becoming aware that their rights and liberties are being lost in the same omnipresent governmental vacuum.

Not only are many people “awakening” as it is said in activist circles, there is also the sad realization that, especially for those of retirement age, everything they have worked so hard for is evaporating into thin air for reasons beyond their control.

In her 1969 book entitled On Death and Dying, Dr. Elisabeth Kubler-Ross identified the five stages by which people deal with grief and tragedy; denial, anger, bargaining, depression, and acceptance.  She also identified that these steps do not always occur in the same order.  For many Americans and for people around the world, these five stages are well underway, and large numbers of people are coming to realize that a “deer in the headlights” look will only serve to get them run over.  As they lose everything and watch their lives unravel before their very eyes, many also realize they will have little if anything left to lose.

After all, and as much as we try to deny it, we are animals first and human beings second.  Every animal, when faced with a life-threatening danger, ultimately do one of two things when cornered:  fight or flight.

So, which is it going to be? Me, I choose to fight. 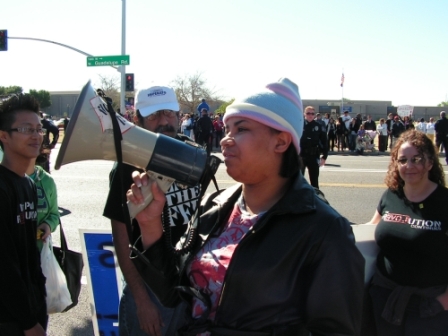 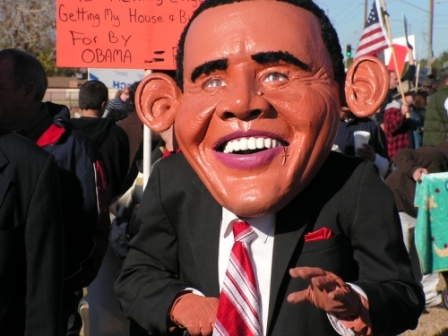 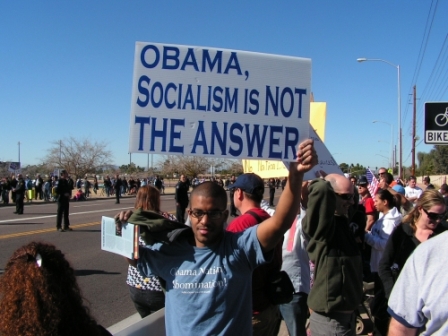 1 Comments in Response to The Groundswell Has Begun

Jet my man, you are so right.

Yesterday was a far cry from the beginnings of 'the Freedom Movement' back in 2007! It may take a little time, but I saw a LOT of people yesterday I never saw before - and I've been to most of the protest-oriented events that have happened in that time span.

It was a relatively good day for us - too bad it didn't impact the POTUS in any way whatsoever (other than boost his confidence in his 'handlers').

Some of his followers are being sought by the FBI. It's not stopping the leader of the Oath Keep

There WAS a color revolution in the US after all and its architects now BOAST...

Cool, cheap, and easy ideas for getting your message out using chalk markers, spray chalk