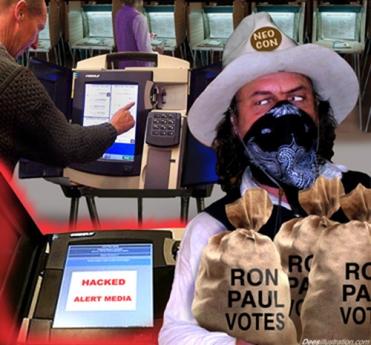 THE RTA BALLOTS MUST NOT BE MOVED TO PHOENIX

NO TRANSPARENCY! CHAIN OF CUSTODY MUST BE IN

JUST SAY NO!  This Maneuver would HIDE the ballots and keep we the people from obtaining poll tapes

From David  Griscom blogging at http:// www.markcrispinmiller.com
“ It now appears that a Monday morning hearing at the Pima County Courthouse may decide this critical-for-American-democracy matter for better of for worse: For better if the RTA ballots are preserved and handled with a rigorous chain of custody until counted in full public view; for worse if the ballots are destroyed - OR if a single person or office is granted control of the ballots with no chain of custody for an extended period of time before either claiming their hand count agreed with the original official count and/or releasing what they claim to be the original ballots for public counting.

Judge Harrington accepted Pima County’s arguments, denied jurisdiction and refused to issue a court order that would prevent election tampering in future elections, after stating that in his court the people would have a level playing field. Link to Bill Risner’s Motion for Reconsideration and other documents:

However, the AZ Daily Star article Ariz. AG asks for Pima County's transportation election ballots | www.azstarnet.com ® now says that Pima County is on board with not destroying the ballots and declines comment on the County’s change in position.

The Pima County Republican Party has now joined the Democratic party to ask that the RTA ballots be preserved as evidence in  putting more pressure on Judge Harrington. Risner plans to ask the Judge for a Stay, to postpone the destruction of the ballots and to KEEP THE BALLOTS IN PIMA COUNTY pending appeal.  Risner will file a motion to examine the poll tapes and yellow sheets from the 2006 RTA election. The County and Pima County Treasurer Beth Ford’s office earlier last week agreed to allow a search for these records now boxed with the RTA ballots. The Court would set the conditions in a separate order preserving TRANSPARENCY AND CHAIN OF CUSTODY. We NEED A STRONG PUBLIC PRESENCE IN COURT.  We would hope that the Judge would reasonably agree on to issue a Stay so critical to preserving the evidence to protect what we’ve been fighting for.

On January 29, Dr. Tom Ryan, a member of the newly established Pima County Democratic Party Election Integrity Commission, presented data showing that election totals changed in the 2006 RTA election which points to possible manipulation.  Ryan’s study raises questions, but reaches no conclusions that the RTA results would be overturned.  Only examination of the ballots would offer proof. His examination of the electronic election database indicated multiple uploads of memory cards from precinct machines and discrepancies in the vote totals, some totals going down, others going up from the first backup postponed until 3 days after the election to the final official total. All 22 of the Oro Valley memory cards were affected.   The Commission has given Election Director Brad Nelson 60 days to respond.  All proceedings and documents of the Pima County Election Integrity Commission are public information.
In Arizona we’ve all experienced the pain that elections have consequences and that we must maintain vigilance and participate to make democracy work for us to overcome the powerful forces that now threaten us. Please be with us in Court, February 23, 10AM.