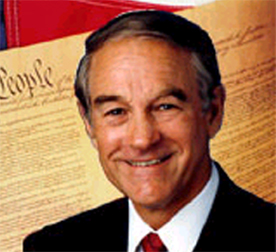 This week the Federal Reserve responded to the American people’s increased concerns over our monetary policy by presenting new initiatives aimed at enhancing the Fed’s transparency and accountability. As someone who has called for more openness from the Fed for over 30 years, I was pleased to see the Fed acknowledge the legitimacy of this need.

The Federal Reserve controls the flow of money and credit in our economy because Congress has abdicated its responsibility over the nation’s currency.  This process therefore occurs centrally, and almost completely outside the system of checks and balances.  Because of legal tender laws, people are left with no real choice, except to build their lives and futures around this monopoly currency, vulnerable to powerful central bankers.  The Founding Fathers intended only gold and silver to be used as currency, however, inch by inch over the decades, this country has backed away from this important restraint.  Our money today has no link whatsoever to gold or silver.  For many reasons, this is extremely dangerous, and has a lot to do with the boom and bust cycles that have resulted in the crisis in which we find ourselves today.

The Fed is now pledging to reveal to the public more about its economic predictions, and calls this greater transparency.  This is little more than window-dressing, at best, utterly useless at worst.  Many analysts, especially those familiar with the Austrian school of economics, saw the current economic crisis coming years ago when the Federal Reserve was still telling the American people their policies were as good as gold.  So while it might be nice to know what fantasy-infused outlook the Fed has on the economy, I am much more interested in what they are doing as a result of their faulty, haphazard interpretation of data. For instance, what arrangements do they have with other foreign central banks?  What the Fed does on that front could very well affect or undermine foreign policy, or even contribute to starting a war.

We also need to know the source and destination of funds provided through the Fed’s emergency funding facilities.  Information such as this will provide a more accurate and complete picture of the true cost of these endless bailouts and spending packages, and could very likely affect the decisions being made in Congress.  But with so much of the Fed’s business cloaked in secrecy, these latest initiatives will not even scratch the surface of the Fed’s opaque operations.  People are demanding answers and explanations for our economic malaise, and we should settle for nothing less than the whole truth on monetary policy.

The first step is to pass legislation I will soon introduce requiring an audit of the Federal Reserve so we can at least get an accurate picture of what is happening with our money.  If this audit reveals what I suspect, and Congress has finally had enough, they can also pass my legislation to abolish the Federal Reserve and put control of the economy’s lifeblood, the currency, back where it Constitutionally belongs.  If Congress refuses to do these two things, the very least they could do is repeal legal tender laws and allow people to choose a different currency in which to operate.  If the Fed refuses to open its books to an audit, and Congress refuses to demand this, the people should not be subject to the whims of this secretive and incompetent organization.

How Long Before The Fed Tries To Manipulate Long-Term Rates Lower?

Peter Schiff: The Fed Has Handed The US Government A Blank Check

What's the Problem With Stimulus Checks, Trade Deficits and the Minimum Wage?