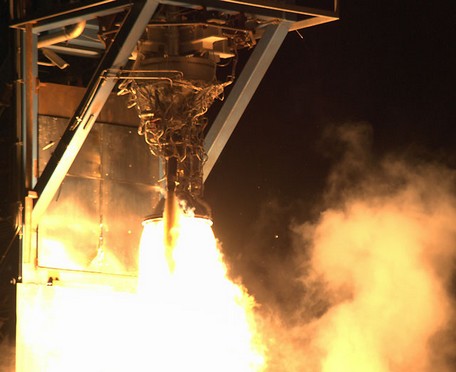 The new engine, which powers the upper stage of SpaceX's Falcon 9 launch vehicle, demonstrated a vacuum specific impulse of 342 seconds – the highest efficiency ever for an American hydrocarbon rocket engine. Thrust was measured at approximately 92,500 lb of force in vacuum conditions and the engine remained thermally stable over the entire run.

"Specific impulse, or Isp, indicates how efficiently a rocket engine converts propellant into thrust," said Tom Mueller, Vice President of Propulsion for SpaceX. "With a vacuum Isp of 342 seconds, the new Merlin Vacuum engine has exceeded our requirements, setting a new standard for American hydrocarbon engine performance in space."

The Merlin Vacuum engine provides the final push that delivers customer spacecraft into their desired orbits. A redundant ignition system ensures the engine can shut down and restart multiple times. The engine can also operate at a reduced thrust to achieve optimum performance. During recent tests, the engine was successfully throttled down to 75 percent of maximum thrust, and upcoming tests will demonstrate throttling to approximately 60 percent of maximum thrust. 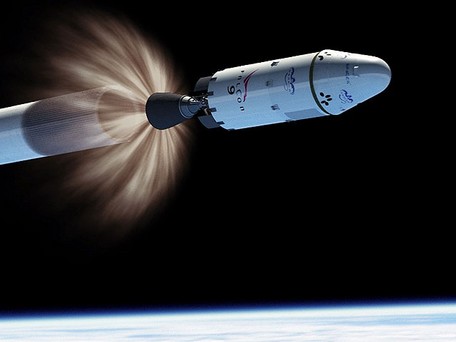 "Falcon 9 was designed from the ground up to provide our customers with breakthrough advances in reliability," said Elon Musk, CEO and CTO of SpaceX. "In successfully adapting our flight tested first stage engine for use on the second stage, this recent test further validates the architecture of Falcon 9, designed to provide customers with high reliability at a fraction of traditional costs."

SpaceX's Falcon 9 launch vehicle and Dragon spacecraft were recently selected by NASA to resupply cargo to the International Space Station after the shuttle retires in 2010. The inaugural flight of Falcon 9 is scheduled for later this year from SpaceX's launch pad SLC-40 at Cape Canaveral, Florida. 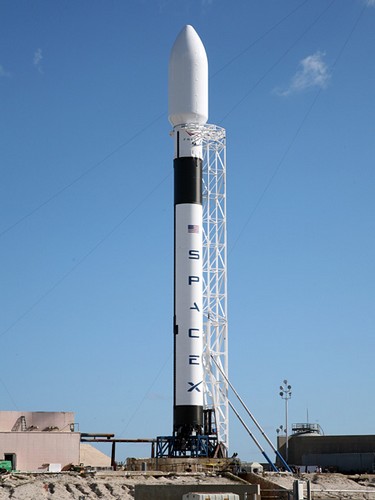 SpaceX is revolutionizing access to space by developing a family of launch vehicles and spacecraft intended to increase the reliability and reduce the cost of both manned and unmanned space transportation, ultimately by a factor of ten. With its Falcon line of launch vehicles, powered by internally-developed Merlin engines, SpaceX offers light, medium and heavy lift capabilities to deliver spacecraft into any altitude and inclination, from low-Earth to geosynchronous orbit to planetary missions. On September 28, 2008, Falcon 1, designed and manufactured from the ground up by SpaceX, became the first privately developed liquid fuel rocket to orbit the Earth, demonstrating that low cost and reliability can be coupled in commercial spaceflight.

As a winner of the NASA Commercial Orbital Transportation Services competition (COTS), SpaceX is in a position to help fill the gap in American spaceflight to the International Space Station (ISS) when the Space Shuttle retires in 2010. Under the existing Agreement, SpaceX will conduct three flights of its Falcon 9 launch vehicle and Dragon spacecraft for NASA, culminating in Dragon berthing with the ISS. SpaceX is the only COTS contender with the capability to return cargo and crew to Earth. NASA also has an option to demonstrate crew services to the ISS using the Falcon 9 / Dragon system.

Founded in 2002, the SpaceX team now numbers more than 620 full time employees, located primarily in Hawthorne, California, with additional locations, including SpaceX's Texas Test Facility in McGregor near Waco; offices in Washington DC; and launch facilities at Cape Canaveral, Florida, and the Marshall Islands in the Central Pacific.

A new video tour of SpaceX’s Texas Test Site conducted by Tom Mueller, VP of Propulsion can be viewed here.