> Updating the Militarization and Annexation of North America - Freedoms Phoenix 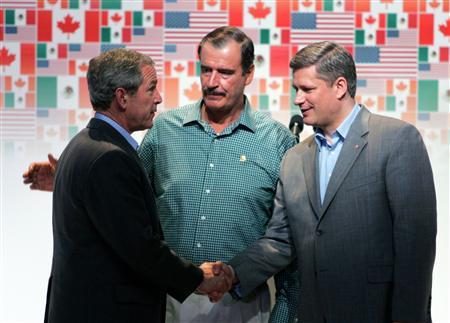 Updating the Militarization and Annexation of North America - by Stephen Lendman

The title refers to the Security and Prosperity Partnership of North America (SPP), also known as the North American Union - formerly launched at a March 23, 2005 Waco, Texas meeting attended by George Bush, Mexico's President Vincente Fox, and Canadian Prime Minister Paul Martin. It's for a tri-national agreement, below the radar, for greater economic, political, and security integration with secret business and government working groups devising binding policies with no public knowledge or legislative debate.

In short, it's a military-backed corporate coup d'etat against the sovereignty of three nations, their populations and legislative bodies. It's a dagger through the heart of democratic freedom in all three, yet the public is largely unaware of what's happening.

Last April, New Orleans hosted the last SPP summit. Ever since, progress may have stalled given the gravity of the global economic crisis and top priority need to address it. Nonetheless, what's known to date is updated below plus some related information.

Last September, the Army Times reported that the 3rd Infantry's 1st Brigade Combat Team in Iraq would be re-deployed at home (October 1) as "an on-call federal response force for natural or manmade emergencies and disasters, including terrorist attacks."

"This marks the first time an active unit has been given a dedicated assignment to NorthCom, a joint command established in 2002 to provide command and control for federal homeland defense efforts and coordinate defense support of civil authorities."

Then on December 1, the Washington Post reported that the Pentagon will deploy 20,000 troops nationwide by 2011 "to help state and local officials respond to a nuclear attack or other domestic catastrophe." Three "rapid-reaction" combat units are planned. Two or more others may follow. They'll be supplemented by 80 smaller National Guard units trained to respond to chemical, biological, radiological, nuclear, high-yield explosive, and other domestic "terror" attacks or disturbances. In other words, homeland militarization and occupation are planned using troops trained to kill.

The pretext is national security. In fact, they'll be on-call against another major terrorist attack, real or contrived, as well as civil unrest given the gravity of the economic crisis, its affect on millions, and likelihood that sooner or later they'll react. Armed combat troops will supplement militarized local police in case security crackdowns are ordered or martial law declared.

"Catastrophic Emergency" procedures are in place to react to situations, "natural or manmade," according to DHS/FEMA's March 2008 "Preparedness for the Next Catastrophic Disaster" policy paper. Should conditions warrant, initiatives to suspend the Constitution and declare martial law are in place, but militarizing America for business is also at issue.

Last October 1, the Canadian Action Party posted a "COUP IN USA ALERT" after the Bush administration announced the homeland deployment of troops with "$100 billion (bailout) dollars" to do it.

SPP efforts paused during the Bush to Obama transition, but "deep integration" plans remain. On January 19, Ottawa's Carleton University's Centre for Trade Policy and Law outlined an agenda for America and Canada going forward. It called for "early and sustained cooperation" at a time of continuing global crisis, to include security, defense, trade and competitiveness.

It said the "most pressing issue is the need to re-think the architecture for managing North America's common economic space (including) trade liberalization." It used language like "re-imagining (and) modernizing the border" that reads like erasing it and doing the same with Mexico. In a similar vein, it recommends "integrating national regulatory regimes into one that applies on both sides of the border." It called the arrival of a new Washington administration "a golden opportunity" to forge a "mutually beneficial agenda (that) will define global and North American governance for years to come."

It mentioned the specter of protectionism and need to avoid it given the current economic climate. It advocates a "more ambitious Canada-US Partnership" beyond NAFTA," in co-partnership with Mexico.

Both Carleton and Arizona State University project participants want SPP initiatives invigorated under a new Washington administration, especially in a climate of global economic crisis when addressing it takes precedence.

Other Issues in Play

"The Canadian's" Mike Finch "North American Union (NAU) watch" reports that US and Canadian organizations want to end free flow Internet information. He cites an "net-neutrality activist group" discovery of "plans for the demise of the free Internet by 2010 in Canada," and by 2012 globally.

Canada's two largest ISPs, Bell Canada and TELUS, are behind a scheme to limit browsing, block out sites, and charge fees on most others as part of a 2012 "planned full (NAU) launching." Web host I Power's Reese Leysen called it "beyond censorship: it is killing the biggest (ever) 'ecosystem' of free expression and freedom of speech." He cited big company inside sources providing information on "exclusivity deals between ISPs and big content providers (like TV studios and video game publishers) "to decide which sites will be in the standard package offered customers, leaving the rest of the Internet unreachable except for fees."

Leysen called his source "100% reliable" and cited similar information from a Dylan Pattyn Time magazine article, based on Bell Canada and TELUS sources. Plans are for "only the top 100 - 200 sites making the cut in the initial subscription package," likely to include major news outlets at the expense of smaller, alternative ones. "The Internet would become a playground for billion-dollar content providers," like cable TV providers, unless efforts are made to stop it.

Leysen thinks US and global ISPs have similar plans that include free speech restrictions and privacy invasions. The stakes are high if he's right. Yet the profit potential is huge and friendly governments may oblige. Also involved are "deceptive marketing and fear tactics" (like citing child pornography threats) to gain public approval for subscription services masquerading as online safety. The time to stop it is now.

Last March, Canada's Fraser Institute proposed it in an article titled: "Saving the North American Security and Prosperity Partnership" at a time of mounting criticism. It recommended discarding NAU in favor of the "North American Standards and Regulatory Area (NASRA)" to disguise its real purpose. It called the "SPP brand" tarnished so changing it was essential to continue where NAFTA left off by combining security with quality of life issues like food safety, global warming, climate change, and pandemic diseases. It also wants better communications to sell it to the public. Their idea is to fool most people until it's too late to matter.

Rumblings in America at the State Level

Running counter to "deep integration," News with Views (NWV) writer Jim Kouri headlined on February 23: "Individual States Declaring Sovereignty." He cites political strategist Mike Baker saying "Americans are becoming disenchanted with the federal government's lack of perspective on" matters like: "illegal aliens, crime, (and) economic turmoil - while intruding into the private lives of citizens with gun-control laws and other intrusions," issues our Founding Fathers "relegated to the individual states." Bothersome also are unfunded mandates that states can't handle given their over-stretched budgets and need to cut back. In addition, Washington's intrusion into local law enforcement is a big issue.

So far, nine states have declared sovereignty and another dozen or more are considering it. Enacted or proposed legislation varies from all states' rights to selective ones like gun control and abortion.

As of January 30, Washington State is one of the former under House and Senate bill HJM-4009 stating:

Besides states rights issues, driving the current movement are:

-- the grave and deteriorating economy;

-- its effects on checks and balances;

-- excessive bailouts for an insolvent and corrupted banking system at the expense of local state budgets and rights; and

-- reckless and unsustainable spending and national debt levels driving the nation to bankruptcy and placing untenable burdens on states.

Overall, concern is that Washington is complicit in driving the nation to ruin, and they want out or at least lean that way. If this movement gains strength, at the least it will slow "deep integration," stall it for a considerable time, but won't likely halt it. Corporate America wants it, and most often what it wants, it gets.

It may just take longer than planned, much longer given the gravity of the global crisis, how hard it will be to resolve, and how long doing it will take. Some experts predict another Great Depression as bad or worse than the first one and far worse than Japan's "lost decades" - from 1990 to the present.

Top priority in world capitals and corporate boardrooms is preventing it if possible. Except for "national security," other initiatives are secondary.

Also visit his blog site at sjlendman.blogspot.com and listen to The Global Research News Hour on RepublicBroadcasting.org Monday through Friday at 10AM US Central time for cutting-edge discussions with distinguished guests on world and national issues. All programs are archived for easy listening.

With a little luck, America may surprise you. Mr. Lendman.
I sure as hell hope so.

The Impeachment Show: Asking All the Wrong Questions on Ukraine

Come Home, America: Stop Policing the Globe and Put an End to Wars-Without-End

Plutocrats Laughing at the Plebes