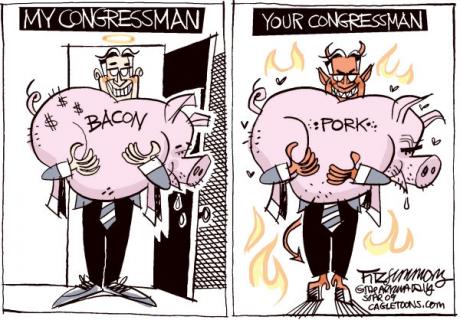 by Ron Paul
Earmarks seem to be the hot topic this week, and as a fiscal conservative I am dismayed so many people deliberately distort the earmarking process and grandstand to make political points.  It is an easy thing to do with earmarks.  It takes a little more time and patience to grasp the reality of what earmarks really are.

To be sure, if earmarks were the driving force behind explosive government spending as some have been led to believe, that would be a good reason for all the fuss.  The misconception seems to be that members of Congress put together a bunch of requests for project funding, add them all together and come up with a budget.  The truth is, it is not done that way.  The total level of spending is determined by the Congressional leadership and the appropriators before any Member has a chance to offer any amendments.  Members’ requests are simply recommendations to allocate parts of that spending for certain items in that members’ district or state.  If funds are not designated, they revert to non-designated spending controlled by bureaucrats in the executive branch.   In other words, when a designation request makes it into the budget, it subtracts funds out of what is available to the executive branch and bureaucrats in various departments, and targets it for projects that the people and their representatives request in their districts.  If a congressman does not submit funding requests for his district the money is simply spent elsewhere.  To eliminate all earmarks would be to further consolidate power in the already dominant executive branch and not save a penny.

Furthermore, designating how money is spent provides a level of transparency and accountability over taxpayer dollars that we don’t have with general funds.  I argue that all spending should be decided by Congress so that we at least know where the money goes.  This has been a major problem with TARP funding.  The public and Congress are now trying to find out where all that money went.

The real issue is that the overall budget is too big, by far, which is why I always vote against it.  But attacking the what was earmarked solves nothing.  The whole issue is a distraction from the real problems we face, which are that the Federal Government will absorb over 1/3 of our country’s GDP this year and taxpayers are forced to fork over more than half their income to fund government at all levels.  On top of that, the national debt is $11 trillion, which is $36,000 per citizen.  The recent increases in bailouts, government spending and money creation is going to hobble our economy for decades.  We must curb the government’s appetite severely if this country is ever to thrive again.  The noise over “earmarks” is a red herring and a distraction from the real issue of uncommitted spending.

It is time to attack the entirety of government spending.  We especially need a full account of the activities of the Federal Reserve that spends and creates trillions of dollars with no meaningful oversight.  This is a huge problem that needs immediate attention.
source

Congress Makes Shocking Move To Strip Trump Of THIS POWER! What Next?

Ernest Hancock the History of a Politician Getting Shot in Arizona