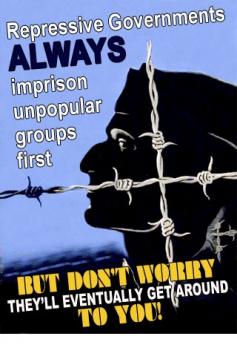 In February 2007, it was learned that Washington had a secret new facility for so-called "high-security risk" Muslim and Middle Eastern prisoners in violation of federal law that prohibits severely limiting or cutting them off entirely from other inmates as well as outside contacts and communications. Segregating prisoners by race, national origin, or language violates the Supreme Court's February 2005 decision in Johnson v. California that affirmed 14th Amendment protection against racial discrimination. Specifically, the Court:

"rejected the notion that separate can ever be equal-or 'neutral' - 50 years ago in Brown v. Board of Education (this Court repudiated it and) refuses to resurrect it today."

US Prison Bureau regulations also stipulate that "staff shall not discriminate against inmates on the basis of race, religion, national origin, sex, disability, or political belief (including) administrative decisions (involving) access to work, housing and programs." Nonetheless, the Bush administration instituted these practices, and they continue under Barack Obama at the Terre Haute federal prison's Communications Management Unit (CMU). Perhaps at other federal and state facilities as well at a time Muslims are vilified and persecuted.

September 11, 2001 events unleashed a torrent of fear, repression, and a war on Islam, henceforth targeting innocent Muslims as terrorists, Islamofascists, and criminals for their faith, ethnicity, prominence, and/or charity.

Ever since, numerous innocent men and some women have suffered grievously. Besides "unlawful enemy combatants" in global "torture prisons," they've been unfairly harassed, arrested, prosecuted, and interned as political prisoners for being Muslims at the wrong time in America. Most end up in federal facilities like the CMU at the Federal Correctional Institution (FCI), Terre Haute, Indiana, established to segregate and discriminate against Muslims and Middle Eastern internees.

Treatment thereafter has been demeaning, unpleasant, and in violation of US Prison Regulations covering normal day-to-day operations. For example, punishment may be ordered for any reason, or none at all. Communications by phone, mail, email, and visitations are monitored and must be in English. The latter, when allowed, are non-contact only. CMU prisoners get an "Institution Supplement" stating that "all contact" between inmates, "persons in the community," or anyone outside it, is restricted and only permissible "according to national policy."

It's so Muslims get fewer rights and privileges than others, including allowable communications. Also:

-- food quality, amount, and that conforms to a strict Muslim diet;

-- virtually everything else with prison authorities given much latitude to do as they please.

Early reports were that prison staff were struggling to understand the new rules and make sense of how to apply them. So at first, though segregated and denied privacy, Muslims were mostly treated like other inmates, including allowed free religious practice and a permissible diet.

Recently that changed, and below are some of the ways:

-- food quality has deteriorated; at times it's rotten and inedible; the amount has been reduced, and strict religious diet restrictions aren't being observed;

-- commissary prices have risen sharply, way above the allowed markup;

-- emergency medical care takes days to get; less urgent but needed care takes weeks or months, and inmates aren't informed of any problems;

-- the entire CMU is monitored with cameras and listening devices; privacy is impossible, even for the most personal and intimate things;

-- mistreatment and disrespect are increasing;

-- prisoner written complaints have risen from very few at first to many about virtually everything;

-- retaliation follows through harassment, intimidation, food rationing, the serving of forbidden-to-eat kinds, frequent "shake-downs" and removal or theft of personal possessions; rejection of simple requests; delay or denial of mail and other communications; and whatever else prison authorities decide ad hoc;

-- CMU tap water is inferior to the rest of the prison; it contains sediment, causing itching after showering, hair loss, and kidney stones in several prisoners;

-- except for poor quality salad and some fruit, all food is processed, never fresh; and

Given how conditions have deteriorated, prisoners have reason to worry. A new administration is in charge. It vowed to close Guantanamo and end torture. Yet CMU conditions are worse and unaddressed by an uncaring government, no different under Obama than George Bush. It's the wrong time to be Muslim in America.

The "war on terror" continues, yet who but family members, if they're lucky, know how their loved ones are treated - innocent men, some women, targeted for their faith, ethnicity, prominence and charity. This is how America treats the vulnerable - with contempt and disregard for the law. It's vital to denounce it at a time we're all equally at risk.

Stephen Lendman is a Research Associate of the Center for Research on Globalization. He lives in Chicago and can be reached at lendmanstephen@sbcglobal.net.

Also visit his blog site at sjlendman.blogspot.com and listen to The Global Research News Hour on RepublicBroadcasting.org Monday through Friday at 10AM US Central time for cutting-edge discussions with distinguished guests on world and national issues. All programs are archived for easy listening.

"A Black And Shamefull Record"