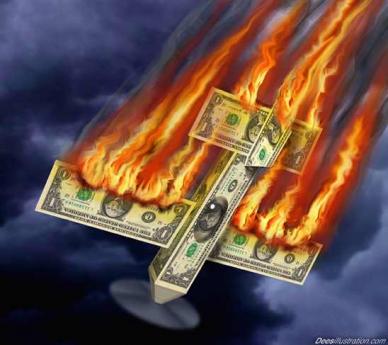 (A personal email from John)

Heidi is the proprietor of a bar in Berlin.   In order to increase sales, she decides to allow her loyal customers - most of whom are unemployed alcoholics - to drink now but pay later.   She keeps track of the drinks consumed on a ledger (thereby granting the customers loans).

Word gets around and as a result increasing numbers of customers flood into Heidi's bar.

Taking advantage of her customers' freedom from immediate payment constraints, Heidi increases her prices for wine and beer, the most-consumed beverages.   Her sales volume increases massively.

He sees no reason for undue concern since he has the debts of the alcoholics as collateral.

At the bank's corporate headquarters, expert bankers transform these customer assets into DRINKBONDS, ALKBONDS and PUKEBONDS.   These securities are then traded on markets worldwide.   No one really understands what these abbreviations mean or how the securities are guaranteed.   Nevertheless, speculators cause the prices to continuously climb, the securities become top-selling items.  Headquarters uses their profits to get people of like mind elected to office.

Eventually, although the bond prices are still climbing, a risk manager of the local bank, (of course he is subsequently fired due his negativity),  decides that the time has come to demand payment of the debts incurred by the drinkers at Heidi's bar.

However the patrons cannot pay back the debts.

DRINKBOND and ALKBOND drop in price by 95 %.  PUKEBOND performs better, stabilizing in price after dropping by 80 %.

The suppliers of Heidi's bar, having granted her generous payment due dates and having invested in the securities are faced with the new situation.
Her wine supplier claims bankruptcy, her beer supplier is taken over by a competitor.

The bank is saved by the Government following dramatic round-the-clock consultations by leaders from the governing political parties whom the headquarters bank now owns.

The funds required for this purpose are obtained by a tax levied on the non-drinkers.


Finally an explanation I understand.

FDA HIDES DOCUMENTS ABOUT WEED KILLER IN VACCINES -- NOW WHY WOULD THEY DO THAT?

Covid cases have dropped 77% in six weeks. Experts should level with the public about the good news

WHOA! Maxwell ADMITTED They're On Tape!

The Covid Scamdemic: A Blatant and Obvious Fraud - The Crow House

COVID: The predatory testing labs are complicit in the crime