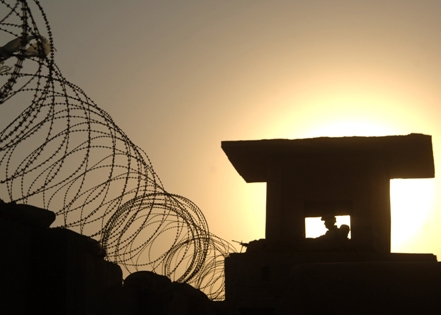 Iraq Veterans Against the War Commence “OPERATION NOT CHANGE”
Iraq and Afghanistan veterans begin a tower-guard vigil across from
the White House. The towers will be manned 24 hours a day March 19th to March 21st, Saturday. (All are welcome to come speak to the vets on post and ask questions about their deployments.)

WHERE: Constitution Avenue between 15th and 17th Streets, North of the
Washington Monument

WHY: To protest President Obama's deceptions about his foreign policy
and mark the sixth year anniversary of the invasion of Iraq.

Adam Kokesh: (505) 470-1917 adam.kokesh@gmail.com. IVAW board member
who served in Fallujah with a Marine Corps Civil Affairs team.
“Relabeling the remaining forces in Iraq 'non-combat troops' will not
change the fact that these occupations are being perpetuated to
maintain a criminal empire.”

James Circello: (419) 905-8305. ANSWER organizer, former Airborne
soldier, Iraq veteran, and Afghanistan war resister. “President Bush
would often boast that, under his watch, the United States hadn't been
attacked since September 11, but the working class has been attacked
every day since.”

James Gilligan: (267) 506-1495 gilligan007@gmail.com, Served with the
USMC in Iraq, Afghanistan, and Guantanamo. “The backlash of the
actions by both administrations, of pursuing the enemy outside of the
combat regions will only spread the violence further.

Bryan Casler: (315) 877-3420 bryancasler@rochesterivaw.org. Deployed
three times in his four years with the United States Marine Corps as
an Infantry man, including a tour to Kabul, Afghanistan. “No matter
how Obama spins a surge into Afghanistan, it's still a criminal
occupation and we don't want it.”

Washington's Energetic Generals and the Emphasis on Preparation for Nuclear War

WOW! This Is A Wild Situation!