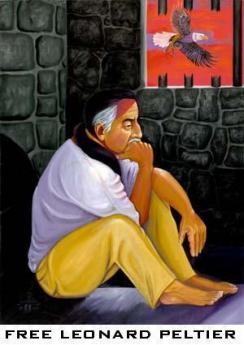 As of 3/19/20, Wowagha (Blue Thunder Man) heard that "Leonard Peltier who has been in prison 30 years for crimes he did not commit, was transferred from Lewisburg Federal Prison to Cannan Pen supposedly to get Leonard ready for a Parole hearing. While there he was beat up to within an inch of his life. Evidently prisoners who have been caught in fights will not be considered for parole. The thought is that the FBI paid prisoners in the latter facility to so that. Peltier was transferred back to Lewisburg where he is "under the protection" of those inmates. As you may know Leonard has been ill some time with cancer."
This comes from a tradition where oral reporting is considered very, very reliable. It's well known that Leonard remains on the list of high enemies of corrupt factions in the FBI and other federal agencies who have preyed upon native people for a long, long time.
Many people in Native America will never forgive Bill Clinton for promising to personally review the facts in Leonard's case, a fact he will (and has) denied to this day, but we heard him promise with our own ears. And as well as being reliable in this sort of thing, we never forget either.
For many of us becoming familiar with an increasingly militarized police presence and their departure from old-school "community relations" techniques in favor of "pain compliance" and threats, we know well the pattern where police brutalize a member of the public, then charge their victim with assault. For those of us familiar with the increasingly punitive and homicidal correctional system, we know that Corrections Officers (CO's) in many of these institutions use violent prisoners as their proxies to do these evil deeds.
As often in FreedomsPhoenix and other patriot articles, we morn the stigma this attaches to all "Oath Keepers" everywhere, but in light of the patterns of abuse, I iterate my position: clean up your self, your shop and keep it clean.
Wowaga concludes "If Leonard is not already on your prayer list please consider putting him in your personal protection. I ask this not for myself, but for Leonard and his Tiyospaye, and all my relatives!"
For the many new people in the movement, it's important you familiarize yourself with the case of Leonard Peltier, the Second Wounded Knee uprising and the American Indian Movement (AIM). It was foretold that the fate of the children of the settlers would be the same of the native children one day. Understanding how other cultures have found resistance and cultural preservation is very important to you.
And no matter what your belief or heritage, your prayers always make a difference.
Hau, Oyasin