This is NOT anti-cop...this video is pro-peace officer. I was filming two cops who work for the corporation called CITY OF MESA.
They looked to be eating in the park but were NOT sitting at a pinic table or on a park bench. They did however decide to drive their cars on the park grass and then chitchat with each other.
CLICK HERE TO WATCH THE VIDEO! 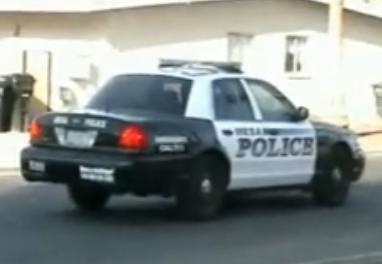 To be honest every time they do crap like this they lose creditability with the everyday folk.
Whether they believe it or not the public gets pissed when they drive by and witness what is "perceived" to be two cops shooting the breeze Why? Because they know if they were to drive their cars on the park grass they would be escorted off the property, fined and/or possibly arrested.
The officers have two feet and if they would like to patrol the park they might try utilizing them by getting out of their vehicles.
Unless the police are in pursuit of a "criminal" [empasis added] they should not be running amuck on the taxpayers park lawn.
By the way when I say "criminal" [empasis added] this does not mean a 16 year old skateboarder or kids who fight over a kick ball or the old "Were looking for a runaway and you match the description" story.