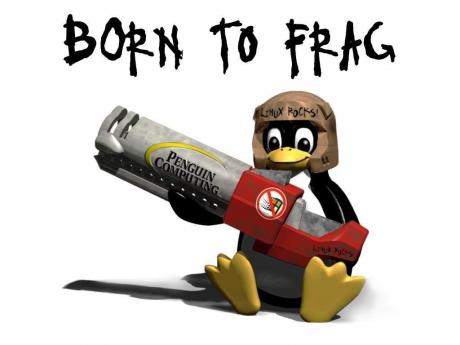 An essential conflict.
In a rare and stunning announcement today, millions of Linux users have expressed their profound disgust with contemporary life on planet Earth and intend to take themselves and their profoundly efficient operating system with them. "Well continue to make fun of our inept users for about three months more and then the show is going extra-terrestrial" said Tinus Lorvalds, the ostensible head of the technology-cum-cult that has revolutionized e-commerce and personal computing.
We thought we were all getting laid.
"Dude it was like, at MIT, we are all getting laid virtually but we actually had girlfriends in real life" reminisced a Linux geek I recently interviewed. "But it was like one day I reached for my peanut butter sandwich and it wasn't there" explained the geek. "And then when my hands reached my Shasta bottle, it was empty" he continued. "That's when I realized I might have a problem" the geek surmised.
Indeed, the growing movement of geeks who feel like real life doesn't give them what they want, exactly when they want it is growing. "The internet is great" said one porn connessuire who chose to remain nameless for this interview, "but it doesn't make you pizza" he said.
The inevitable disillusionment.
Industry experts were quick to point out the many flaws in open-source software. "When they gave away free porn to everybody that kind of knocked out the knees of the entertainment industry" said one Hollywood executive who chose to remain nameless. "And some of it is really kickass porn too" he added.
The equally inevitable retreat into self-pity and scorn.
Whatever the speculation, people all over the world still ponder the significance of the phrase "we sick as shit of you assholes complaining every time we give you free software so we're going to Mars and you can all suck our empty Shasta cans". The missive also contained references to "we never needed your stinking oxygen anyway" and "hot girls in your town want to party naked with you tonight".
Official representatives for the open source movement could not be further identified, but one gnarly surfer dude I encountered said "It's pretty much because you guys suck bong water dude and I can kill you at World Of Warcraft".
The equally meaningless wrap-up.
This is Oyate reporting live in another segment of our new show, "Patriot Shopper On The Streets". This world-wide popular broadcast is available for syndication at YouHaveGotToBeFreakingKiddingMe.com and on shortwave and 6.66 megapants from Sunday to the day before that, only on weekdays!

1 Comments in Response to Millions of Linux users disgusted, vow to leave Earth

I often make the point that, if you are offended by South Park you are the person that Matt and Trey are making fun of.

Despite my offense (and dangling preposition), I take solace in the fact that your Windoze was unable to correct your grammatical mistakes even with spell check. Oh, and if you're looking for a good WoW experience, stay far clear of linux. Stick with Windoze.

How To Go Completely KETO

Why AOC Exaggerated Her Trauma From the Capitol Riot?

You'll Own Nothing and Be Happy!? - The Great Reset