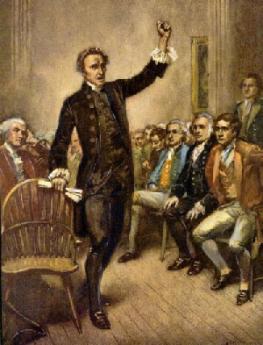 The event has been made very pleasant by Bob Schultz and supporters of his group ‘We the People’. Every gathering features costumed actors that recreate events and speeches of the revolution that are part of an over all effort to create an atmosphere of patriotism, nationalism and nostalgia. While soothing to many, I am not alone in the concern that critical thinking and examination of what is possible today has been ignored or avoided with the overwhelming distraction of what was.

New technologies and the hundreds of years of experience from the great ‘American experiment’ has yet to be a subject of discussion. Each speech and presentation is in support of a predetermined outcome to push the ‘reset’ button on the Republic.

The constant linking of the Declaration of Independence and the united States Constitution is tolerated by most in the spirit of the gathering of 60-70 people.

One event ended with the signing of a “Dedication Scroll” to “dedicate and consecrate our lives” to the defense of the US Constitution. The document was not long, but it as is often the case, it linked the Declaration of Independence, the US Constitution and the Bill of Rights into one document while “reaffirming our devotion to the Love of God and Country, the Cause of Liberty and the Brotherhood of Man, and to the Union.” This particular event encapsulated what I feared most about this week’s gathering. The outcome was predetermined. Any discussion about a better Constitution or none at all would not be an option for a future Continental Congress.

“Give me Liberty or Give me Death” by Patrick Henry was well delivered by a costumed gentleman, but the mention of Patrick Henry’s opposition to the US Constitution, and his reasoning (that lead to the adoption of the Bill of Rights) was avoided. The Anti-Federalist (libertarians of the day) were very accurate in their predictions of how the Washington, D.C. collective would be used to trample the rights of the people and have it ruled “constitutional”.

Just before time ran out for the day it was my turn to address the gathering for a few minutes. I’m sure the video will eventually be posted here as it becomes available. You’ll find that my comments were well received and prompted a great deal of discussion that would continue through the night but did not have a negative effect on the enjoyment of the rest of the dinner activities. I kept it light and enjoyable, but I did make it clear that the next generation of r3VOLutionaries might like a say in how they and their children would like to be governed,… or even not ‘governed’ at all.

Bob Schultz knew my mind, as did many others in attendance, and to their credit I was welcome to speak my mind.

Oh,… No, I did not sign the ‘Dedication Scroll’ or participate in that particular Photo Opportunity (several others didn’t sign either).

I look forward to another day with old and new friends and what questions and comments I might have inspired with an alternative perspective.

I’ll do my best to load and post some short video clips with commentary after returning to the train on our way back to our homes.

if its not on Youtube it did not happen!

Vote For the Collective its so much fun!

I had great hopes something provocative was going to come out of this, but after reading this article.... I have my doubts

Well there you go. I think we'd be scared stiff to call a real Con Conv. because we know the revisionists are way stronger than we are politically.

Quite, right, Jet Lacey! While we certainly need to "turn the tide" of the tyranny that has proceeded from the "living" Constitution agenda, merely hitting the "reset button" to restore the original documet's authority will not be enough. We must learn and APPLY the lessons learned from over 200 years of American history. We must return to the PRINCIPLES of the Declaration of Independence. We must not only vanquish the statist beasts, we must make certain they never rise again. We must recall the SPIRIT of '76!!!

With history as an omnipresent reminder, Bob Schulz and those dedicated to We the People Foundation should realize that societies can never go backward. It is simply not possible. As with many facets of societal life, we can either learn from our collective failures (and successes for that matter) or we are sure to repeat the myriad mistakes of the past.

In my overly simplified opinion, the general tenets one must give serious consideration to before undertaking an effort to change society as a whole is understanding the rudiments of human nature as well as the foundation of Piaget's stages and their relationship to group dynamics.

It seems, by your reporting, that they are overlooking these. I do however, appreciate Bob Schulz and his efforts for liberty.