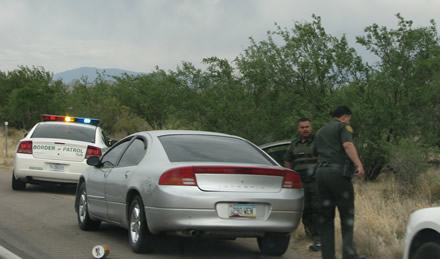 In followup to my May 2008 blog entry regarding two Border Patrol agents retaliated against for whistle blowing, the agents have been fully reinstated by the agency.

Problems for the agents started in late 2006 when the ex-wife of one of the agents, along with his minor children, were stopped by a Border Patrol roving patrol near Rodeo, new Mexico. During the stop, agents searched the vehicle and found marijuana. Agent Curbelo's ex-wife was arrested and his children detained.

When Agent Curbelo reviewed the incident report, he noted several discrepancies that indicated the stopping agent had falsified the reason for the stop in order to claim the presence of reasonable suspicion to justify it after the fact. Agent Curbelo testified this was a common practice within the Border Patrol known as 'shotgunning traffic'. The practice is illegal because the Supreme Court has explicitly ruled in U.S. v Brignoni-Ponce that agents on roving patrol must have reasonable suspicion to believe a vehicle contains illegal aliens in order to conduct a traffic stop away from the border or its functional equivalent.

The agents initially brought their concerns forward to their superiors and the Office of Inspector General. Instead of investigating the complaints, the agents were told they were jeopardizing their careers. Nonetheless, the agents persisted and testified during legal proceedings regarding the illegal traffic stopping practice and the falsified report. In response, the court threw out the charges against the agent's ex-wife. The agency however retaliated by removing the agent's enforcement authority and delegating them to fence building duty along the border.

The agent's sought redress for the retaliation and enlisted the aid of the ACLU. In response, the ACLU of New Mexico filed a civil lawsuit in federal court on behalf of the agents last year. In the press release reprinted below, the ACLU reports that litigation was dropped after the agency fully reinstated both agents to their regular job duties earlier this year.

On a side note, while I applaud the agent's willingness to come forward regarding their information on illegal Border Patrol enforcement practices, it's a shame they waited until a family member was caught up in the Border Patrol's unconstitutional enforcement web before doing so. This also shows the Border Patrol is more than willing to violate the rights of its own agents when it thinks it can get away with it.

Border Patrol Supervisors Back to Work

"We’re delighted our clients got the relief they wanted and deserved: full restoration of their job duties,” said Peter Simonson, executive director of the ACLU of New Mexico. “Agents Curbelo and Leafstone rightfully spoke up against stopping vehicles without reasonable suspicion. This lawsuit brought to light that the practice of ‘shotgunning traffic’ is clearly unconstitutional.”

In December 2006, Curbelo’s ex-wife, Concepcion Curbelo, and his children were stopped by a Border Patrol agent during a “shotgunning” patrol near Rodeo, New Mexico. The agent arrested Ms. Curbelo for allegedly possessing and trafficking marijuana, and took her to the Border Patrol station in Lordsburg. A short time later, agent Curbelo received a copy of the incident report regarding his ex-wife’s arrest. Both he and Agent Leafstone noted inconsistencies in the report that, they concluded, were intended to cover up the fact that Ms. Curbelo was stopped without reasonable suspicion. A federal judge in New Mexico agreed and suppressed the evidence against Ms. Curbelo.

Agent Curbelo reported his concerns to the Office of the Inspector General, in January 2007. Agent Leafstone testified at Ms. Curbelo’s hearing regarding the practice of “shotgunning traffic.” The Border Patrol subsequently removed their badges and placed them on administrative duties. After initially receiving a notice that they might be terminated, the Agents ultimately received only minor disciplinary actions and then were fully restored to their jobs this week by their Chief.

The ACLU lawsuit was filed by Staff Attorney George Bach (ACLU-NM) and co-counsel Dan Pochoda (ACLU-AZ) on May 21, 2008 in U.S. District Court in Tucson, Arizona.

As additional proof that Homeland Security roving patrols do indeed routinely conduct traffic stops absent reasonable suspicion inside the country, I offer the video below of my own experience with just such a roving patrol.

I was going to make a similar note regarding taking care of a family member, but it is nice that this "shotgunning" is now on the record as BP SOP.