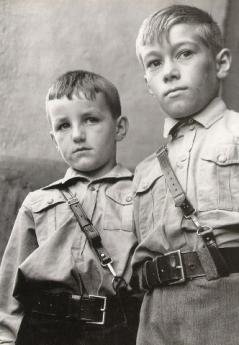 On June 7, 1995, the Washington Times printed a letter to the editor from a man named Thomas Colton Ruthford in which he described the Nazis and how Hitler came to power and then abused that power. In light of current events, this letter could be quite chilling. There are those who say that "Those who will not learn from history are doomed to repeat it," but I would like to modify that and say that, "The only lesson we learn from history is that we don't learn from history."


Letter to the Editor

During the past several months in the American press, the Democrats have frequently denounced the Republicans as Nazis due to their attempts to control runaway federal spending. How very ironic. I remember the Nazis. Let me share a little about them and recall some of their exploits.

First of all, "Nazi" was gutter slang for the verb "to nationalize". The Bider-Mienhoff gang gave themselves this moniker during their early struggles. The official title of the Nazi Party was "The National Socialist Workers Party of Germany". Hitler and the Brownshirts advocated the nationalization of education, health care, transportation, national resources, manufacturing, distribution and law enforcement.

Hitler came to power by turning the working class, unemployed, and academic elite against the conservative republic. After der fuhrer's election ceased being a political conspiracy and was transformed into a fashionable social phenomenon, party membership was especially popular with educators, bureaucrats, and the press. Being a Nazi was politically correct. They called themselves "The Children of the New Age of World Order" and looked down their noses at everyone else. As Hitler accrued more power, he referred to his critics as "The Dark Forces of Anarchy and Hatred". Anyone who questioned Nazi high-handedness in the German press was branded a "Conservative Reactionary". Joseph Goebbels, minister of communications, proclaimed a "New World Order".

The Nazi reign of terror began with false news reports on the Jews, Bohemians and Gypses who were said to be arming themselves to overthrow the "New World Order" and Hitler demanded that all good people register their guns so that they wouldn't fall into the hands of "terrorists and madmen". Right wing fanatics of the "Old Order" who protested firearms registration were arrested by the S.S. and put in jail for "fomenting hatred against the Government of the German people".

Then the Reichstag (government building) was blown up and Hitler ram-rodded an "Emergency Anti-Terrorist Act" through Parliament that gave the Gestapo extraordinary powers. The leader then declared that for the well-being of the German people, all private firearms were to be confiscated by the Gestapo and the Wermotten (federal law enforcement and military). German citizens who refused to surrender their guns when the "jack-boots" (Gestapo) came calling, were murdered in their homes. By the way, the Gestapo were the federal marshals' service of the Third Reich. The S.W.A.T. team was invented and perfected by the Gestapo to break into the homes of the enemies of the German people.

When the Policia Bewakken, or local police, refused to take away guns from townsfolk, they themselves were disarmed and dragged out into the street and shot to death by the S.A. and the S.S. Those were Nazi versions of the B.A.T.F. and the F.B.I. When several local ministers spoke out against these atrocities, they were imprisoned and never seen again.

The Gestapo began to confiscate and seize the homes, businesses, bank accounts, and personal belongings of wealthy conservative citizens who had prospered in the old Republic. Pamphleteers who urged revolt against the Nazis were shot on site by national law enforcement and the military. Gypsies and Jews were detained and sent to labor camps. Mountain roads throughout central Europe were closed to prevent the escape of fugitives into the wilderness, and to prevent the movement and concealment of partisan resistance fighters.

Public schools rewrote history and Hitler youth groups taught the children to report their parents to their teachers for anti-Nazi remarks. Such parents disappeared. Pagan animism became the state religion of the Third Reich and Christians were widely condemned as "right wing fanatics".

Millions of books were burned first and then people. Millions of them burned in huge ovens after they were first gassed to death. Unmarried women were paid large sums of money to have babies out of wedlock and then given medals for it. Evil was declared as being good, and good was condemned as being evil. World Order was coming and the German people were going to be the "peacekeepers".

Yes, indeed, I remember the Nazis and they weren't Republicans, or "right wing", or "patriots" or "militias". They were Socialist monsters.

and HERR OBAMA and his happy band of COMMUNIST, MARXIST, SOCIALIST are DOING the SAMETHING HITLER DID.

we can NOT give up our ARMS folks.

to do so will be a CRIME AGAINST HUMANITY.

Bill Gates and the End of America