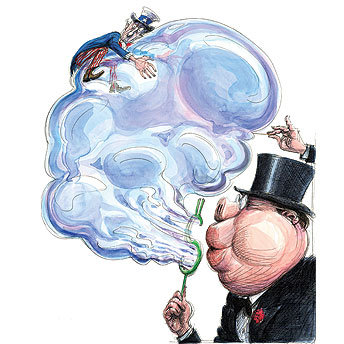 From tech stocks to high gas prices, Goldman Sachs has engineered every major market manipulation since the Great Depression - and they're about to do it again

The first thing you need to know about Goldman Sachs is that it's everywhere. The world's most powerful investment bank is a great vampire squid wrapped around the face of humanity, relentlessly jamming its blood funnel into anything that smells like money. In fact, the history of the recent financial crisis, which doubles as a history of the rapid decline and fall of the suddenly swindled dry American empire, reads like a Who's Who of Goldman Sachs graduates.

By now, most of us know the major players. As George Bush's last Treasury secretary, former Goldman CEO Henry Paulson was the architect of the bailout, a suspiciously self-serving plan to funnel trillions of Your Dollars to a handful of his old friends on Wall Street. Robert Rubin, Bill Clinton's former Treasury secretary, spent 26 years at Goldman before becoming chairman of Citigroup — which in turn got a $300 billion taxpayer bailout from Paulson. There's John Thain, the asshole chief of Merrill Lynch who bought an $87,000 area rug for his office as his company was imploding; a former Goldman banker, Thain enjoyed a multi-billion-dollar handout from Paulson, who used billions in taxpayer funds to help Bank of America rescue Thain's sorry company. And Robert Steel, the former Goldmanite head of Wachovia, scored himself and his fellow executives $225 million in golden parachute payments as his bank was self-destructing. There's Joshua Bolten, Bush's chief of staff during the bailout, and Mark Patterson, the current Treasury chief of staff, who was a Goldman lobbyist just a year ago, and Ed Liddy, the former Goldman director whom Paulson put in charge of bailed-out insurance giant AIG, which forked over $13 billion to Goldman after Liddy came on board. The heads of the Canadian and Italian national banks are Goldman alums, as is the head of the World Bank, the head of the New York Stock Exchange, the last two heads of the Federal Reserve Bank of New York — which, incidentally, is now in charge of overseeing Goldman — not to mention …

But then, any attempt to construct a narrative around all the former Goldmanites in influential positions quickly becomes an absurd and pointless exercise, like trying to make a list of everything. What you need to know is the big picture: If America is circling the drain, Goldman Sachs has found a way to be that drain — an extremely unfortunate loophole in the system of Western democratic capitalism, which never foresaw that in a society governed passively by free markets and free elections, organized greed always defeats disorganized democracy.

The bank's unprecedented reach and power have enabled it to turn all of America into a giant pump-and-dump scam, manipulating whole economic sectors for years at a time, moving the dice game as this or that market collapses, and all the time gorging itself on the unseen costs that are breaking families everywhere — high gas prices, rising consumer-credit rates, half-eaten pension funds, mass layoffs, future taxes to pay off bailouts. All that money that you're losing, it's going somewhere, and in both a literal and a figurative sense, Goldman Sachs is where it's going: The bank is a huge, highly sophisticated engine for converting the useful, deployed wealth of society into the least useful, most wasteful and insoluble substance on Earth — pure profit for rich individuals.

They achieve this using the same playbook over and over again. The formula is relatively simple: Goldman positions itself in the middle of a speculative bubble, selling investments they know are crap. Then they hoover up vast sums from the middle and lower floors of society with the aid of a crippled and corrupt state that allows it to rewrite the rules in exchange for the relative pennies the bank throws at political patronage. Finally, when it all goes bust, leaving millions of ordinary citizens broke and starving, they begin the entire process over again, riding in to rescue us all by lending us back our own money at interest, selling themselves as men above greed, just a bunch of really smart guys keeping the wheels greased. They've been pulling this same stunt over and over since the 1920s — and now they're preparing to do it again, creating what may be the biggest and most audacious bubble yet.

If you want to understand how we got into this financial crisis, you have to first understand where all the money went — and in order to understand that, you need to understand what Goldman has already gotten away with. It is a history exactly five bubbles long — including last year's strange and seemingly inexplicable spike in the price of oil. There were a lot of losers in each of those bubbles, and in the bailout that followed. But Goldman wasn't one of them.

1 Comments in Response to The Great American Bubble Machine

"The bailout" a short term for "the largest transfer of wealth from the working class to the ruling elite in the history of mankind" - In other words, boyz & guls, we've been had, we've been bamboozled!