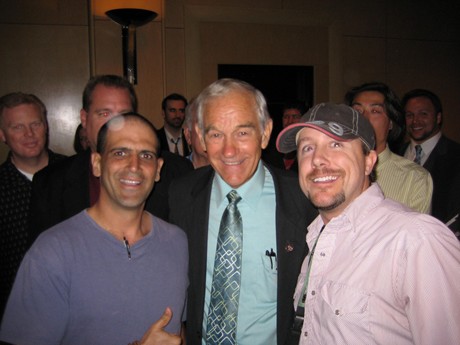 Ron Paul: Keynes. Keynes did it because he came into vogue into the 1920s and the 1930s and believe believed it and they’ve been living by this and Nixon put the rubber stamp on for all Republicans, “We’re all Keynesians now, we all have been, we believe in deficit financing, printing press money,” and that created the bubble. So it’s an intellectual fight. Keynes has lost this and people are starting to recognize that the system doesn’t work. So now the underground thought process right now… the thinking goes now on the Internet and elsewhere is Austrian economics. They have the answers to our problems.
Aaron Task: Right, but it seems that Keynes is making a comeback, at least here in Washington DC more recently.
Ron Paul: That’s the last hurrah, it’s not working, that’s like saying, “Well we’ve had these two stimulus packages, that’s all Keynes. We need one more.” People are laughing at that.
Aaron Task: What is your sense of the political appetite right now for another stimulus package? Do you think we’re going to see the Democrats try?
Ron Paul: Yea, they will and it might get passed and it might be passed and they’ll probably wait till next month when the economy has a few more bad statistics and unemployment’s 11%, and they will frantically pass more money and continue to do the things that created the problem in the first place.

3 Comments in Response to What would Ron Paul do?

Dr. Ronald Ernest Paul is the ONLY Congressman that uses his HEAD for something more than just a hat rack.

"Guns are like Condoms.  It's better to have one just in case you need it"

ONLY Doctors WILL HEAL the USA