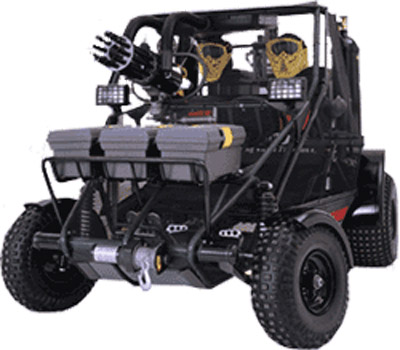 The following is a rare transcript of a real-live militia which is active in Northern Arizona. While it was impossible to obtain video documentation as indicated within this transcript, an audio-only version is currently being vetted by DHS and other security agencies. It offers a candid glimpse into the inner workings of the modern day Militia Movement. The speaker is believed to be the terrorist leader "Oyate". In this we clearly see how motivated, how desperately deranged these people are and the real level of organization and infrastructure they have achieved. Forward this link to all your friends so people see what a real and potential threat these people represent to our society. ---Begin Transcript---

OK, folks, settle down. Jeremiah, I don't want you and your boys sulking in back, I have special chairs for you right here up front. Come on, hustle soldiers. Now tonight, the coffee and donuts are courtesy of Joe and Marybeth. That's why I sat Jeremiah and his faction up front because last time they hogged up all the donuts and the people who came late didn't get any. One donut apiece if you please. Seroiusly, just because you can eat more than one donut doesn't mean you should.

OK, on to business. First of all, we don't mind if you bring beer to the secret hideout here but you have to remove all your own beer cans. We're in here doing phone work during the day and in the middle of an important call an avalanche occurs. Don't think the people we do business with don't know what empty beer cans rattling around sound like. It's freaking embarrassing is what it is. We really need to be taken seriously and this isn't helping.

Moving on, I understand some of you aren't satisfied with the quality of the equipment we've been getting from the back pages of Boy's Life Magazine and you really could have listened. Did you really think you can get x-ray specs for under $5? Unfortunately, due to our highly covert nature, we cannot call customer service for a refund, we're just going to have to eat it. So that leaves our wish list including real x-ray specs as well as Hellfire, Stinger and Sunburn missile systems, we could still get some Katyushas while prices are still low, we all need better rifles, chemical weapons and you know, the usual stuff.

A tank would be nice but I don't want to open up old wounds. I was against it when you guys took the chassis of our stealth-tank project and turned it into a hayride for last year's Veteran's Day parade and while I'll allow it was fun for the kids and all, what did it get us? Those screwballs over at Allen Chevrolet took first prize for best float like they do every year. I really don't know why we bother. I'm just saying we could get better at fund raising than the usual bake sales and car washes. These state of the art offensive systems are like way expensive. Think huge amount of zeros people, like way stupid numbers.

On a more positive note, Rick over there has generously offered to donate his remote controlled airplanes so we have an airforce. Hey no chuckling, it's a start. "From humble beginnings" and such.

I'm also proud to say the kids spent all this morning patching up Burt's rubber rafts, thanks again Burt, so the navy is going to be officially re-launched in Matt Tanner's swimming pool later this afternoon. Now if you men could kindly refrain from dive-bombing them like you did last time we can use the dang things in manuevers. Yeah you Jeremiah, I'm looking at you and your little posse of idiots. I know you were involved, I got my eye on you. You really ruined those kids day. Little Burt just stood there and wailed. You should be ashamed of yourselves.

OK, look cut down the chatter, focus people, just a few more items and we're done. Radio silence people! Radio silence! Jeepers do you know what radio silence means? Thanks. Jeremiah you can stop looking at my daughter right now. I want your eyes right here. Right on mine.

OK so we were supposed to mobilize for or against Obama or something but obviously things just didn't work out. But I think when I write the briefing to HQ, I think we can all agree we had a good time yesterday and some important discussions took place. Little Burt is ahead in the horse-shoe league, let's stand him up and give him a big hand. Way to bounce back Little Burt. Get out there and kill 'em tiger.
Last thing is the poll is still open as to what to call ourselves. Right now "Flying Mongooses" is tied for "Lean, Mean Desert Machine" so feel free to continue to cast your votes.

I really feel it moving people, the R3VOlUTION. I feel really positive about the direction we're taking. That's about it. Jeremiah, you boys will find a few tubs of icy cold beer under the haystack out front. You boys load it up and fire up the grills over at Matt Tanner's place. That's an order soldier, snap to it. We'll be along directly.

So those of you remaining, stay put for a fascinating presentation about our evolving foil-hat technology from Clyde. For those of you just coming in, hey! Only one donut! One donut apiece you guys! Marybeth! Sam took two donuts, I saw him! Marybeth! I hope you guys know we got you on surveillance video!

It's all fun and games until my son knocks up your daughter.

I've said it before and I'm saying it again:

Oyate, you are one seriously funny sonofabitch!

Are they coming for your Kids ? The Simpsons

Mandatory Fitness Passports - or be banned from society

Why Jobs Are Bad For America

SHOW ME THE SCIENCE: Bill Maher on Covid