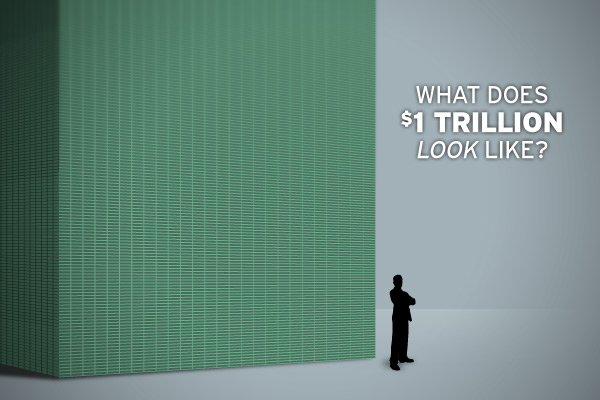 Trillion AIG Tarp billions millions currency denomination mint stimulus bill gates berkshire
What Does $1 Trillion Look Like?  By Paul Toscano  Graphic: Paul Alvord for CNBC.com
Throughout the financial crisis, huge sums of money have been spent, handed out and lost. With talk of billions upon billions being passed around, it’s easy to lose perspective on how much $1 trillion or even $1 billion really is.

With official measurements of American currency from the US Bureau of Printing and Engraving and the US Mint, here’s some perspective on what these huge sums of money would actually look like and how they would compare to every day objects.

What would the money allocated to the TARP actually look like? How high would the AIG bonuses pile up if the bills were stacked one on top of another? How big, literally, is the National Debt? 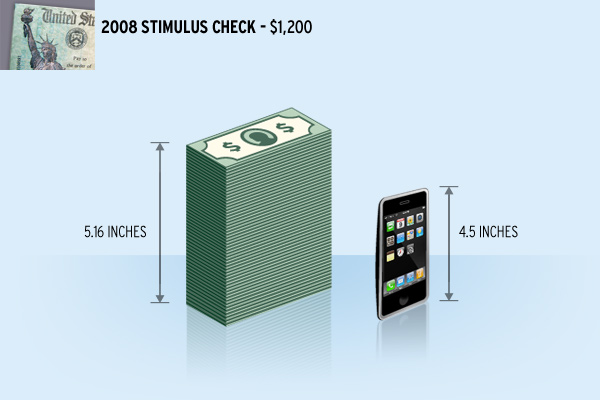 A single share of Class A Stock of Berkshire Hathaway, the holding company of Warren Buffett, is among the priciest individual stocks traded on the market. If one share at current market value of $90,000 (as of 4/2/09) was converted into $1 bills, the column of cash would rise 32 feet, approximately 3/4 the height of a standard American utility pole (40 ft). 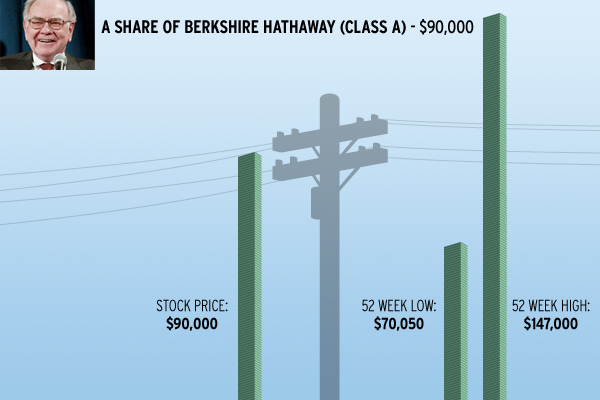 The 2008 AIG Bonuses (prior to their promised return to the US government), if denominated in $100 bills, would measure 591 feet, stretching approximately 40 feet above the height of the Washington Monument.

If denominated in $1 bills, laid one on top of another, the stack would measure 59,125 feet, extending into the stratosphere and topping off at the lower extreme of the Ozone layer. It would stretch to more than twice the altitude of the highest clouds in the sky, and the stack would approach the service ceiling of an F-22 Raptor fighter jet.
AIG Bonuses - $165 Million 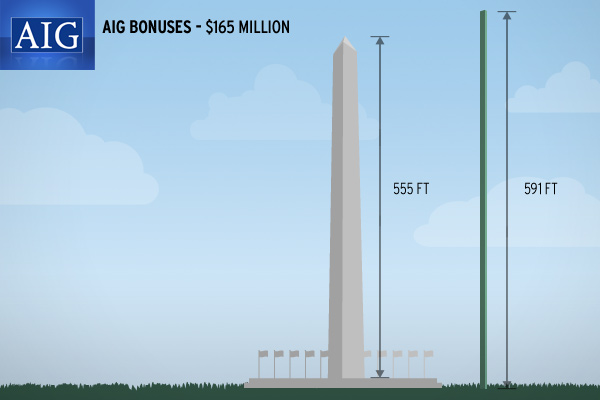 This year, Bill Gates was once again named the world’s richest man by Forbes, with a net worth of $40 billion. If this amount was denominated in $1 bills, this stack would measure about 2,714 miles, which is approximately the distance between Miami and Seattle.
Bill Gates’ Net Worth - $40 Billion 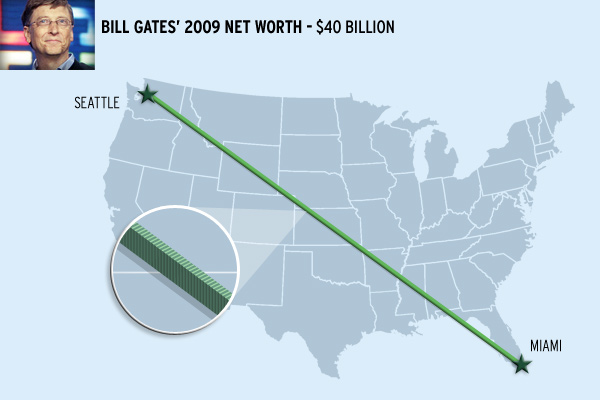 In the largest Ponzi scheme in history, Bernard Madoff defrauded thousands of investors for approximately $50 billion. That physical amount of money would be difficult to transport, even in large denominations. If you had $50 billion in $100 bills, the sheer volume of the currency would be just under 20,000 cubic feet, enough to fill 33.5 “Super 18” dump trucks to capacity.

The Super-18 models are among the largest street-legal dump trucks currently available on the market, with 18 wheels and a hauling capacity of 22 cubic yards each.
Madoff’s Ponzi Scheme - $50 Billion 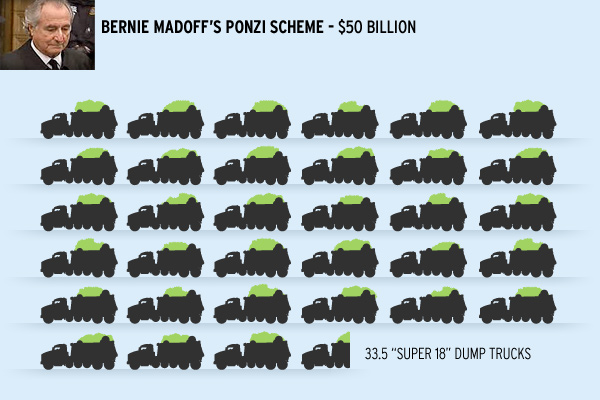 With the potential failure of AIG posing considerable systemic risk, the government has poured a total of approximately $173 billion into the company to avoid disaster.

This amount would be massive (literally) if handed out in cash, weighing approximately 1,907 tons when denominated in $100 bills.  That amount would weigh just short of four Boeing 747-8 jumbo jets at their maximum takeoff weight of 975,000 lbs, or 485 tons.
AIG Gov't Bailouts – $173 Billion 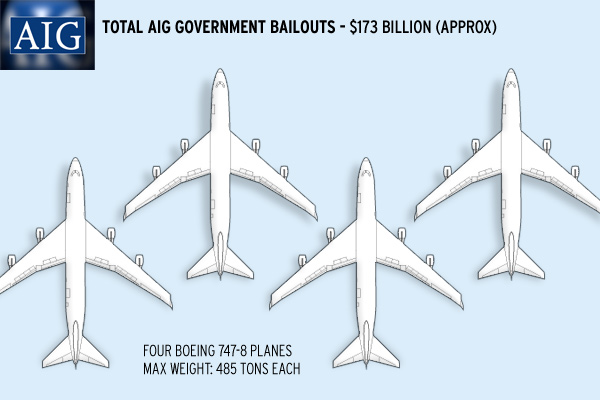 With the largest market cap among U.S. companies, Exxon Mobil’s value of publicly traded shares is over $345 billion (as of 3/31/09). If this amount was denominated in $100 bills, the block of Benjamins covering the area of a standard American football field would stack to a height of about 28.7 feet. 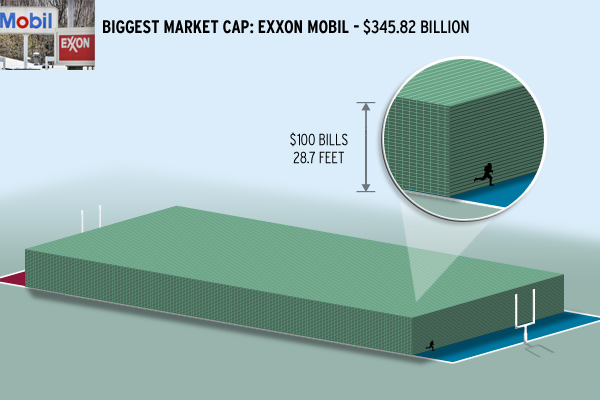 The Troubled Asset Relief Program (TARP) was implemented in order to stabilize the country’s financial system, but has been heavily criticized for the unprecedented volume of money involved: $700 billion.

If this amount of money was denominated in $100 bills, the sheer volume of cash would be enough to fill to capacity 62 BethGon II high capacity railroad freight cars, according to information from FreightCarAmerica.


For a train moving at 30 mph, and at 48 feet per car, it would take about 1 minute, 12 seconds for this money train to pass you by. If the TARP amount was denominated in $1 bills, the train would be 6,175 cars long, stretching over 56 miles. At 30 miles per hour, it would take this train approximately 1 hour 52 minutes to pass you by.
TARP - $700 Billion 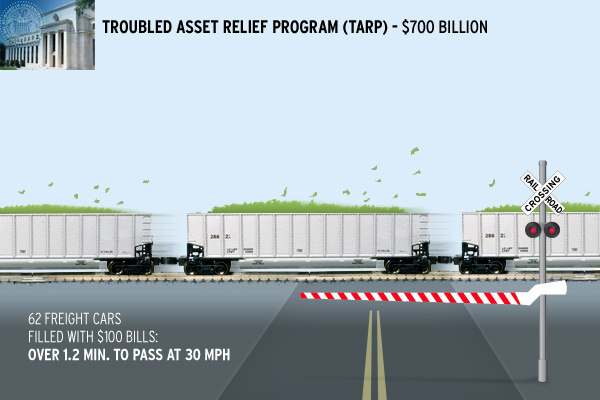 With several big spending plans brought up in the past few months, including Federal Reserve program to buy Treasury Securities as well as the Public-Private Investment Program, the total cost of these individual plans has been estimated to be as much as $1 trillion. This stack of cash - in $1 bills - would measure 67,866 miles, stretching approximately 2.72 times around the Earth’s equator.

If denominated in $100 bills, $1 trillion would be enough to fill 4.5 Olympic-sized swimming pools, with a total volume of 398,000 cubic feet. For comparison, there is only about $625 billion worth of $100 bills currently in circulation, according to the US Treasury bulletin, which would fill about 2.8 Olympic swimming pools. 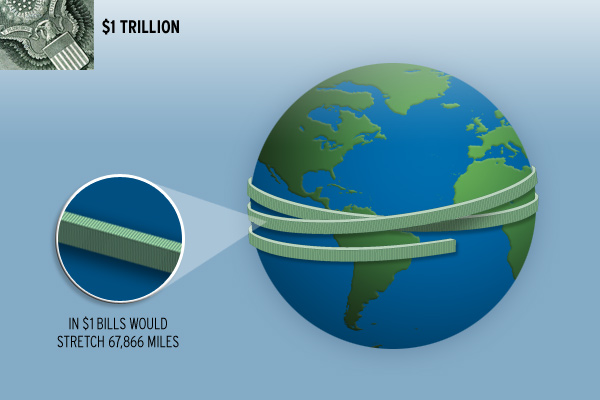 At its maximum flow, water rushes over Niagara Falls at approximately 100,000 cubic feet per second, according to the Niagara Parks association.

At this rate, if the value lost in the S&P 500 (between the October 2007 high and the market’s open on March 31, 2009) was denominated in quarters, the volume of coins would take approximately 1 hour 59 minutes 22 seconds to pour over the edge of Niagara Falls. 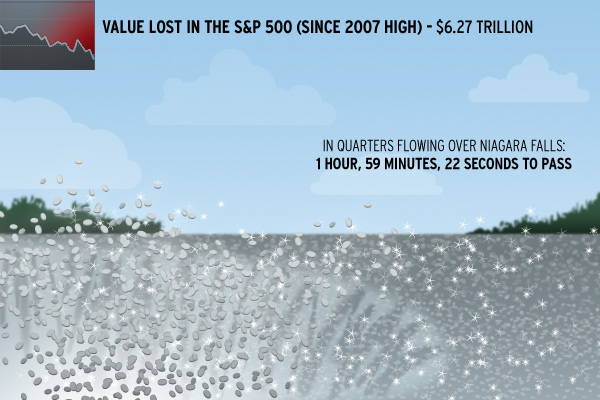 The mounting US National debt, growing by billions every day, has recently topped the $11 trillion mark.  If denominated in $1 bills, the cash would stack as high as the tallest building in the world, the 2683.7 foot Burj Dubai skyscraper… 1,474,918 times. At this height, it would create a block of bills with a base approximately twice the size of the Empire State Building's, which is just under the size of three American football fields.

If consolidated into a single stack of $1 bills, it would measure about 749,666 miles, which is enough to reach from the earth to the moon twice (at perigee), with a few billion dollars left to spare. If the amount was laid out, the area of the $1 bills would cover the state of Rhode Island three times over, and in $100 bills the amount would carpet about 3/4 the area of Washington DC.

It is also interesting to note that this number is approximately 13 times the amount of US currency in circulation, according to the Treasury bulletin, which lists the amount at $853.6 billion as of December 31, 2008.
US National Debt 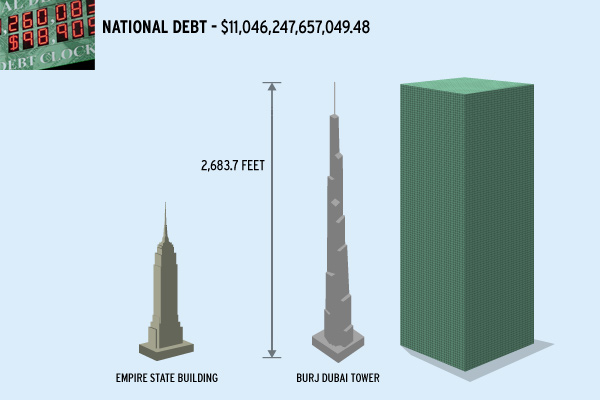