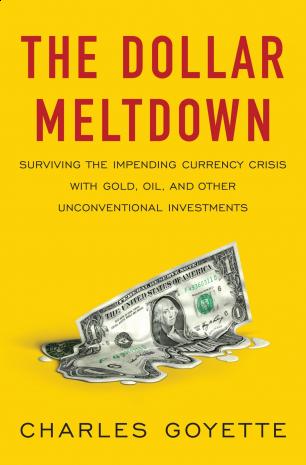 If you have not gotten the hardback, audio or Kindle version of this book then you must get the newly released paperback version of "The Dollar Meltdown" with new preamble.  If readers had paid attension to his suggestion to buy silver they would be 60% better off in one year than holding onto their dollars.  My opinion has not changed with the passage of time: This is the one book to get to survive the coming dollar meltdown.  And there is not much time.
-- Powell Gammill, Nov. 8, 2010

This Thursday, October 29, 2009, marks the release of a new book I highly recommend.  If you have woken up to the feeling that something is terribly wrong with our economy, especially your economy.  The main stream media is daily rushing to assure you that the worst is over and your life is getting better.  If you want to know what is really happening to your savings, your earnings, your pensions and your country then don't walk, RUSH out and buy the new book, The Dollar Meltdown!   Written in easily understood prose, author and radio talk show host Charles Goyette presents his case on what is happening to the U.S. dollar, why it is happening, who is responsible and most importantly how you can survive it.

Charles Goyette brings three things to the table to devastate politicians and so called "bankers."  First his wonderful organizational and  communication skills that have served him well as both an orator and a writer.  Second, his fantastic memory that pulls together decades of reports on governmental and corporate theft that has built up into the mess we inevitably will be forced to now live through.  Third, his lifelong honest pursuit of the facts and at personal cost his willingness to stand against the lying politicians and corporate heads who only want to mislead people away from the truth of their looting. 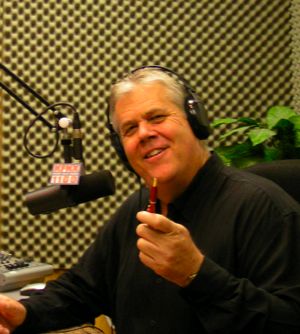 He has worked in most aspects of radio since he was in his teens.  He has been both suppressed and  fired for opposing the unprovoked invasion of a nation.  He has exposed the lies of the press and the political elite.  He has done this with a polite demeanor that has always allowed other opinions or dissent to voice their thoughts and statements on his shows.  And he has followed economics throughout his life.

In his new book he makes it indisputably clear that there is no mathematically possible way the U.S. dollar is going to survive the massive debt that is exponentially building upon every man, woman and child -- including many generations yet born --  even if there was the political will to try to rein in the government debts. He instead explains why it is in the  interests of the political rulers to keep up the staggering accumulation of debt and for them to actually look forward to the eventual massive inflation and debasement of the currency that is accelerating.

He explains why some people have set out to deliberately destroy the U.S. dollar in order to get rich.  He names names and institutions, peppered with examples.  In the end, like prosecutor, he has made a case that the U.S. economy has been stolen by a few who rule or buy the ones who rule.

But thankfully he doesn't stop there.  If you can't stop something bad from occurring, then you must survive it.  And here Mr. Goyette lays out his ideas in over a third of the book on how to survive "The Dollar Meltdown."  And understand, he is not predicting another disastrous few years of inflation and recession like the Jimmy Carter years...he is making the case for hyperinflation as bad as it gets.  Perhaps Zimbabwe bad.  He is talking unemployment as bad as it gets.  He is talking lack of material goods as bad as it gets assuming you could afford them in the first place.  His honest answers on how to protect yourself and your family, and perhaps counsel your friends and neighbors are the most valuable thing about the book.

Yes, it is good to know whom to hang, but it doesn't do much good if you don't survive.  This is the one must get book of the year.  It is an easy read and it will get you angry.  The dollar is soon done for---find out why and how to survive it's collapse.

My criticism are, I am old and the type is small.  There are no references which I consider inexcusable, though there is no doubt that would have added quite a few pages to the book's length.   There really should have been a brief biography on Charles in the opening prologue...it is confusing to immediately step into a historic conversation between Charles and a guest caller from a past show at the beginning of the book.
Disclosure: Charles Goyette is a friend of mine, and while I can assure you I would not write these things unless I believed them, you can weigh my words accordingly.

Judge rules Snowden to give up millions from book, speeches

MKULTRA and the CIA's War on the Human Mind

Nobody Could Have Imagined