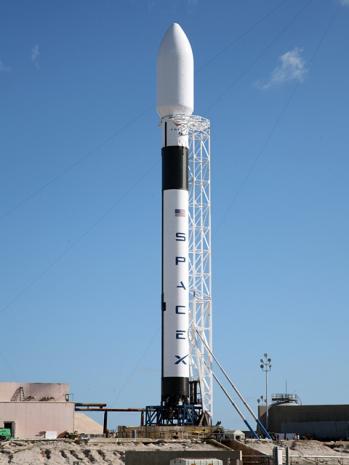 The SpaceX team kicked off 2010 with the successful full duration orbit insertion firing of the Falcon 9 second stage at our Texas test site (details below). This was the final stage firing required for launch, so the second stage will soon be packaged for shipment and should arrive at Cape Canaveral by end of month. Depending on how well full vehicle integration goes, launch should occur one to three months later.

2009 was an exciting year for SpaceX. In July, with the successful launch of RazakSAT, Falcon 1 became the first privately developed liquid fuel rocket to put a commercial satellite in orbit. That same month, DragonEye--SpaceX's Laser Imaging Detection and Ranging (LIDAR) sensor--launched on NASA's STS-127 shuttle mission and successfully completed flight system trials in preparation for guiding the Dragon spacecraft as it approaches the International Space Station. We also hosted the first astronaut training day at our Hawthorne headquarters in preparation for flights to the Space Station.

The ongoing evolution of the commercial space industry was recently featured as the cover story ("The New Space Rush") in Popular Science magazine. The article provided a great perspective on the industry as a whole, but I disagree with the subheading, "Who Needs NASA?". If you read the article, it's clear their intent was just to convey excitement for the developments in commercial space, but obviously NASA is and always will be critical to the future of space exploration, particularly at the outer edge where there is no commercial market. Without NASA, SpaceX certainly would not be where it is today.

As we get closer to our first Falcon 9 launch, SpaceX would like to thank NASA, the Air Force, the FAA and our commercial customers for their continued support. And, of course, I would like to thank the whole SpaceX team for their unwavering commitment to our company and our mission, especially over these last few months. Through their hard work and dedication, 2010 promises to be another great year.

Prior to arrival at the Cape, the Falcon 9 first stage arrived at our Texas Test Site. There, we did a full checkout, raised it up to the top of the 72 meter (235 foot) tall test stand, and conducted two successful nine engine test firings – the first 10 seconds long, followed by a 30 second long firing three days later. 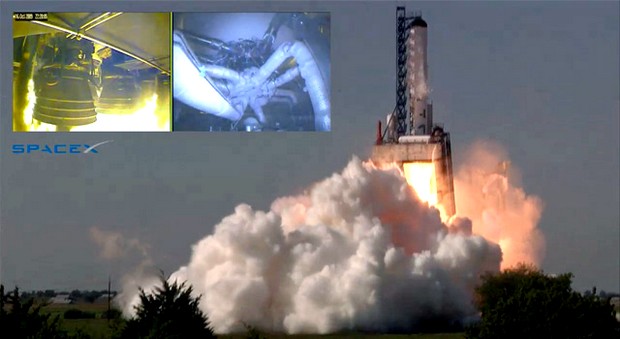 Test firing video (click on image) of the full flight first stage of Falcon 9, conducted Oct 16, 2009 at the SpaceX Texas Test Facility in McGregor. Click to play video, and note the engines gimballing (steering) in the upper left camera.
Everything performed as planned; we then shipped the first stage to Florida and have commenced final processing in the hangar at the SpaceX launch site. Once all propulsion and avionics checkout processes are complete, we will move forward with stage mate, to be followed closely by vehicle transfer to the transporter erector, and a static fire shortly thereafter. 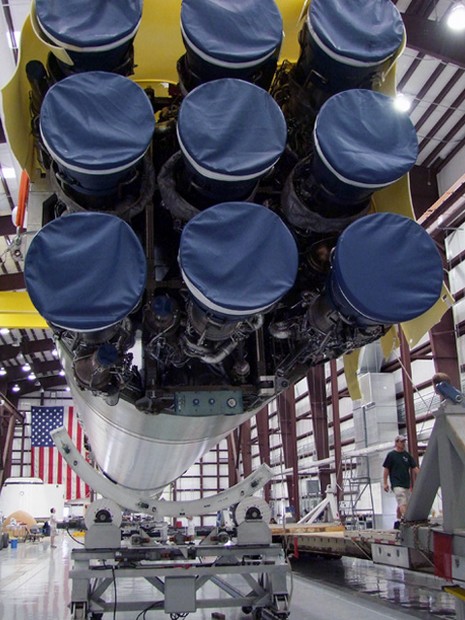 Flight hardware for the Falcon 9 second stage also shipped to Texas, where it completed static load testing, and then was integrated with the previously tested Merlin Vacuum second stage engine. After performing system checkouts, we raised the stage up on to the newly completed Upper Stage test stand. 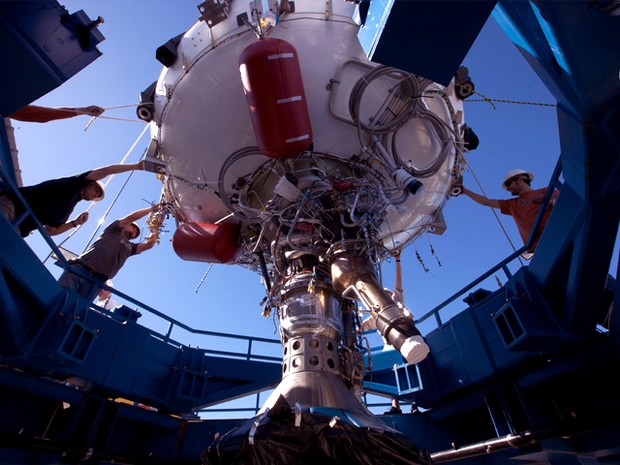 In November we conducted the initial second stage test firing lasting forty seconds. This test involved a new test stand, a new flight stage, and it occurred as planned, on the first attempt without aborts or recycles. 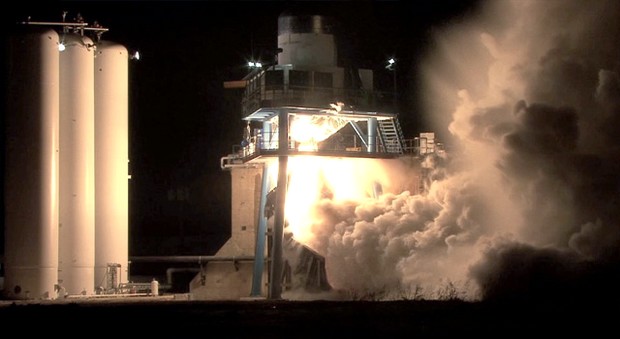 On January 2, 2010, the team completed a full duration orbit insertion firing (329 seconds) of the integrated Falcon 9 second stage. At full power, the Merlin Vacuum engine generates 411,000 N (92,500 lbs force) of thrust, and operates with the highest performance ever for an American-made hydrocarbon rocket engine. 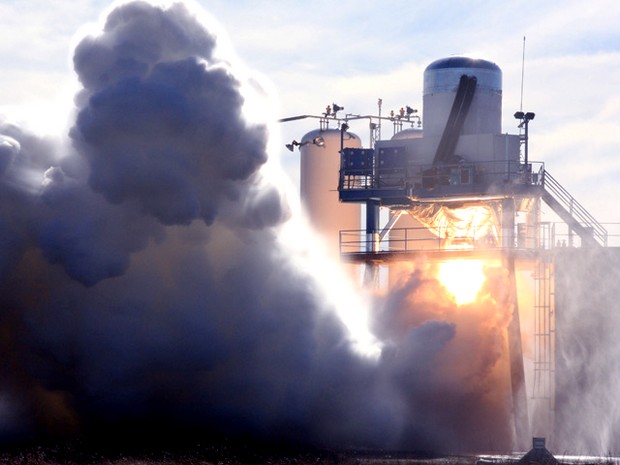 Having multiple stands for testing individual engines, first and second stages, and Draco thrusters allows us great freedom in processing hardware for flight. Our manifest currently lists more than twenty-five Falcon 1e and Falcon 9 missions, seventeen of those with Dragon spacecraft, so all of our stands will be kept very active.

We recently fabricated and formed the first flight expansion nozzle for the Merlin Vacuum second stage engine. Made of a thin, high temperature alloy, the large expansion nozzle extends from the regeneratively cooled portion of the engine, and improves its performance in the vacuum of space. Standing 2.7 meters (9 feet) tall and 2.4 m (8 ft) in diameter, it resembles the nozzle used on our Falcon 1's second stage engine, only larger. 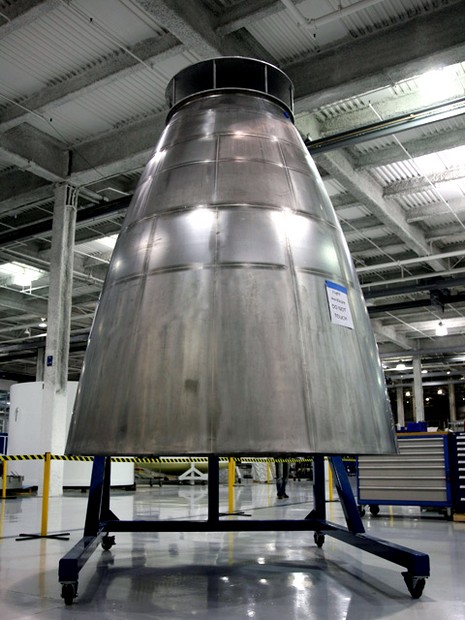 The Merlin Vacuum engine expansion nozzle measures 2.7 meters (9 feet) tall, and most of it has a wall thickness of about 1/3 of a millimeter (1/64 of an inch). Photo credit: SpaceX.

The top edge of the interstage contains a set of clamping collets that join the first and second stages during liftoff and ascent. After the first stage shuts down, the collets release, and three pneumatic pushers smoothly and forcefully separate the stages, clearing the second stage engine for ignition.

We recently conducted a series of full-scale tests verifying the performance of the separation system under a variety of load conditions. We placed the fully configured interstage in the Falcon 9 structural test stand in Texas, and mounted a large mass on top to simulate the second stage. During testing, the collets release the stage and the pushers force the simulated second stage high into the air. See video below. 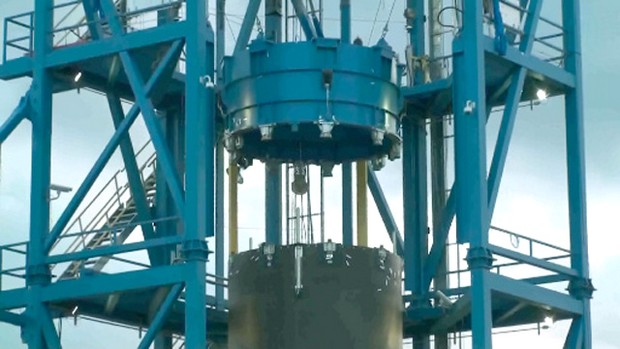 The Falcon 9 interstage (black cylinder at lower center) pushes away the simulated second stage (blue cylinder above). A series of restraining cables and counterweights capture the load and prevent it from falling downwards. Click on image to play video.

This stage separation system resembles a larger version of the one successfully used on our Falcon 1 vehicle. Note that this system uses no explosives, making it safer to assemble and deploy, and increasing its overall reliability, as we can conduct multiple tests of every flight component, whereas an individual explosive device carries the risk of being fully testable only once – in actual use.

In addition to the stage separation system, the interstage also houses the parachute system that will aide in first stage recovery. Our Cape team has mated the interstage to the first stage and continues to finalize vehicle wiring in preparation for complete vehicle integration. 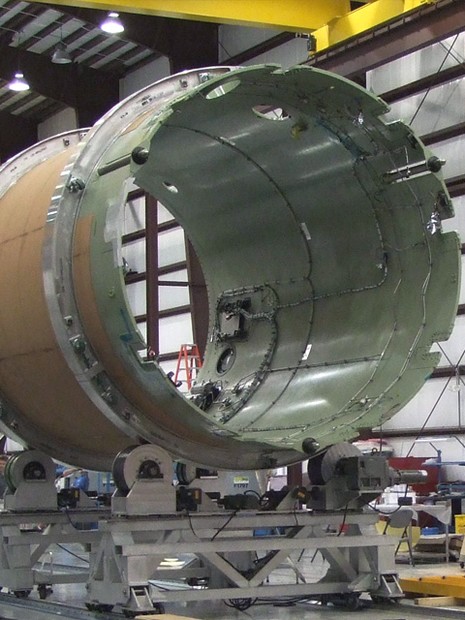 The Falcon 9 flight interstage in the Cape Canaveral launch site hangar prior to mating with the first stage. Photo credit: SpaceX.

The inaugural Falcon 9 flight will loft our Dragon qualification spacecraft into orbit. After completing testing in Texas, the Dragon spacecraft shipped to the Cape in preparation for first flight. 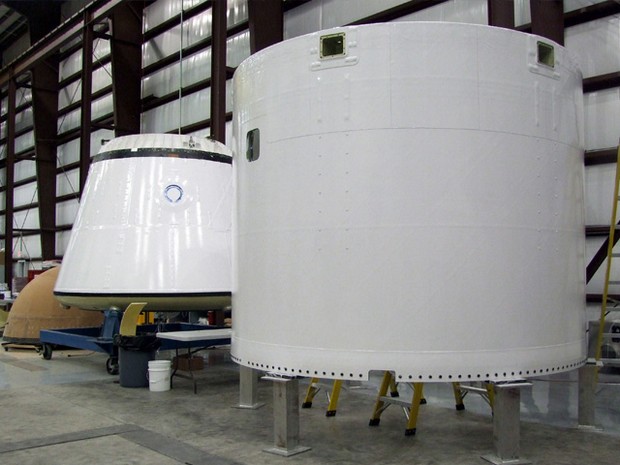 In preparation for flight, the Dragon spacecraft was mated to the trunk (see below), which in future flights will house both unpressurized payloads and the vehicle's solar panels. By flying the Dragon spacecraft configuration, we will obtain valuable data about its performance during the climb to orbit, which will support the following Falcon 9 flight – the first launch under the NASA Commercial Orbital Transportation Services (COTS) program. On that flight, an operational Dragon spacecraft will make several orbit of the Earth, followed by reentry and splashdown in the Pacific Ocean off the coast of California. 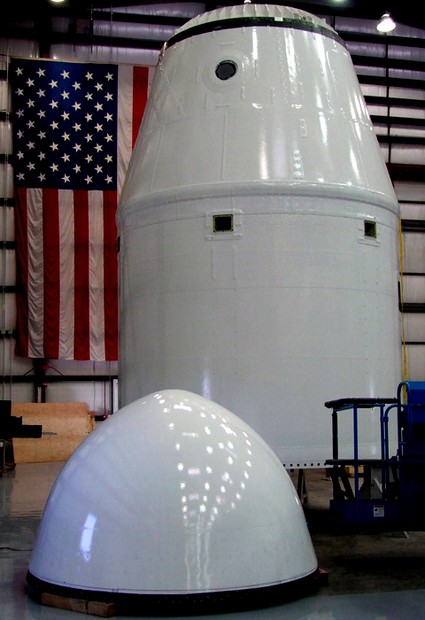 Pressurized portion of the Dragon spacecraft, top, mated to the cylindrical unpressurized trunk section below. As Dragon has been designed from the start for human transport, even the cargo and demonstration versions include windows (circle at top, covered for protection during painting). Photo credit: SpaceX.

As the flight hardware converges on Florida, many significant activities continue around our launch site in preparation for first flight.

The Falcon 9's four-part launch mount assembly performs several significant tasks. At rest, it supports the fully fueled Falcon 9, with a mass of over 330,000 kilograms (nearly three-quarters of a million pounds). Next, as the first stage's nine Merlin engines fire and reach full power of nearly 5 MN (over 1 million pounds force), the mounts must hold the vehicle down against the upward thrust.

Finally, upon command, the mounts release the rocket and then move out of the way, giving the nine engines maximum clearance as they lift the vehicle away from Earth.

Months of construction and testing converged into a series of final tests of the launch mount system. The four mount towers were attached to the base of the Transporter / Erector, and their hydraulically powered actuators checked to verify performance.

We then conducted a set of live load tests that simulated the significant downward and upward forces present during the launch sequence. We placed an actual Falcon 9 truss (the structure that joins the nine Merlin engines to the vehicle) into the launch mount, and used a crane and pneumatic cylinders to simulate the forces at liftoff. On command, the launch restraints let the truss fly free. See the video below. 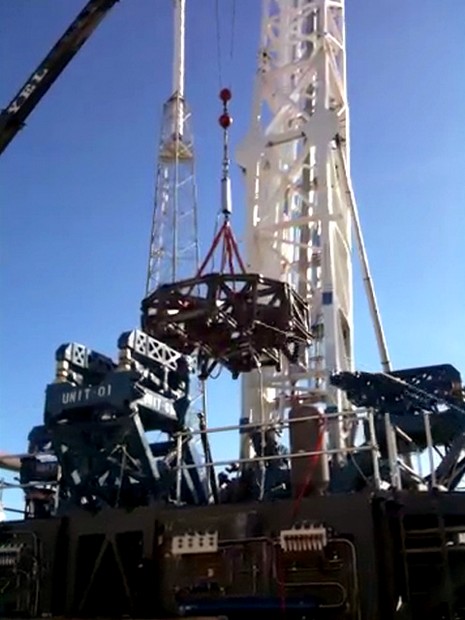 Launch mount system test, with a crane pulling up on a Falcon 9 engine mount truss to simulate the forces it will experience at liftoff. After releasing the rocket, the mount towers move back to give maximum clearance to the departing vehicle. Click the image to play video. 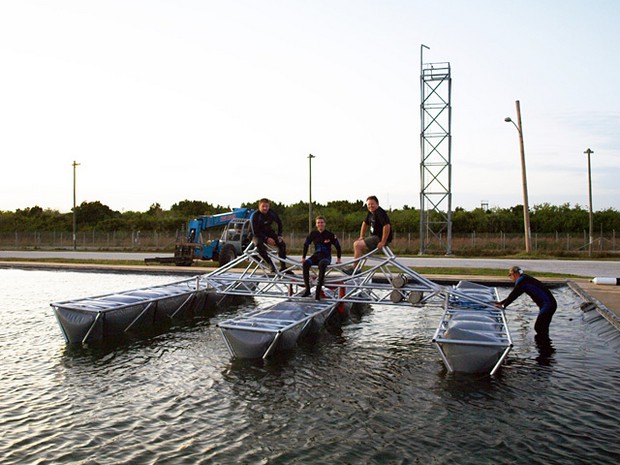 Flotation testing of a portion of the recovery raft that will aid in returning the Falcon 9 first stage to land after flight. Photo credit: SpaceX.

Other progress at SLC-40 includes:

- Completion of the liquid nitrogen delivery system and final fill of 4,900 gallons to the site's storage tank.

- Functional testing of the new helium fill system. During loading, we chill the Falcon 9's helium storage tanks down to minus 184 degrees C (minus 300 degrees F). 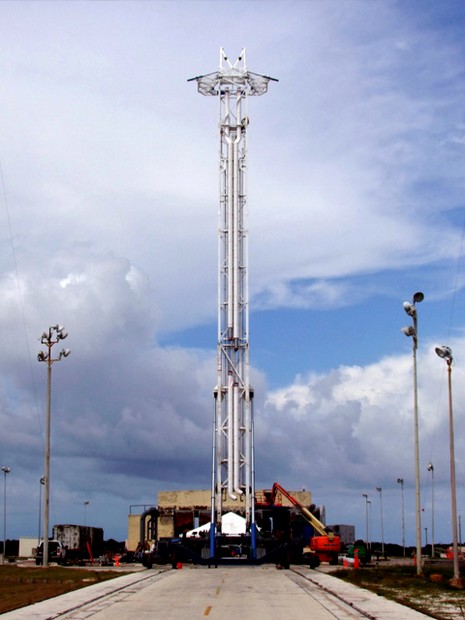 - Multiple test deployments of the Transporter / Erector system (shown above), and the addition of vehicle fill and drain plumbing and umbilical support systems.

- Flow tests verifying the systems that will apply large amounts of water to the launch pad to provide noise and fire suppression during liftoff.

Back at our Hawthorne, California headquarters in mid-October we conducted a complete end-to-end test of our Dragon radio communications system with the NASA geosynchronous Tracking and Data Relay Satellite System (TDRSS). 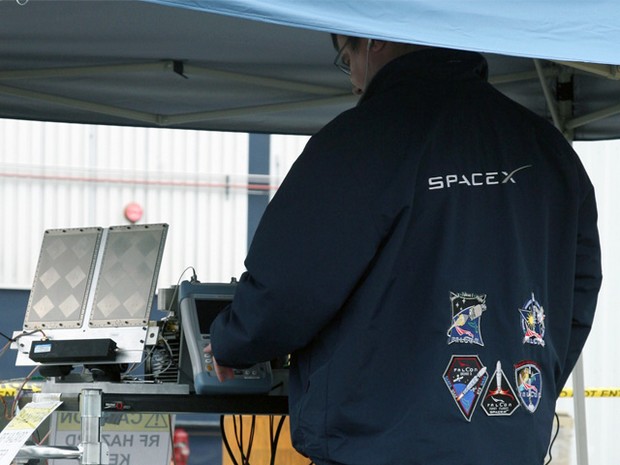 The SpaceX communications flight hardware, developed with subcontractors Delta Microwave (Low Noise Amplifier), Quasonix (transmitter and receiver), and Haigh-Farr (antennas), emulated a complete Dragon spacecraft comm link, and successfully sent and received data through the TDRSS network. Commands were dispatched from our Hawthorne headquarters command station, to NASA JSC in Houston, across Texas to the TDRSS White Sands Ground Terminal, up to the TDRS 5 Spacecraft in geosynchronous orbit, and back down to the Dragon receiver on the ground in Hawthorne.

The test series demonstrated telemetry and command transmission at a variety of data rates up to 2.1 Mbps, and paves the way for using TDRSS on all fifteen of our Dragon missions for the COTS and Commercial Resupply Services (CRS) programs.

Also in Hawthorne, we recently completed a very successful joint mission simulation with NASA's Mission Operations Directorate where the team rehearsed the operations that will be conducted during the second COTS flight (the third Falcon 9 launch).

During that mission, dubbed "C2", a Dragon Spacecraft will approach within 10 kilometers (6 miles) of the International Space Station, and check out navigation, communication and control systems in preparation for actual approach and berthing with the ISS. 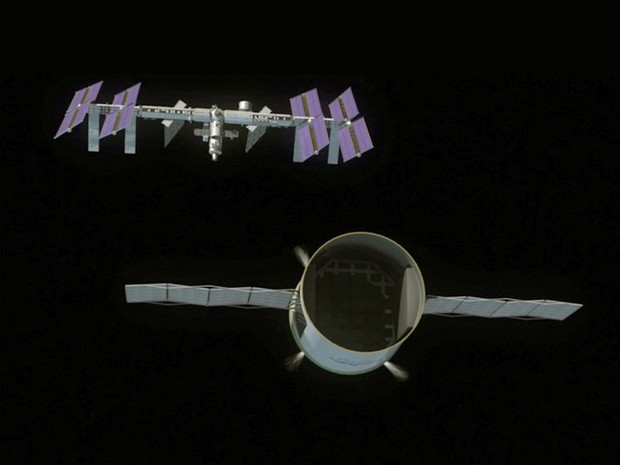 These tests help us progress towards the day when SpaceX will begin a series of twelve CRS cargo delivery missions for NASA to support the continued operation of the ISS.

Stay tuned for more Falcon 9 updates in the coming weeks as we head for launch in early 2010.