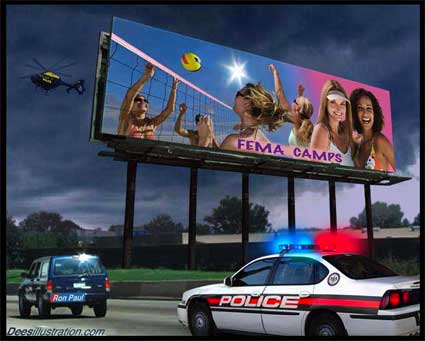 We couldn't agree with Sal Reza more when he says, "There was provocation by some groups who came here for their own purpose to disrupt a peaceful march."

We couldn't agree with Sal Reza more when he says, "There was provocation by some groups who came here for their own purpose to disrupt a peaceful march." We know he isn't talking about us, because he invited members of the Diné, O'odham, anarchist/anti-authoritarian bloc on stage to speak at the rally at Falcon Park.

So, who is the outside faction Sal's talking about? In our opinion it must be the Phoenix Police. Unprovoked, a female officer on horseback (who later covered her name on her uniform) charged her horse headlong into the march, colliding with several people and in the process almost running over at least one child in a stroller. After attacking families and protesters, she then whipped out her pepper spray and let loose on the whole crowd, who fled the noxious spew. In the process, children were blasted with pepper spray.

After that, other Phoenix PD officers stormed the crowd, violently attacking marchers, dragging several to the ground and further deploying their chemical weapons from all directions in an attempt to justify their their aggression by nabbing a few people. Dozens were so affected that they were soaked in chemicals, having to strip off clothes to stop the burning. Street medics (not Phoenix Fire Department) and other protesters came to each others' aid. At the end of the melee, out of the more than a hundred that marched together, four of our comrades were in chains and countless others stood bleeding, bruised and momentarily stunned.

Still, shaking it off, we rallied, facing down the cops, until eventually they withdrew. We celebrated and took turns speaking out about what it's like to be under attack by a system that values property and power over people.

Indeed, during the entire march the Phoenix police had been provoking marchers. Riding bikes and golf carts into people. Pushing and shoving. For what? To keep one northbound lane open? Rather than assaulting people expressing their legitimate desires to see an end to oppression, why not shut down the street? Cops do traffic control all the time. What's wrong with PPD? Why, for instance, is it somehow possible for Tempe PD to shut down Tempe streets tomorrow for the corporate schlock that is "PF Chang's Rock n' Roll Marathon" tomorrow but not for PPD to close off a few streets so that people can assemble without threat of attack? Truly a backwards system indeed!

The police have so far put forward several different explanations for what happened, all of which contradict each other. On one channel they say that they were breaking up a fight. On another they say that people were throwing bottles. And on and on. What'll it be in five minutes, we wonder? The contradictory stories ought to be your first clue that what they're claiming happened didn't in fact happen. No surprise that the media swallowed it. But if we know they're lying, we have to wonder why anyone else would defend their actions?

Did people fight back against the police assault. We don't know because our eyes were full of pepper spray, but we wouldn't begrudge them if they did. To be charged into by a twelve hundred pound horse, while attacked by thugs using chemical weapons necessarily evokes the instinct to fight back, especially when your enemy is so vile as to assault children. Police demand the impossible from people. They expect you to allow them to attack you while at the same time demanding that you suppress you gut, human tendency to defend yourself. There is nothing "peaceful" in that relationship. That sort of power relation is one that condemns those who resist while exonerating the violence of those from above. It reflects the current distribution of power -- a distribution we want to change drastically. This is as unnatural as fighting power without taking action. Movements, like people, have a right to self-defense. For us, that has to be in the form of direct action and civil disobedience against the system. It must be made not to work unless our demands are met. No more mediation through shady politicians. No more appealing to power through moral arguments. We can take our futures into our own hands, directly.

Still, we're not surprised that the police attacked. While it seems the leaders of the movement are eager to make excuses for police who attack children, we know that what we saw today is but a glimpse of what the cops do everyday. We see it with our own eyes. They are the outside, alien force that first and foremost defends white supremacy and capitalism. How can someone say they are organizing a "peaceful march" when they work with such sadists? Naturally they were going to attack the march eventually, especially considering the militaristic fashion in which they deployed. Phoenix PD deports more migrants than Sheriff Joe and yet we are told that we ought to give them a pass so that we can focus on that clown Arpaio? We saw today just how foolish that strategy is.

In our eyes, this is but a symptom of the failure of the strategy being pursued by the movement as it is. White supremacy in Arizona goes far beyond one ancient sheriff in one county. Ballot measures attacking people of color will almost certainly pass in Arizona yet again this year with 70 or 80 percent margins. Is this Sheriff Joe's fault? Obviously not. But marches against Joe won't stop that.

We need a broader movement with a critique beyond Joe so that we can challenge the whole problem -- one that stretches from Tohono O'odham land down south to the land of the Diné up north. And everywhere in between. And we need to break from this mode of organizing that can only deliver more oppression and more violence down on our heads. No more politicians. No more working with cops. Look what it brings.