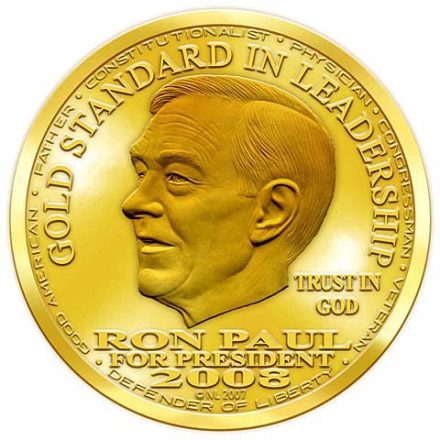 by Ron Paul
Much has been made recently about the supposed economic recovery.  A few blips in a few statistics and many believe our troubles are all over.  Of course, they have to redefine recovery as “jobless” to account for the lack of improvement on Main Street.  But the banks have money, Wall Street is chugging along, and the administration would like to get on with other agendae.

They have even set up a commission to investigate the crisis as if it were all in the past.

The truth is that Americans are still losing jobs, the Fed is still inflating, and more regulations are in the works that will prevent jobs and productivity from coming back.  We are on this trajectory for the long haul.  The claim has been made many times that this administration has only had a year to clean up the mess of the last administration.  I wish they would at least get started!  Instead of reversing course, they are maintaining Bush’s policies full speed ahead.  They are even keeping the Bush-appointee in charge of the Federal Reserve!  They are not even making token efforts at change in economic policy.  And for all the talk of transparency, we hear that some powerful senators will do all they can to block a simple audit of the powerful and secretive Federal Reserve.

We have been on a disastrous course for a long time.  The money supply has doubled in the last year, our debt is unsustainable, the value of the dollar is going to continue its drop, and those Americans who understand where we are headed feel helpless and held hostage by foolish policy makers in Washington.  When the bills finally come due and the dollar stops working we are in for some real social, economic and political chaos.  That is, unless we take some major steps now to allow for a peaceful transition in the future.  These steps are laid out in my legislation to legalize competing currencies.

The Federal Reserve is a government-sanctioned banking cartel that has held far too much power for far too long and is in the end stages of running the dollar into the ground, and our economy along with it.  The very least Congress can do, if they are not willing to abolish the Fed, and perhaps not even conduct a serious audit of it, is to allow citizens the freedom to defend themselves from being completely wiped out by their monopoly power.
source

A little bonus from the CONgressional floor (video):

Look at what your loyal FP local reporter wrote for you toward the end of last year.....

The Evil of Fiat Money and the Fed

China Moves Away From US Dollar, Ahead Of Digital Yuan