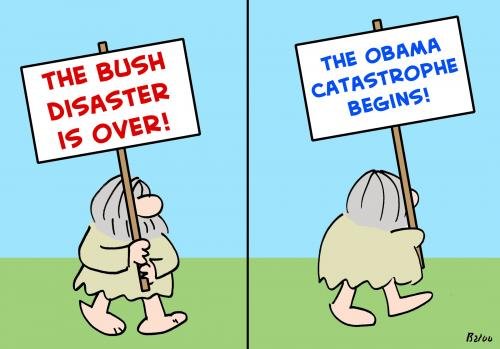 The response to Obama's first State of the Union address was predictable. Democrats loved it. Republicans were skeptical to critical, while the media tried to have it both ways.

The New York Times called his tone "colloquial, even relaxed" in quoting him stating "the worst of the storm has passed," then The Times saying "Americans are concerned, even angry." He urged Democrats not to "run for the hills," called for an end to "tired old battles," and focus(ed) intently on the issue of most immediate concern to the nation, jobs."

A Times editorial headlined "The Second Year," saying "The union is in a state of deep and justifiable anxiety about jobs and mortgages and two long, bloody wars. President Obama did not create these problems, and none could be solved in one year. (He) used his (address) to show the country what he has learned and how he intends to govern in the next three years. (It) was a reminder (of his ability) to inspire with a grand vision and the simple truth frankly spoken. It was a long time coming."

A Wall Street Journal editorial headlined "Staying the Course (but) with a little more humility, and a touch more bipartisanship....But whether this outreach is anything more than rhetoric will depend on a change of policy." It "could be a long year," concluded The Journal.

CNN.com was more upbeat saying "Obama outlines ambitious agenda for 'lasting prosperity,' noting that the "president struck an optimistic tone and avoided lofty rhetoric in stating that the cost of inaction will be great."

The Washington Post's EJ Dionne called Obama "a conciliator (who's) willing to fight."

The Post's Eugene Robinson called his rhetoric "determined, patient, forceful, good-humored, at times even mischievous. He looked relaxed and in control. (For) the first time in months (he) reconnected with the language and themes that got him elected."

Time.com headlined "Confident Republicans Give Obama a Frosty Reception." At the same time, columnist Joe Klein called his speech "a terrific performance....easily digestible, user-friendly....but it was also a fighting speech....This was Obama at his best."

In its customary supportive role, The Nation magazine's Robert Dreyfuss headlined "Two Cheers for Obama on Foreign Affairs," saying "it was a pleasure to listen to (him), especially after eight years of his predecessor's alarmist warnings and warlike thundering (so) let's take a moment to appreciate Obama's speech last night."

The Nation's Melissa Harris-Lacewell called his address a "National Rorschach Test....given meaning by the viewer more than by the subject. (Obama tried) to break through this psychological angst....to remind Americans of the situational constraints he faces; to shift....despair back to optimism," and remind people that the crisis began under his predecessor. "As he has done exquisitely since the campaign, (he) contextualized these difficulties within a broader historical sweep (by) insist(ing) that the "American story....is replete with examples of gritty determination (to overcome) seemingly insurmountable obstacles."

From the Financial Times: "Obama pledges renewed focus on jobs" as his "number one" priority (while) at the same time pledg(ing) to right the economy and continue pushing for healthcare and financial sector reform."

"Tonight, President Obama presented a vision to the American people of a stronger union, a new foundation for prosperity and a thriving middle class. Working together, we will adopt a bold agenda for our economic growth."

Republican Senator Orrin Hatch called Obama "completely tone deaf (by) blaming all our problems on George W. Bush (and) doubl(ing) down on his commitment to a Washington-knows-best strategy that will only make matters worse."

From House Minority Leader John Boehner: "The American people were looking for President Obama to change course tonight, and they got more of the same job-killing policies instead."

As a candidate, Obama promised change, a new course, sweeping government reforms, addressing people needs, and "ensur(ing) that the hopes and concerns of average Americans speak louder in Washington than the hallway whispers of high-priced lobbyists...."

A year later, hope is disillusion, frustration, and anger over promises made, then broken with a growing awareness that Obama represents business as usual, a reality rhetoric can't change.

His top political, economic and national security officials are former administration members - from Wall Street, the military, and other key power centers for continuity, not promised change.

He presides over a bogus democracy under a homeland police state apparatus, embraces torture and political persecution like his predecessor, and continues unbridled militarism, imperial wars, and a shocking disregard for the law.

A January 27 Dana Priest Washington Post article revealed a secret Obama "hit list," the same policy George Bush authorized to kill US citizens abroad claimed to be supporting terrorism "against the United States or US interests," whether or not it's true.

He looted the federal Treasury for Wall Street, plans new monetary measures to control the world's money, and favors handouts to the rich at the expense of beneficial social change.

He wants all Americans monitored with a national ID card, favors preventive detentions for uncharged detainees, and opposes protection for whistleblowers and journalists to protect their identity.

His State of the Union address reflected "yes we can," "hope (and) change," and another pledge that "Tonight I want every American to know this: We will rebuild, we will recover, and the United States of America will emerge stronger than before....The time to take charge of our future is here," at the same time he invaded Haiti, occupies the country with 20,000 combat troops, obstructs essential aid from reaching millions, and claims it's a humanitarian mission.

Rutherford Institute president and constitutional lawyer, John Whitehead, says he's "afraid (of) the state of the nation" in his January 27 augustforecast.com article, citing "Ominous developments in America (that) have been a long time coming," covering some of the above perspectives and more.

"As national borders dissolve in the face of spreading globalization, (it's likely) that our Constitution....will be subverted in favor of international laws....The corporate media (act mostly) as a mouthpiece for government propaganda, no longer....as watchdogs, guarding against encroachments of our rights....We have lost our moral compass....Americans have largely lost the ability to ask questions and think analytically....we no longer have a sense of right and wrong or a way to hold the government accountable," the way Jefferson wrote in the Declaration of Independence - that when government fails the people, it's their right "to alter or abolish it," and replace it with one that works.

-- the illusion of "borrowing out way out of debt;"

-- America's "Bubble Economy (leaving) families, companies, real estate and government so heavily indebted that they must use current income to pay banks and bondholders," making it unavailable for goods and services; and

-- the "most dangerous belief that the economy needs the financial sector to lead its recovery by providing credit," when, in fact, Wall Street wrecked the economy by "predatory lending....casino gambling," and looting the federal Treasury to cover losses.

Hudson worried that Obama's speech would "celebrate this failed era." In fact, his policies embrace it, will continue to going forward, and proposing a discretionary spending freeze, the part most important to increase, is counterproductive and ludicrous. Specifically he said:

"Starting in 2011, we are prepared to freeze government spending for three years. Spending related to our national security (meaning militarism and imperial wars), Medicare, Medicaid, and Social Security will not be affected. But all other discretionary government programs will."

A Road to Perdition Agenda

Obama's rhetoric hides a failed agenda he'll continue, serving capital and militarists, not people in dire need. He wants more business tax cuts and windfalls to stimulate growth and new jobs, repackaged Reaganomics that cost record numbers of job losses in the past two years, well over 500,000 in December alone based on the broader household survey.

-- over four and a half million jobs were lost since Obama took office;

-- in 2009, a record 2.8 million homes were foreclosed, realitytrac.com saying "a massive supply of loans.... loom(s) over the housing market," many to become delinquent in 2010 and beyond, perhaps for years; and

-- an epic debt overhang crushes the economy, exacerbated by a $13 trillion giveaway to Wall Street; another $10.7 trillion pledged amounting to a virtual free money blank check; and similar largess goes for militarism and homeland security at a time dire people needs go begging.

Smooth rhetoric belies Obama's failed agenda, one he'll continue without progressive change under new leadership that cares, what neither party offers nor ever will with priorities leaving millions out of luck and on their own.

2 Comments in Response to Obama's Outreach to Americans: Empty Rhetoric, Business As Usual

Oblahblah keeps reaching not to Americans but for their pockets